Thank you SEGA for providing a review copy. 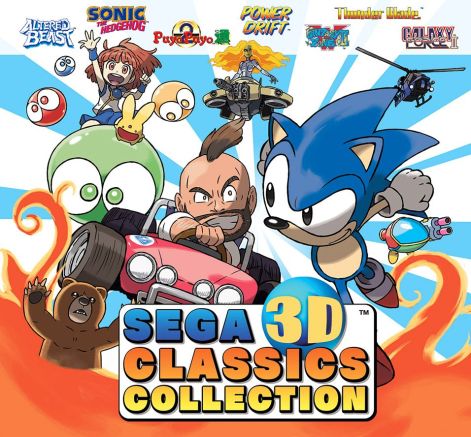 It’s the collection we’ve all been waiting for! SEGA 3D Classics Collection is.. Well.. A collection of a few classic SEGA games that were remade in 3D for the Nintendo 3DS by the game company known as M2.

If I were to have a one word review of this collection, it’d be described as Fantastic! All the games contained in this package translated into 3D very well. Especially Power Drift!

All the games also have their own set of settings, for example: Puyo Puyo 2 allows you to change the Difficulty. With Fantasy Zone 2 W, you can set the amount of lives you want to have at the start of the game. Depending on your favorite game genre, the games can be addicting. I was so addicted to Puyo Puyo 2 that I had to say to myself “Oh yeah! The review!”

There’s a game for everyone here, Shooters, Platformer, Puzzle, Racing, and even Side-Scrolling Beat-Em-Up! It’s a great “Time Waster” when you have nothing to do.

However, as good as this collection is, some games, when played in 3D, may hurt your eyes. The two examples are Power Burst and Galaxy Force 2. Some parts (If not all) of the User Interface really pop out and I mean… Really pop out. When trying to focus on your Space Ship or your Racer, the User Interface in 3D can be bothersome unless you have strong eyes in which case it probably wouldn’t bother you as much as it did to me. It’s really the first time I ever turned the 3D effect off. So if you want to experience the aforementioned games be warned of their 3D effect.

All in all, SEGA 3D Classics Collection is an amazing compilation. There’s many genres of games within it to make you try them out!

Though, it does have its problems, such as the 3D effect for some games that may hurt your eyes a bit if they’re not strong and the low replay value that almost all the games have.

I give this game an 8 / 10. It has its problems, but it is an amazing collection that will introduce you to games you probably never heard of which is always a plus!

+Great Pick Up and Play Game

I consider myself an expert of the Super Mario and Index Series.
View all posts by marionakaarena »

Posted on April 22, 2016, in Reviews. Bookmark the permalink. Leave a comment.