← Atlus to Localize Caligula for the West
Where is Our Grand Kingdom Review? →

Thank you Sukeban Games for the review code.

VA-11 HALL-A takes place in the year 207X in the dystopian city known as Glitch City. In this city you’re born with nanomachines to make sure you’re following the corrupted government’s laws. You are nothing but a stressed out bartender named Jill that works at a bar in HALL-A coded VA-11 giving the bar its name: Valhalla.

In Valhalla, it’s you, your boss/bartender bouncer Dana (whom you mainly call just call Boss), your mysterious co-worker, Gillian, and of course all of your customers. The game’s gameplay loop is quite simple, before work you can buy something so that you won’t get distracted at work and/or you can read your local news via Augmented Eye or visit Danger/u/ an anonymous message board of sorts and see what’s being talked about. Once you’re done with all of that, it’s time for you to go to Valhalla. 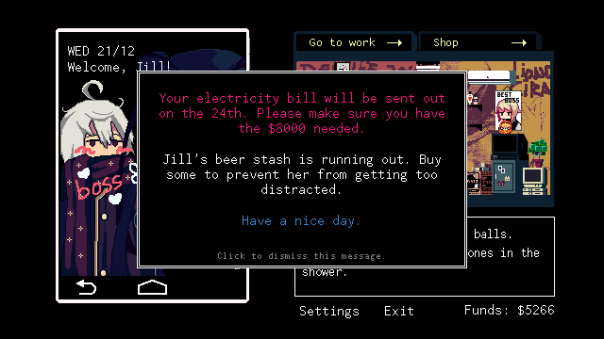 All of the magic happens in Valhalla. Before your shift begins you’re allowed to put together a playlist of 12 songs and my God is it hard to bring the list of over 50 amazing songs down to just 12. Even when the tracklist is made, I’d change it up when I get the chance. Seriously though, there would be times I’d leave the game running just to continue to listen to its music while I do other things. 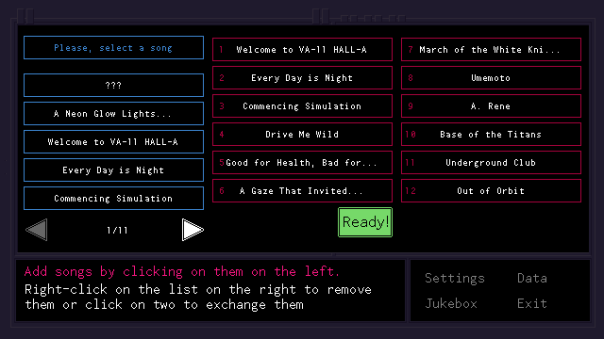 To get back on track, once the music has been selected it’s time for the bar-tending to begin. This is where all of the ‘gameplay’ and 95% of the story will take place. The gameplay is very easy: someone asks you for a drink and the game tells you how to make it and all you have to do is follow the directions. Just know that if you let Jill go to work distracted, she won’t remember what the customer ordered and you can’t see previous dialogue when it’s time to make a drink. If the customer wants a “big” drink just double the ingredients. The game honestly has no fail state unless you’re trying to fail as a bartender on purpose. Or… if you can’t pay your bills on time. The story bit kicks in by how well you serve them. You see, for a game with no dialogue options, the customers dialogue will change depending on what you do. You can just change entire pieces of a conversation just by making someone a different drink. That said, it would be best if you didn’t give someone what they didn’t pay for unless you have a good reason, otherwise you’re risking a big mistake. When it’s time to close, the game breaks down how the day went. The better you do, the higher your commission rate and ultimately the more money you bring home. 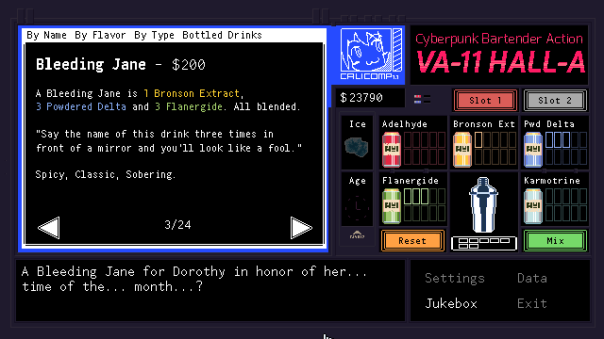 Valhalla’s writing is the game’s biggest charm and matches the game’s backdrop of being at a bar just perfectly. As mentioned before, your performance will make or break a conversation and a conversation is certainly something worth having. Between Donavan complaining about his interns to Dorthy – a Liliam (think android) talking about how she uses her model design as a plus when she’s out and about being an escort. This game has a weird comfort to it, and I just didn’t want the game to end. By the end, some were just asking for drinks I know they’d like or even saying they want “the usual”. It did feel like I was their bartender. The game has some references as well; ranging from blatantly obvious to so cleverly disguised because what’s even being referenced is obscure. 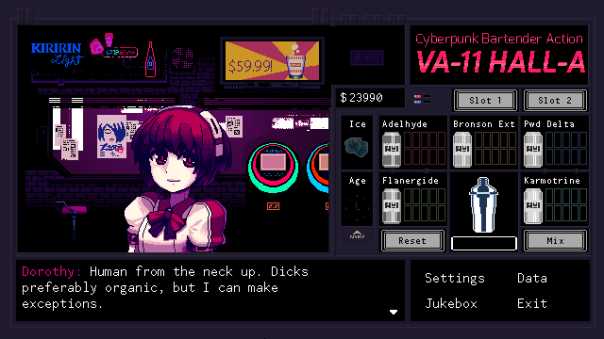 For a game that takes place in a dystopia it’s, all tell and don’t show. Considering the only backdrops are your room, the shop, and the bar all you really know about the world is what you read in the news via Augmented Eye, Danger/u/ posts and of course your customers that want to talk about current events. So while sure you can’t really see what’s going on, you can piece together what life is like pretty easily. The game saves no expense at making you believe it’s from the future, however, by being absolutely bizarre. Serving Liliams are one thing, but serving a talking dog that owns a company is far from the list of things I expected to see from this game. 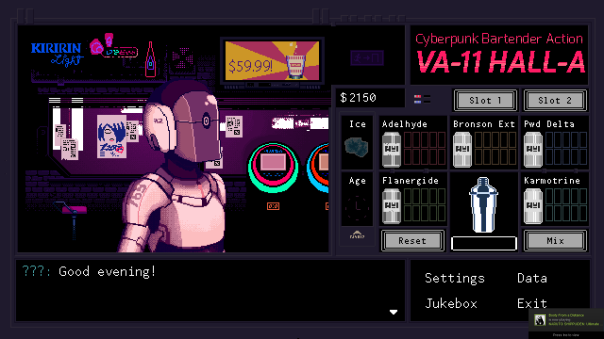 In the end, I don’t know what it is about this game, but I can’t find a negative. There’s nothing I dislike about the game as I absolutely loved every bit of it, but simultaneously, it feels like it’s missing something that would make it perfect. That aside, if you’re looking for a really good and simple narrative driven game, this is the one. This is nothing but 20 hours of pure comfiness and bliss.

← Atlus to Localize Caligula for the West
Where is Our Grand Kingdom Review? →