Yomawari: Night Alone Review – You Are (Not) Alone

Thank You NISA for Providing a Review Copy

It’s October meaning it’s time for the Halloween craze to begin again. As such, it would be appropriate to look into the horror genre which brings us to Yomawari: Night Alone. You play as a little girl who takes her dog, Poro out for a walk. On the way back home, Poro unfortunately gets away from you. Leave it to your big sister of course to go out and look for Poro for you. Hours pass by and for some reason neither Poro nor your sister has returned home… Did something happen to them? Are they okay? With these thoughts in mind, you yourself decide to out and look for them.

Yomawari is a simple adventure game. The goal is to find Poro as well as your older sister. What starts off as a simple task quickly goes wrong. The town is now filled with all sorts of spirits out to get you. The only ‘weapon’ you have at your disposal are light sources just so you have the ability to see them. Your only means of escape is to hide behind a bush or behind a board or of course, pausing the game and choosing to just go home and start over again. Note that the game actually has a narrative structure so it’s not like going back home is a big deal.

While the goal of the game is to find your missing loved ones, it’s not the only thing to do. There are quite a few extra events around your new night life. At one instance you might come across some chickens that need to be put back into their coup, putting an eye into a Daruma that’s chasing you. Or even worse, pick up a phone call only to hear a ghost saying it’s right behind you ready to kill you.

The controls are pretty simple overall. You can walk, run, or tiptoe your away around town and hopefully avoid foes by doing so. When you run, your stamina bar will decrease. Be aware though after a certain point, your stamina bar will actually decrease faster, so it’s actually smaller than it looks. To make matters worse, when an enemy is nearby, it’ll decrease even faster, so be on the look out. That said, you don’t have to actually watch for them. The game gives you other cues that death is just around the corner. For instance when a spirit is nearby you’ll actually be able to hear your heartbeat, and the faster it gets the closer they are. With your flashlight you can also uncover hidden enemies that can only be seen via light sources. That’s not the only thing the flashlight is for either. Without it on, you can’t hide nor can you pick up items from off the ground.

As a horror game, the game relies on atmosphere to get the point across. While there are no NPCs to talk to, the town is very much “alive” as it’s filled with spirits everywhere you turn. Every time you turn around, it feels like something new is going to come out and get you. For instance, at one point I foolishly stepped over a sewer drain only for a hand to come from under it to grab me. Thankfully, coming across this doesn’t automatically mean game over… If you’re lucky. In my situation, of nowhere four spirits that only had one huge eye surrounded me. Said eyes turned into a mouth, and you can only guess what happened from there. Besides that, what adds to the atmosphere is the music, and mostly lack there-of. Most of the time it’s just crickets only for your heartbeat to go up-and-down depending on the current situation. There’s a lack of dialogue as well. Of course, when a little girl is by herself, there’s only much she can say when the only thing possibly on her mind is looking for Poro and her sister, but even then. The game uses environmental story telling to fill in the gaps however that shouldn’t be spoiled. 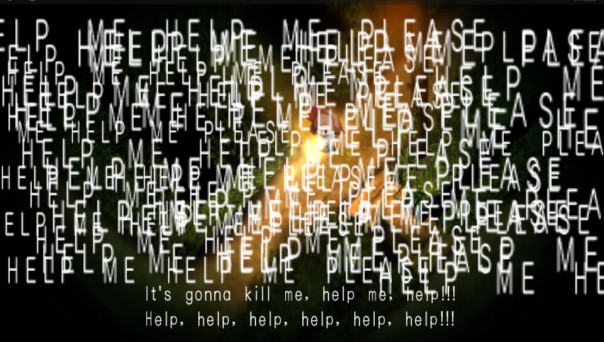 Interestingly enough, the game’s atmosphere isn’t the only thing that brings the horror to life either. It’s the game’s entire aesthetic. I’m sure all of the spirits here can be find inside of a Japanese Yokai textbook or online, but some of them look absolutely deranged. What look like are supposed to be children and adults are stick figures, there’s a spirit made up of just ears, and there are just some things that are just flat out undescribable. spirits like these work out super well due to the fact that the main character is just a child walking out alone in the middle of the night no less. Said child is just a simple 3D model as well whereas everything else is incredibly detailed. Speaking of which, the game even goes the extra mile making the town map look like a child drew it. This goes for other things as well. When you pick up an item, it’s image in your scrapbook will look like a child drew it and it’s entry looks like a child’s handwriting as well. 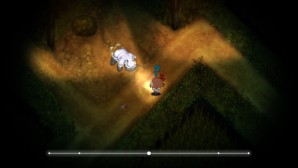 If there’s one thing that needs to be absolutely addressed however are what the game calls “quicksaves”. In the game there are Jizou statues you visit. These statues allow you to “quicksave” as well as teleport to any other statue you’ve come across. The problem is that the “quicksaves” aren’t the standard quicksaves as most games use them. These are actually just checkpoints. This is something the game doesn’t tell you and I had to find out the hard way when I turned off the game only to see that nothing saved at all when I came back to it. You see, when you quicksave at a statue and die you will respawn at said statue instead of at home which is fine and dandy. But, the problem is that the game calls them quicksaves which in all retrospect they aren’t, they’re checkpoints which will be confusing to most players.

At the end of the day, believe it not this game goes much further than looking for your dog and sister. Ultimately it’s a coming of age story about coming to terms with one’s actions and understanding life and death. Between that and the game’s atmosphere and aesthetics, the game doesn’t look like much, but it certainly brings a lot to the table. Outside of the whole “quicksaves are just checkpoints” bit, the game barely has any faults that could be recalled.