Berserk and The Band of the Hawk Review – Steel and Sacrifice

*The PS4 Pro Version was used to review this game

A review copy was provided by the publisher for this review.

The cleverly titled “Berserk and The Band of the Hawk” is the latest entry in Koei Tecmo’s series of anime themed “Dynasty Warriors” spin-offs. These games usually take the trademarked aesthetic and atmospheric tones found in each respective series and match that with a never ending amount of soldiers to carve your way through as your favorite anime protagonist. Does this game end up being a good Dynasty Warriors game? Does it end up being a good Berserk game? Lets take a look. 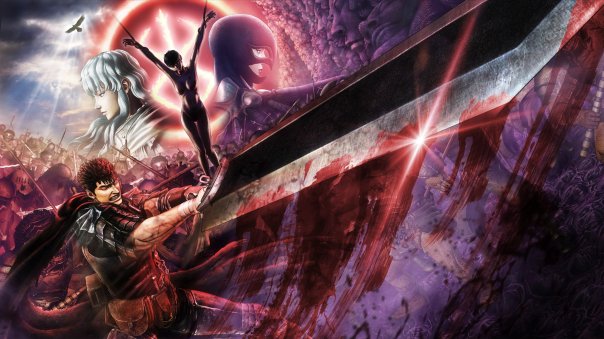 Story:
As an avid fan of the Berserk manga, I can safely say (for those worried you can’t play the game but are interested in the series,) you can put those fears to rest. This game serves as an amazing cliff-notes version of the manga story up to the end of the most recently completed arc. It skips a few smaller arcs/characters that don’t contribute to the overarcing story much but its nothing to worry about. The transitions in between battles shift the narrative storytelling style using various clips from the trilogy of Golden Age Berserk movies as well as very nicely animated in-game cutscenes to give you a condensed version of the acclaimed manga series. 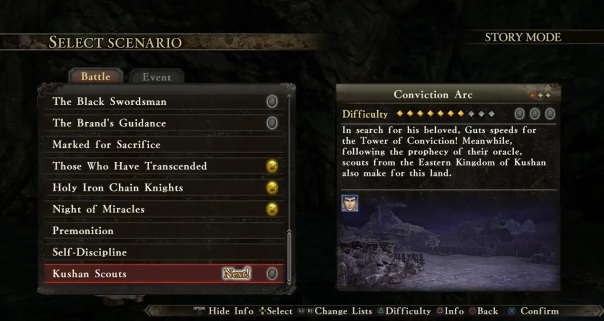 Graphics:
If you’ve ever seen any of Omega Force’s previous works, you’ll know Musou (“Dynasty Warriors” esque) games have never been the pinnacle of graphics technology during any console generation. Berserk is along the lines of last years “Attack on Titan,” drawing a very stylistic midpoint between realism and anime in terms of art style. Swinging your weapon into enemies will cut off individual limbs and create an absolute bloody mess which fits the series perfectly. While the color palette and visuals aren’t the prettiest graphically, the artstyle as well as the Menus/HUD design pull through for it in the end.

Audio/Music:
While the overall soundtrack isn’t anything amazing you will get a nice selection of tracks that fit the brooding and dark atmosphere of the Berserk universe. The weapon sounds are particularly fantastic as you hear individual bones cracking and snapping under the weight of Gut’s sword, or the vibrations of the earth moving while you summon golems as Scheirke. Its a nice moody departure from the traditional Dynasty Warriors soundtrack full of lovable yet sometimes monotonous hair metal.

–Sample of the Soundtrack–

Gameplay:
If you’ve never played a Musou game before let me give you the rundown: You’re dropped into a giant open map with tons of enemies to kill, and an objective or two to complete along the way. You get free reign to mix up any combo attacks, equipment or special attacks to slash and carve through the hordes of minions and make your way to the final boss of the stage. Sounds like a power trip, right? This game makes sure to supply you with enough optional mission objectives and collectibles to make sure you have a nice balance of combat flow with map management. Unfortunately, it can get a bit repetitive at times, as a lot of the more complex moves/equipment are locked to higher character levels; meaning it can take some time to get the ability to use more than 3 basic attack patterns. The boss fights are full of tension and take patience, but I still feel as though they take a bit too long. At times you will sit there for 15-20 minutes carving at what seems like a never ending health bar, trying to convince yourself you aren’t playing a Monster Hunter game.

Content:
Musou games are typically known for their hundreds of hours in content and while I was worried at first that this was going to be an issue, that worry was murdered like hundreds of soldiers in the game had been. The story mode is a solid 15-20 hours assuming you take a normal pace and do a few of the side conversations/events involving character interactions. The only other mode in the game besides Story and Free Mode (which just lets you replay story levels with any character) is the Endless Eclipse mode. I was concerned this mode would be a complete throwaway and would just end up being a generic horde mode to pad out game length. Thankfully, that wasn’t the case. This mode provides over 50 multi-leveled challenge quests that let you grind out your character all while showcasing variety  and each character’s individual strengths. I haven’t even begun to make progress in this mode even after putting a solid 10 hours into it, proving that if you’re looking for a timesink, you should look no further. The only major issue I have with this game besides the (non-detrimental) lack of online/splitscreen co-op is the character roster size. For a universe as big as Berserk, having less than 10 playable characters is absolutely ridiculous. A few of the characters have multiple forms and movesets, but this is no excuse for its small size. It just shows favoritism the developers have for some of the characters over others which never bodes well with fans, myself included.

Overall:
Taking everything in to account, “Berserk and the Band of the Hawk” is a decent Dynasty Warriors spinoff and an excellent Berserk game the fans have been eagerly awaiting. There are a few nitpicks as well as some weird design choices that might hold some people back from enjoying the game to its fullest; but, if you can enjoy an extreme power trip with memorable characters and a shocking story, this is one game definitely worth checking out. 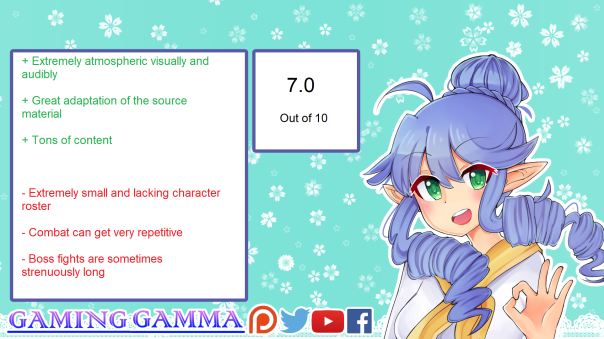 Lover of over the top fights and guilty binge watcher. Ask about me about my favorite Kamen Rider Series and we'll immediately hit it off.
View all posts by fofo808 »

Posted on February 27, 2017, in Reviews. Bookmark the permalink. Leave a comment.