God Wars: Future Past Review – A Diamond in the Rough

Thank you NISA for providing a review copy for this game.

It’s been quite a while since Kadokawa’s last strategy game, Natural Doctrine. It wasn’t received well due to its relentless and unforgiving difficulty if you made even a single mistake. In 2014, Kadokawa Games announced that they would try again, and in 2015 they officially announced “God Wars: Future Past.” Instead of the more Tactical side of the genre, they’ve opted for the more pure Strategy side of it. 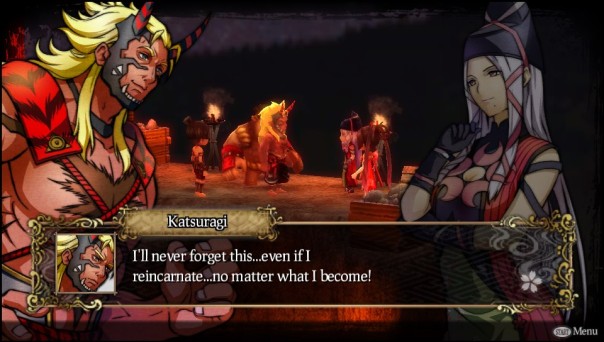 God Wars: Future Past for the Playstation 4 and Playstation Vita is more of the typical Strategy Role Playing Game variety like Disgaea or Fire Emblem. The game revolves around three nations: Fuji, Izumo, and Hyuga; together, they make up the land of Mizuho – the land where over 8 million Gods live. The problem rises from the fact that as time has gone on, humans have become more dependent upon themselves and their new-found technologies. Due to this, humans have been relying less and less on the Gods, and this has angered them. Before all Hell breaks loose, the queen of Fuji, Tsukiyomi, sacrifices one of her daughters to them as means to appease them. Thirteen years have passed since then and Tsukiyomi has gone missing. Meanwhile her third daughter, Kaguya, has been planned to be the next sacrifice just in case. This is where you, Kaguya’s childhood friend, Kintaro comes in and steals her away. The two of them go off in search of Tsukiyomi to figure out what happened to the once warm and loving mother.

The game has its story arcs split off into chapters and within those sub-chapters are episodes. These episodes are progressed through pretty quickly. Usually it involves a battle and then a resolution from it; sometimes not. On the world map there will always be a marker to your next destination, as well as a marker for shops and shrines. At a shrine, you can do requests (essentially, free battles) on maps you’ve already played on. If you do a certain amount of them, you get access to a special harder mission compared to the rest. Note that other than rare chests, all of the other chests will come back, so it can easily be used as a way to grind out a few things if need be. You can also give the shrine money. By doing this, you’ll temporarily have boosted stats. If you keep giving the shrine money it’ll level up meaning you’ll get more stat boosts as well as stronger stat boosts.

Potentially on your way to the next story destination, you’ll be stopped for a battle. These aren’t random or anything, but something to keep in mind if you’re low on items. Battles are of your standard SRPG fare. Everything is grid-based and units have a certain amount of movement in said grids. Attack damage and accuracy depends all on height advantage/disadvantage and positioning from the opposing enemy. What makes this one different however is that you actually don’t start off with MP at all. You have to wait for it to build up. So the stronger your spells, the longer you’ll have to wait before you can use them. There are even more powerful secret skills in the game as well that will unlock as you progress the story. 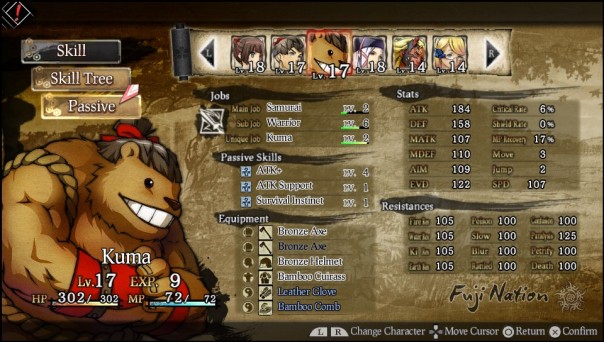 Truth be told, I’m infatuated with this AI. It’s not super relentless and capitalizing on what would be small mistakes like in Nocturnal Doctrine, but every battle seems to be smartly played. For instance, I had an opponent next to me; at the start of his turn, he used a move to prevent me from moving and at the end of his turn he made sure to move away from me so I wouldn’t be able to hit him back. What makes it even better though, is that even though this wasn’t a mage or anything but a melee unit and on his following turns he’d just throw rocks at me so I can take damage while he’d stay safe. And while that was an interesting ordeal, fact of the matter is, the enemy has no problem buffing themselves up while giving you a status ailment or targeting the weakest person or even retreating from a fight to heal up. While death isn’t permanent in this game, the loss of a unit or normal and especially hard can/will cause a loss in the outcome if you aren’t careful enough.

While the battles themselves are of a standard affair, how the game handles leveling is something of a different affair. Everyone can partake in 3 jobs; a main job, a sub job, and a unique job – a job that only applies to that character. In total every character has quite a bit going on at once. In battle not only do characters receive experience points, but they receive job points as well. With enough experience points, you level up; the same also applies to job points, although those are special. You see, when you gain said job points it’s split between your main job, side job, and unique job, in that order. So Main gets the most, Side gets an amount and Unique gets the least. And what makes these points so special is that the amount they get for that job is cumulative. This is due to the fact that characters don’t gain skills from leveling up. They gain skills on spending job points in their respective skill trees. These skills typically don’t have one level to them, so you can keep spending points on them to make them become stronger and stronger. Note that the stronger you make it, the more MP it will cost which, again, is something that needs to be managed on the battlefield. You might also have to level up a certain skill (or skills in some cases) to gain access to a new one. Passive skills can be used when you’re not of that class or even sub-class, whereas others aren’t of that case; this is not the same with every other skill you unlock. 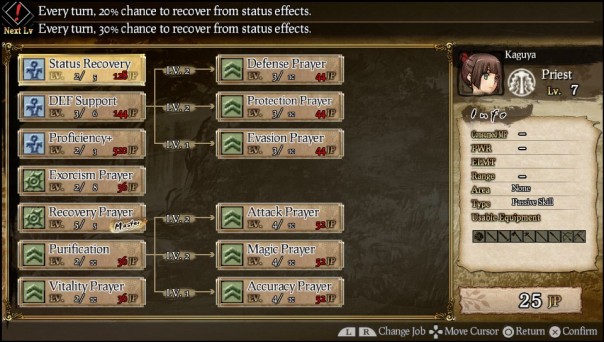 Everything about the core of the game is expertly crafted. This includes Mino Taro’s designs for the God’s. The character designs can be pretty hit or miss at times, but overall the game is very pretty looking on Vita. Unfortunately, the music isn’t as decidedly eastern as I’d like be. Don’t get me wrong, it totally is. But there are just some tracts that kind of detract from the exerpience because Rock would suddenly start to play or even a little Metal. Granted, the music still gets the job done, but when everything about the game is incredibly Japanese, the music just comes off as out of place at times. And it isn’t the game’s music that is the biggest turn off either. There’s a weird audio mixing issue where whenever a track would play, the music would be so loud that characters would sound like they’re mumbling if you aren’t wearing headphones, and even then there are times where they’re just hard to hear. I haven’t tested to see if this was just a problem on the English track because not to long after I started the game with Japanese audio, I was greeted by an animated cutscene with no subtitles so I turned it back to English immediately. While I do enjoy the fact that the game is fully voiced, the story segments don’t have an auto-play function like just about every other game does. Meaning the only things I can do during story scenes are either skipping it entirely or pressing X after every line instead of having it playback naturally.

If those rough edges were fixed, then the game would be held in a higher regard. But for what is there, coming from the fundamentally flawed Natural Doctrine comes the fundamentally solid God Wars. Due to the fact that the game has been delayed several times to fix bugs and even include user feedback, it shows that Kadokawa was truly dedicated to making the battles the best they could possibly be and it sure does show. If there is ever a sequel for God Wars, I’ll be right there waiting. 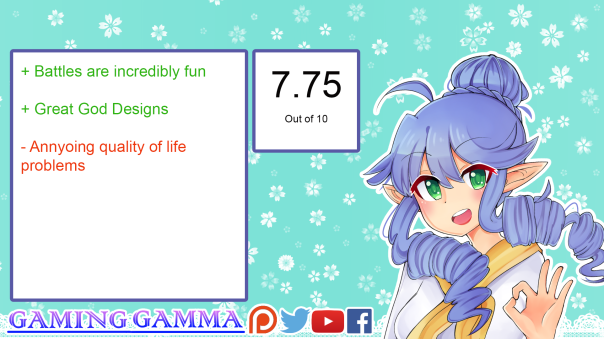