Ys VIII: Lacrimosa of Dana Review – The Legend of Dana: Crystals of Time

It’s been 4 years since the last Ys game, Memories on Celceta. A fun time, with albeit some story problems here and there. YS VIII: Lacrimosa of Dana, doesn’t feel more of the same, but it does bring about some of the same issues I’ve had with Celceta.

Here in Lacrimosa of Dana, we play as Adol Christin yet again embarking on another adventure. If you’re a new comer to the franchise, don’t panic – each game is a separate tale for our adventurer here. This time he’s temporarily a sailor meant to guard some passengers as they make their way to the mainland. However, problems quickly strike when the boat gets too close to a mysterious island. The boat gets attacked by a giant monster leaving you and the passengers shipwrecked on the island. Initially, you start off alone, but quickly find others. Together you set up Castaway Village in this deserted island and explore it with the main goal in mind to find as many surviving passengers as possible and find a way to escape.

About halfway through the game, finding the passengers gets put on the back-burner as exploring the island and its secrets becomes more and more important. That’s not to say that these people aren’t important, however. You’ll naturally come across some people and others you’ll actually have to go out of your way to find yourself. It’s best to find as many people as possible as someone contributes something to the village in one way or another and even helping you in some instances. 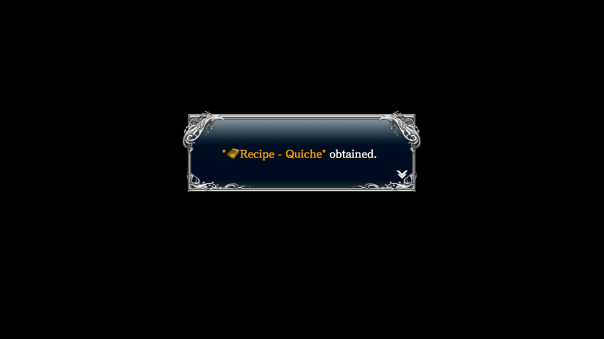 Outside of establishing the home base that will be Castaway Village, your job as an adventurer is to chart the island from top to bottom. That’s right, the map system from Memories of Celceta is back and the more you explore the island the greater your rewards will be. The island itself is divided into five segments.

The first being the small hub area of Castaway Village. Due to the fact that there is no money on this island, you’ll be bartering with the merchant, blacksmith, and tailor to get new items, weapons, and accessories. Here you’ll also find a place for sidequests as well as the place to improve your relationship with your teammates and other fellow castaways. 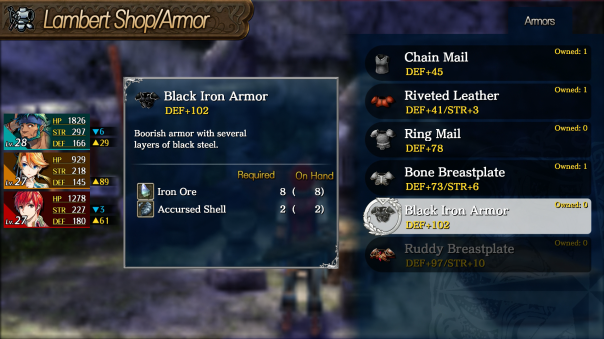 The second and third are the game’s overall world and dungeons. These two parts play out pretty much the same. Throughout the game, you’ll be traveling through swamps, beaches and shorelines, crossing mountains, and jungles. The biggest difference is that in dungeons, you can’t auto recover HP from standing still, so be aware of your surroundings as well as being well equipped when going inside of a dungeon. This applies even at night as at night, fast traveling is not an option, and you can’t auto recover HP either. Doesn’t matter if you’re inside a dungeon or not. Also in some dungeons, you’ll find an item that’ll help you traverse it as well as the outside world to help you get to new places. 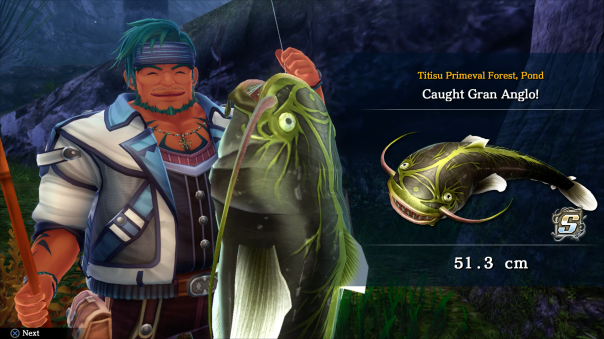 The fourth segment deals with secret past of the island itself. During the game, Adol will be having dreams of a girl named Dana – an important figurehead to the people that previously lived on the island. She herself is aware of Adol’s existence as she has premonitions of the future, so during your time as her, you’ll be using her help to get to a location that Adol’s group currently can’t get through using normal means.

The fifth segment are repression missions. These missions are essentially a very small horde-mode-esque as you’re defending a small point on the map from wave after wave of enemies. Repression missions happen fairly often throughout the story and while exploring a dungeon. Having them triggered by a story event is one thing, but the longer you wait while out and about in a dungeon, the stronger the enemies will become. There is a variant of this called suppression missions In these missions, again you are in a small area, but instead of defending it, you are attacking the enemies as well as their eggs. That is over once all enemies, as well as the boss of the area, has been defeated.

When doing these missions it’s pretty important to have a high approval with your fellow castaways. This can be done by doing missions for them and giving them gifts. The result of this will be that they will help you out by either providing buffs like infinite SP increased strength. Some also attack every enemy in the field while others debuff enemies by providing status ailments in some of their attacks.

For all intents and purposes, YsVIII is a frantically fast hack and slash game. Outside of playing as Dana, there aren’t any real puzzle solving segments in the game. That said, that’s fine. With how fast the action is, slowing it down almost feels like a crime. There’s only one general attack button sure, but each party member has access to four special attack moves that uses SP, as well as a very powerful extra skill which uses the extra gauge. There’s also a dodge button and a guard button. Should you dodge at the right time, time will slow down for a moment, making you invulnerable to moves and will allow you to get some extra hits in. While you don’t actually guard with the guard button (it actually serves as the way to access your special attacks) pressing this button at the right time, will ensure all of your moves are critical hits for a brief period. So perfect guard and perfect dodge at the same time and you’ll certainly pull off some devastating attacks. 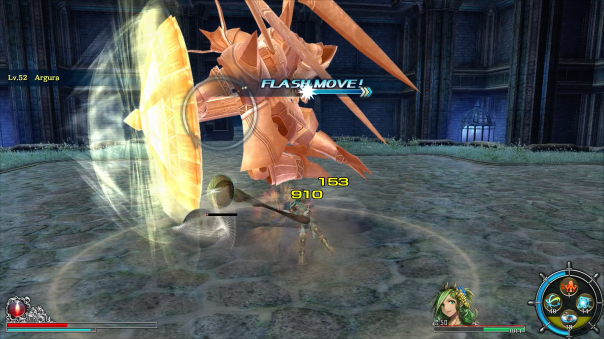 Graphically speaking, it’s pretty obvious that this game was made with the Vita in mind as there are loading zones everywhere. Some areas small, others quite large, but the fact remains that everything is zoned out. Thankfully there are also fast travel points all over the game, and traversing from place to place isn’t all that time–consuming. Truthfully, it being mainly on Vita isn’t so bad as the PS4 can take all of the advantages from that with the game being 1080p 60fps. So while sure graphically it’s not pulling any punches, but everything does look pretty clean and overall pretty smooth in motion. Although there is this odd hitch where there are just some spots in Castaway Village where the game will notably lag quite a bit. Other than that, the game runs without a hitch in terms of frame rate even when I was surrounded by 20+ enemies and hit them all at once.

In terms of music, Falcom Sound Team JDK doesn’t disappoint. While I wouldn’t say this is one of the best soundtracks to release all year (Nier: Automata and Persona 5 say hello), this game I would say certainly has tracks that can go toe-to-toe with them such as Sunshine Coastline, A-Z, and Deadly Premonition. 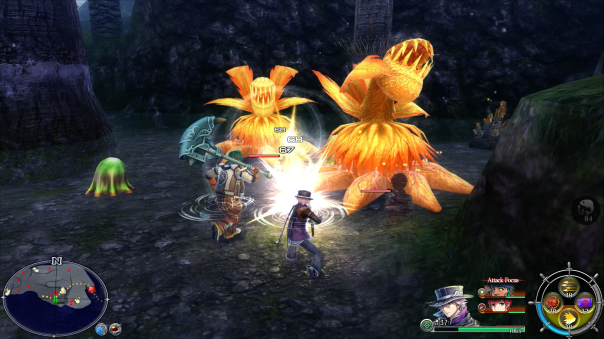 To back track for a bit, do you remember when I said it would be a crime to have the game slow down from all of the fast gameplay? Well, sadly the game does this. Especially in the opening hours. Sadly it wasn’t in the “here are all of the tutorials” kind of way either. It was just bad story writing. Without going into too much detail, there comes a point where something is injuring the villagers and you have to figure out what it is. The progression of the actual story comes to a screeching halt for seemingly no reason as it’s dealt with very quickly but took about an hour or two for seemingly no reason at all. Granted, this isn’t the only time this happens either. But, at that point, I was already way more invested in the story than I was at the beginning where the game was constantly chaining me down. 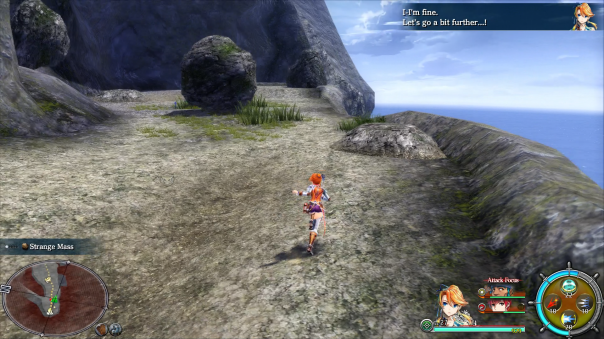 Outside of the story slowing me down, while the actual game wasn’t suffering from frame rate problems, my copy of the game has certainly had a few weird bugs going on with it. For instance, there were a few times where I was playing with the English dub option turned on, but a character said a line in Japanese. There was another time where a character said the same line twice in a row broke the illusion of the scene. Of course, these were small occurrences and only happened once or twice in the game so it didn’t bother me all that much. However, I highly recommend going into the options menu and changing the control scheme and turn off the button that acts as a hot key to the journal entries.

I’ve contacted NISA about this already so hopefully this gets fixed soon, but pressing a button to go straight to the journal has soft locked my game more frequently than I would like. Thankfully, going to it manually from the options button doesn’t cause any such issues. Fact of the matter is, if this game didn’t autosave as frequently as it did, it would come off extremely worse.

If there’s anything to give this game praise this game for outside of the music, it’s that its sense of adventure is just incredible. The mapping systems makes me want to explore every nook and cranny I possibly could and get every chest I possibly could. When I finished the game, I had explored 99.02% of the map or something crazy like that while only missing two treasure chests. It makes me want to find out whatever speck of the map I missed and cover it up along with opening those last few chests.

If you’re a long term Ys fan, sure the story content may not be to your liking, but as it’s own thing, once the game lets you go out and explore, it’s one of the best in terms of gameplay. Although, I do sincerely hope they make the story either less of a focus in the next game or at the very least make the writing, in the beginning, to not feel so sloppy. Regardless, if you need an amazing hack and slash RPG this holiday, this is surely the one to pick up.