Thank you to XSEED for providing the game for reviewing purposes.

While Summer is over, you can keep it going forever in Senran Kagura Peach Beach Splash. The titular series takes us to the pool this time around for some crazy ninja water gun fights. But wait, melee attacks and ninja arts are more or less banned, so how does this play out? By being a third person shooter of course. That said, we’re going into complete uncharted territory here since the franchise is known for being a brawler/musou-esque gameplay design depending on which game it is. Not only that, but this game is also the series’s 5th year anniversary game go figure. 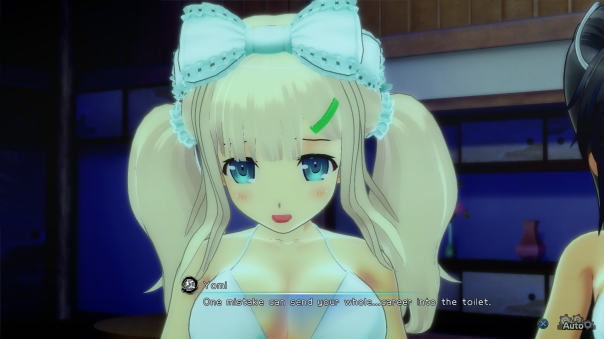 As far as stories go, this honestly is the worst by far. Sure with a series like this the bar was never necessarily that high, but the numbered entries had something going for them and the Versus games had the cast size to back them up. PBS has an even bigger cast sure, but it doesn’t do anything with it. It almost feels lazy in a way. I’d be more lenient if this was a spin-off title, but it’s not – it’s a main entry. The story this title tells is that it’s a hot day and the girls get invited to Peach Beach Splash. A water sporting event for ninjas. In this case, a water gun fight tournament. The winner gets their wish granted. Of course everything is not as it seems as there is something shady lurking in the shadows.

In terms of multiplayer, there’s a few flavors to choose from: a survival mode in which you take on enemies waves at a time. A self explanatory Team Battle mode. A capture the point mode called Queen of the Hills in which you’re battling over 3 platforms and whoever defends them the longest wins. There’s a Squirmy Incident Tournament mode in which after you down an enemy, you preform a finisher that takes off their clothing. And last but not least, but not necessarily saving best for last – Capture the Bra.

Gameplay wise we’ve gone from very frantic melee combat to very frantic third person shooter combat. This right here is the biggest thorn on the game’s side however. The actual gameplay itself has some interesting ideas on paper but aren’t executed all that well. For starters, the game is pretty fast paced which is nice. You have a universal tank of water, and you can use it to shoot your bullets, use it as a method to jump higher, or even use it to increase your dash length. Each character also has a deck of cards to use throughout matches that range from doing damage to opponents, creating shields, debuffs, or even status ailments.

While the ideas are neat, how they’re executed isn’t necessarily. For one: with some weapons, you’ll be spending more time reloading than actually shooting bullets. Granted this can be fixed by leveling up yourself as well as your weapon, but that’s something that’ll be gone into depth later. Another point to be brought up is that, you – the player have 3 lives in matches. When your HP goes below half, you’ll gain temporary invincibility which is cool. The problem is that your allies only have one life and you are the only one that can bring them back to life. So on harder difficulties it certainly feels like you’re playing babysitter more than having an actual match because the AI isn’t good. Some bosses – even on normal feel impossible because of how easy it is just overwhelm you.

Sure like in every game, leveling up is a surefire way for the game to become easier, but the game can’t even do that right. This time around instead of gaining experience like you normally would after you beat a level, you open a pack of cards. These cards have a rarity value assigned to them. If you open a pack and you get a card you don’t have, great, you keep it. If you don’t, it becomes experience points. Naturally the rarity of the card dictates how much experience it will give as well. Thankfully, leveling up cards are a one-size-fits all approach in which if you level up a card in one person’s deck, it’s leveled up in everyone’s deck. The crux of the matter is though is that there are over 800 different cards to find and level up and then you have to level up the girls independently which sort of leaves you stuck in what you want to level up. Yourself for more HP? Your weapons (and even then which one) for higher attack, or the cards you’re bringing into battle so they have better effects? There’s also the fact that you don’t necessarily gain a lot of experience points either. So you will have to spend them wisely. 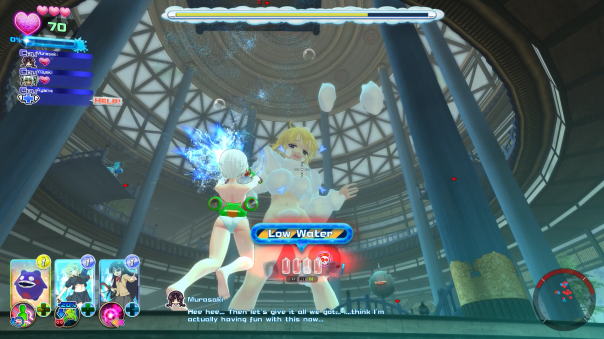 Truth be told, on a graphical level, it looks pretty similar to Estival Versus on PS4. There is a model viewer that isn’t just the usual dressing room/diorama shenanigans though so if you want to look at how cool your watergun is by all meas, do so. Music is serviceable. It’s not terrible, but it’s nothing special. Framerate is an interesting story though. When there are only mob enemies, everything is fine and dandy. But once an actual enemy team gets on the field and once everyone starts using their cards, the gameplay noticeably tanks.

As much as I find Senran Kagura to be my favorite guilty pleasure series, this one I found myself actively disliking it from the get-go. The gameplay design is certainly fun when you get the hang of it, but everything around it is just badly designed and just makes it not fun to play. As someone that’s for developers wanting to branch out and do other things, this is one of the few times where sticking to the status qua might have been a good idea.

Posted on September 27, 2017, in Reviews. Bookmark the permalink. Leave a comment.