Danganronpa: Another Episode is the third game in the Danganronpa franchise. It takes place between the original Trigger Happy Havoc and its sequel, Goodbye Despair. Now, don’t be fooled by the Danganronpa name. This game is only Danganronpa in terms of its writing and namesake. There is no visual novel to be found here or case solving. This game goes on a completely different route as it’s actually an action game with a lot of puzzle solving.

The story here is very simple. The main character is Komaru Naegi, a very generic normal and not too bright high school girl. She’s been imprisoned for about a year and a half (meaning this game takes place about half a year after the first game chronologically) in a room in Towa City. Suddenly, a Monokuma attacks her, setting us off along the storyline. The Future Foundation (an organization dedicated to bringing hope to the despair filled) comes in and saves her from doom and gives her a microphone that can send radio waves to destroy Monokuma. Unfortunately for Komaru, Towa City has just succumbed to The Tragedy – a worldwide epidemic where the world basically collapsed upon itself- in the form of children wanting to take over the world. Towa City, one of the last safe havens, has now fallen. Fallen to children that call themselves the “Warriors of Hope”, and want to make a paradise where only kids exist and Demons (adults) die. As such, Komaru has been re-captured, tagged, and then let go by the children controlling the newly destroyed city saying they’re going to kill her what feels like just shortly after she gets out of her cell. The name of the game is: escape the city. Trust me, you want to escape this city. 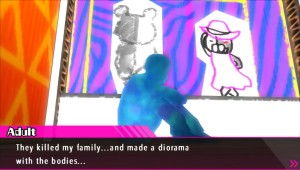 They say the world can change a lot in a day. Well, those people were right.

The setting of Another Episode is far different than the other two. Everywhere you turn, there is a dead body somewhere. It’s really creepy. Whether they’re hung up, piled on, or even just lying around, there is a dead body. What makes this so bad is that sometimes you’ll see children playing with these bodies and it just seems so cruel and weird. At the same time though, if it’s like that here, just imagining how the other places in the world are is entirely off-putting. It really feels as if the world has truly ended in this town. It’s just so despair-inducing that I can’t really put it into words. All I can say is that it would be extremely hard to stay sane in a place like this.

This place is just very disturbing. Jumping up and down on a pile of dead bodies? Really?

What ultimately sets this game apart from the other two Danganronpa games is the fact that this is an action game. Unfortunately, a lot of that action gets interrupted when you pick up some collectible items combined with the fact that this game is riddled with cut-scenes and dialogue. Now, don’t get me wrong, I love Danganronpa, but as an action game it’s a really flawed set-up. To make a slow paced game go even slower just to set up the next plot point feels about as odd as their mouths not having lips in the CG scenes. Spike-Chunsoft could always incorporate the dialogue into gameplay time, instead they chose not to and left it for unimportant talk segments and commentary on a few things. Now, I’m not saying they should get rid of all of the cut-scenes or anything, it’s just that it would be best if they were farther apart. It’s just that for an action game, it’s really stop and go slow. There is a “go fast” approach in combat, but its use is very limited.

As for the gameplay itself, you’re mostly going to be playing as Komaru. As mentioned beforehand, Komaru is given a microphone to defend herself. Don’t worry, she won’t be yelling into it to fight Monokuma or anything; the microphone is actually a gun. What this microphone shoots are radio waves that have the power to disrupt technology. As with any gun, it has bullets, and this gun comes with multiple kinds. For example, there are Break Bullets, Move Bullets, and Dance Bullets. Break Bullets are the standard bullets of choice as they’re the basic way of dealing damage to Monokuma. Move Bullets don’t affect Monokuma at all as they’re meant for inanimate objects such as switches and cars. The Dance Bullets work pretty much as they sound, you shoot a Monokuma with it and they dance. Contrary to how it sounds, these bullets are actually really useful. Once a Monokuma starts dancing others will be drawn to it, and, if done right, you can take care of all of them right then and there or sneak by them if you want to. For example, let’s say you shoot a dance bullet at a Monokuma in front of a car, other Monokuma will ignore you and see what’s going on with the Monokuma you just shot. You can then shoot a move bullet to the car and it will run over all of those Monokuma at once. I will say, however, that you must be wise with how you take care of yourself. Even though you start off with a lot of bullets, by the end of the game you’ll be looking for scraps as this game eventually stops giving you handouts. There are places to replenish bullets, but not only can you only use it once, it’s essentially a slot machine and what comes out of it is random. That said, you can’t buy bullets either, so once you run out, you’re on the run until you’re at an area where bullets are necessary or at a boss battle (because then you’ll get bullets when you get low). On the plus side, you can choose to use your partner character you find early on if you wish. This character plays completely differently than Komaru as this character uses melee attacks and doesn’t need bullets at all. This character is also invincible and can be accessed at any time. Naturally, the downside to this is that there is a gauge that goes down as long as you use the character and the only way to fill up the gauge is to use batteries which are even rarer than bullets.

Boss battles aren’t the best. The game makes sure you see the boss and yourself at the same time meaning trying to grab ammo is a pain.

Graphically, this game is a really nice treat on the eyes. Native resolution and AA on a Vita game feel like a dime a dozen. Everything is just so sharp, clear and crisp. It’s just stunning. The downside to it all, however, is that these looks come with a hefty price. You CAN’T do anything else when playing this game. Can’t look at your trophies, screenshots, surf the web, etc. Once you’re in this game, you’re in this game until you find a save point, which I may add, feel very far apart from each other. You can’t make a save until you’re an hour into the game, for instance. Thank goodness for the Vita’s great sleep mode or I would’ve been in trouble a few times as this game is also eats away at your battery life. 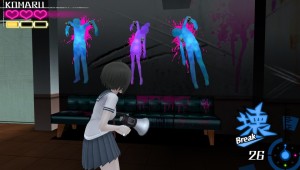 Most of the tunes in this game should be very familiar as some songs are remixes of previous songs from Danganronpa games. These go hand in hand with some completely new tracks that go well with this despair filled environment. As far as the voice work goes, it was very nice. I honestly didn’t expect it to be almost fully voiced as the previous Danganronpa games are only partially voiced.

All in all, this game is a wonderful Danganronpa game that shouldn’t be ignored. It’s a title that had a lot of care taken and put into it. Aside from the problem with how often you can save, even on the hardest mode the game is pretty simple and easy to get through. If you’re unfamiliar with action games, you’ll be fine as there are a lot of “find a way to kill the enemy in one combo in this room” type puzzles. However, if you like action games, you might be disappointed here as it’s a splendid DanganRonpa game, but a very mediocre action game. If you’re on the fence regarding this game and you’re a fan of this series, don’t be. Pick this up. This is much more than “another episode”.

+/- Game is way too easy even on the hardest difficulty

-Not really feeling the gunplay all that much

-Not that much action between talking segments

-In boss battles, you’re fighting the boss as well as the camera