← A Demo for The Legend of Legacy Goes Live on September 22nd!
Gravity Rush Remastered and Gravity Rush 2 Announced for PS4 [UPDATE] → 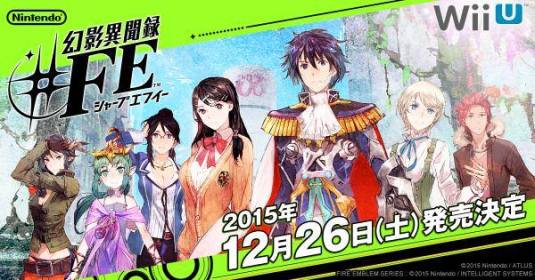 Shin Megami Tensei X Fire Emblem (or Genei Ibun Roku #FE) will launch on December 26th, 2015 in Japan. Currently no word on when this game will be hitting the United States and Europe, but we do know at least that it will be coming out next year.

People who get the first print editions of the game in Japan will receive DLC costumes based off previous Atlus games. This includes Rei from Persona Q Shadow of the Labyrinth, Devil Survivor 2’s protagonist, Walter from Shin Megami Tensei IV and the Princess from Etrian Odyssey III.

Nintendo is looking like they are trying to make a splash with this game in Japan this December. It will be interesting to see how this Nintendo x Atlus cross over will fare up against Atlus’s own Persona 5 that is looking to launch around the same time this year in Japan.

To see all this stuff for yourself take a look here:

← A Demo for The Legend of Legacy Goes Live on September 22nd!
Gravity Rush Remastered and Gravity Rush 2 Announced for PS4 [UPDATE] →