END_OF_DOCUMENT_TOKEN_TO_BE_REPLACED

It seems like Majima is giving us a bit of a surprise as to when we can expect Yakuza Kiwami on Steam. On the updated Steam page, this gif was posted

Didn’t see it? Well heres a little hint on one of the frames. 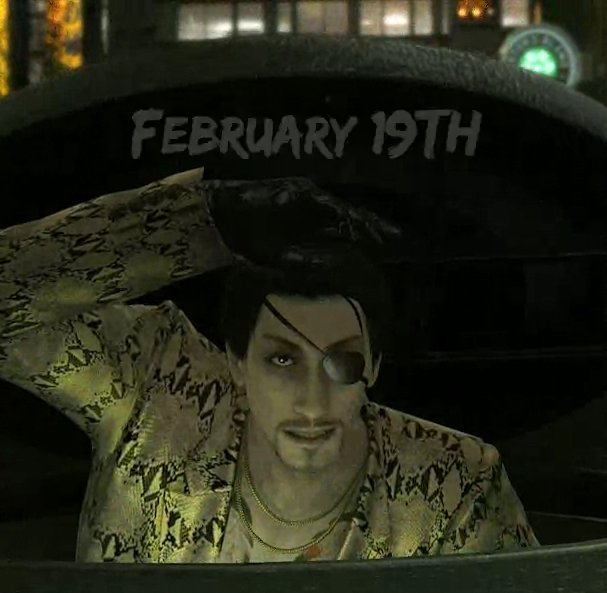 At the very least we are getting some news on Yakuza Kiwami for PC soon, but it is a safe bet that it will be releasing on February 19th. As more news comes out about this version of the game we will be sure to report on it here!  In the meantime check out our review of the PS4 release of Yakuza Kiwami here. It takes more than one to escape this fabricated reality! Recruit your fellow students to execute unique combo attacks in The Caligula Effect: Overdose, coming to Nintendo Switch™, PlayStation®4, and Steam® March 12, 2019 in North America, March 15 in Europe, and March 22 in Australia and New Zealand!

You can still pre-order the Limited Edition of this game on NISA’s website! Although for those of you who want this game in English now, the South East Asian release of this game is currently out now with a full English sub, however that is only for the PS4 version. Switch owners and PC users will have to wait until the official release to get their hands on this game.

END_OF_DOCUMENT_TOKEN_TO_BE_REPLACED

Today Idea Factory International and Ghostlight have announced that Fairy Fencer Advent Dark Force will be making its way to the Nintendo Switch eShop later on this Fall!

Furies and Fencers! Rise above! Fairy Fencer F™: Advent Dark Force will be arriving to the Nintendo™ Switch digitally on the Nintendo™ eShop this Fall 2018! The European version will be released by Ghostlight. The game will be available for $39.99 and will also include all 25 DLC available in the original PlayStation®4 release!

In a land filled with power-imbued weapons known as Furies, the Fencers who wield them are locked in combat to collect as many Furies as possible. The unassuming hero, Fang, finds himself caught up in their struggle when he pulls a sword from a stone. With up to six characters on the battlefield, a revolving cast of party members, and a customizable world, join Fang and his band of Fencers in an epic battle to revive the Goddess or the Vile God!

Fairy Fencer Advent Dark Force is an enhanced version of Idea Factory’s PS3 title Fairy Fencer F with much more content and new routes to explore. This is one of my personal favorite JRPGs from Compile Heart so I am excited to see that this game will be heading to the Nintendo Switch!

Valkyria Chronicles is honestly one of my favorite IPs by SEGA. This tactical JRPG mixes my love of strategic gameplay, World War II and engrossing narratives to create a mix of game that I can not help but fall in love with. Finally after nearly eight years, western fans have a chance to delve into a Valkyria Chronicles game again. For those of you confused as to why isn’t this Valkyria Chronicles 3, Valkyria Chronicles 3 was a PSP exclusive that sadly was never officially localized for an English release. That said I am glad that the fourth entry has been able to make its way over.

END_OF_DOCUMENT_TOKEN_TO_BE_REPLACED

SEGA seems to be on a roll with the Yakuza series as of late. This year, western fans have been graced with Yakuza 6 the Song of Life, the series debut onto PC, and the Yakuza X Fist of the North Star crossover localization announcement. Now today, we take a look at the second entry in the “Kiwami” remakes of Yakuza games, Yakuza Kiwami 2. Just like Yakuza Kiwami, Kiwami 2 is a groundup remake of the original PS2 classic Yakuza 2, this time made in the Dragon Engine. How does this remake of the original Yakuza 2 hold up, and does this game paint an interesting picture of the future of the Yakuza series?