Thank You Aksys for Providing a Review Copy

Moco Moco Friends is a very interesting game. It comes off as a cutesy Pokémon-styled game where you are taking the role of Moco to go on a grand quest to become the Plushkin master.

This game was clearly designed to introduce a younger audience into the JRPG genre. With that, I believe the game does a good job, introducing JRPG mechanics in a way a younger person can understand. That being said, as a JRPG in and of itself, the game leaves a lot to be desired. However, it does me no good to leave it like that so I will explain where this game does well to bring a younger audience into a deep genre, and where I felt at times the game seemed rather flat.

The general idea of this game is that you take the role of the Plushkin master, Moco. Her job is to do requests for residents of the town and her teacher, and seal evil vortexes. 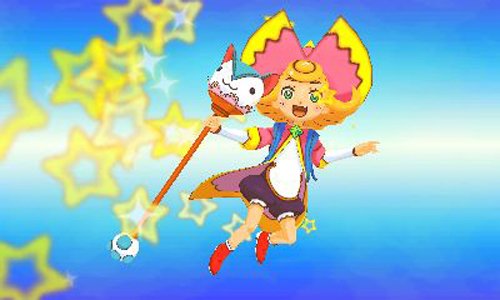 The main thing of the story is that someone is creating evil vortexes all around the different dungeons, these vortexes are causing Plushkins to become corrupt and evil. The quest sends Moco to find out what is behind all of this, and her own quest to be a grand Plushkin Master and earn herself the Stellar Medal. Overall the story was kind of bland. The game really consists nothing more than fetch quests in the game’s different dungeons and catching different plushkins.

While the story did have some charming moments, the overall presentation just felt mundane. However the simple story may help people who are new to the genre get into the game easier without having to go through mountains of backstory. The game is very quick to the point, and at times explains nothing outside of quick tutorial screens.

The next thing I would like to talk about is the game’s combat system. Once you enter into a contract with your Plushkin they will fight alongside of you in battle, with a max of three on the field at one time and one in reserve, each Plushkin has 4 moves with one being a basic attack and the three other ones being elemental base. The combat is pretty solid and simplistic to get a hold of. In the corner of the screen you have a magic meter that has a total of five orbs in it.

This would be this game’s equivalent of SP. Each special move that attacks one enemy uses one orb of SP. You regain SP at the end of every turn, and at the end of every turn Moco’s magic gauge fills up. Once it maxes out, Moco goes into a bit of a hyper mode and this allows you to use any special move you want for one turn without using any of the orbs. While on paper the idea of this is pretty good, the execution of it is a bit flawed, your meter progress will carry over from fight to fight, however, once it’s full Moco will activate it on her own, meaning you could be in a simple fight with a random plushkin and the meter goes off. 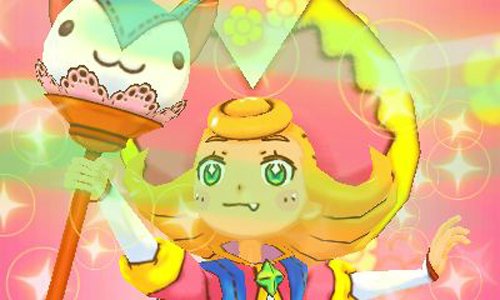 However she does go into this cute dance routine when you have full meter.

Which is sort of a waste of a meter. The ability to use it when the player felt like would have been good. Like I said, overall the game’s combat is quite simplistic, yet solid. To the more experienced player it doesn’t add much substance but to the beginner this could be just enough to get them on the right start to understanding turn based gameplay.

So I should touch on the subject of the dungeons that you get to explore. As far as I can tell, the dungeons are completely RNG, and are very simplistic in design.

You start off in these dungeons and you must find your way to the next floor. You will unlock more dungeons as you unlock different fetch quests, and each dungeon has their own type of items you only can get from there or different plushkins you can try to catch. Each dungeon will have their own theme that differs from the others, and the change in scenery is appreciated but it’s hard to think that they are all separate dungeons. Most of the time the dungeons go by the same formula, search the dungeon for the exit, fight the boss, get the fetch quest item, claim your reward. 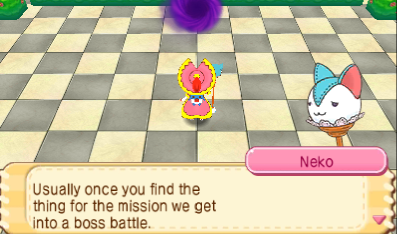 At least the game admits it.

It just came off as a bit too simplistic to me. If it wasn’t for the game’s crafting system, I don’t think I would have much of a reason to visit some dungeons more than just once.

The next thing about this game that is very interesting is its crafting system. While you are traversing the different dungeons you will encounter a lot of resource spots that you can use to farm resources from. You can also grow your own resources in the farming area of the town at the cost of having to wait in real time for them to grow. These resources can be used to make different items, or even craft new Plushkins. However, there is a downside to the game’s crafting system: you have no control over what you craft, it is random. 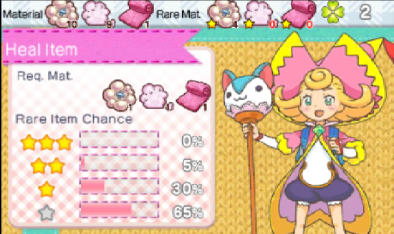 Granted, using higher quality materials will net you better items and more powerful Plushkin, but it is never guaranteed. However, I got a bit of a strange addiction going back and forth between dungeons and crafting trying to find the right combinations to get the right items. This is good for younger players who may not want to have to memorize what items make what, however, I feel like there should have been a way to be able to make specific things a bit easier with the crafting system.

This game also has a very addictive replay value. To do a lot of the crafting in this game you need gather materials, and the game actually rewards you for playing the game every day with a new set of materials, getting better and better the more consecutive days in a row you play the game. I feel like this is a great way to reward the player for always continuing their progress, and at the same time giving them materials they made need to make new items or Plushkins.

One of the final things I want to talk about in this game are the Plushkins, themselves. The Plushkins are exactly what they sound like: plush-like creatures. The job of a Plushkin Master is to tame them and use them to help the people of your town. Most of these Plushkins are just downright adorable, and a lot of the more powerful ones have some very unique designs. However, you can tell that some of the Plushkins were made just to be fodder to level up your more powerful ones. When leveling up higher tier Plushkins it becomes a bit tedious as they level up slower. This is where you can grind up a lower tier one to a decent level and well basically sacrifice it to the more powerful one so it can gain a level or two.

The Plushkins do their job well when it comes to a creature that you want to capture and train. I should mention, unlike Pokemon, you can’t just catch a wild Plushkin in its natural habitat. You have to form a contract with them, and not every Plushkin will want to forge a contract with the person who just beat the literal stuffing out of them. Sometimes you will have to give them friendship items in battle to make them warm up to you so they are willing to go along with you. Other times you just have to hope that powerful Plushkin that you wanted to join your party will actually like you. I can see why they did this though. It prevents the player from just catching every plushkin that comes in front of them and just use them as fodder to level up more powerful ones. That being said, I do wish the “catch rate” was a bit higher.

Overall Moco Moco Friends is a solid first JRPG for anyone wanting to get their younger sibling, child, plushkin master, into the genre. It takes a lot of JRPG gameplay mechanics and ideas and makes them simple enough for almost anyone to get a grasp of. That being said, for those of us who are veterans of the JRPG genre there really isn’t much that can be offered to you here. Unless you just want a huge dosage of cuteness I could only recommend this game to those wanting to get those who are younger into the JRPG genre. For that is where the game does the job well.

-The gameplay gets very mundane and repetitive

Posted on January 7, 2016, in Reviews. Bookmark the permalink. Leave a comment.