Senran Kagura Estival Versus is the newest entry in the Senran Kagura series. This entry brings our girls to a mysterious island where shinobi who have passed away aren’t ready to move on yet. So, it’s up to the Hanzo, Hebijo, Gessen, and Homura squad to fulfill the task asked upon Asuka’s grandmother – to complete the Kagura Millennium Festival. To complete this festival, each group must protect their platforms from each other for eight days.

Introducing (from left to right): Kafuru, Renka, and Hanabi. They are the Mikagura sisters. Like you, they were asked to help with the festival, although these girls are shrine maidens. Not ninjas.

As per usual, the story of Senran Kagura is far from important and not very interesting if you don’t like the characters. The story in Estival Versus, is a continuation of all of the hanging plot threads left behind in Shinovi Versus. Meaning, some of the events of Shinovi Versus all happened in one way or another which doesn’t make much sense, but Estival makes it work. That said, to make it clear, there aren’t four different story modes to choose from, but one lengthy campaign. The story itself isn’t so bad. While I didn’t enjoy it so much as I did Senran Kagura 2, as nothing was necessarily serious, watching some of the girls learn to deal with the loss of their loved ones was really charming. It was especially funny and at the same time sort of sad seeing one of them completely change personalities from just spending time with them. 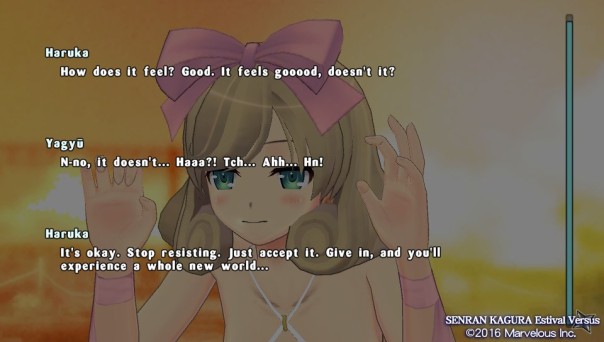 Of course, at the end of the day, this is Senran Kagura so expect a ton of sexual harassment from the usual suspects.

There are three different types of missions to choose from. Kagura Millennium Festival, Shinobi Girl’s Heart and Special Missions. The Kagura Millennium Festival contains the game’s story missions. All of the story objectives are pretty much the same: go from point A to point B while beating up the bad guys along the way and eventually the boss/bosses. There are a couple with a time limit but that’s about it. What’s cool about the fact that the story mode is one campaign however is that this means you can play every story mission with literally any character. Meaning, if you really want to, you can A rank every mission 32 times multiplied by the fact that there are three difficulty settings. Remember when I said that the reason why the girls are fighting in the first place are to protect their platforms from opposing groups? Well, eventually destroying enough will unlock a Shinobi Girl’s Heart mission which is essentially a character’s side story. The special missions are where the DLC missions are held. 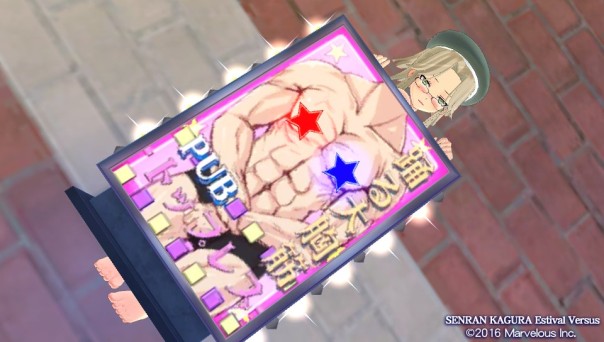 If you use a Ninja Art at a certain spot on the map you can do a creative finisher where the environment will creatively finish your opponent.

Due to being released on the Playstation 4, the Righteous Boobage Producer™ Kenchiro Takaki (the actual producer and director of the franchise) has decided to give the game a major face lift in terms just about everything. In terms of gameplay, even with its ever expanding roster, no two characters feel the same in terms of play style. Everyone is very distinct from each other. Yomi, for instance, is a very slow hitting character due to her huge sword, but it’s made up for in the amount of damage she does with a clean hit. This game is overall much more combo heavy than any previous entry. Granted, this is partially due to the fact that there are now much more enemies on the screen, (especially if you’re playing the PS4 version) but, right out of the gate you’re given a lot more combos to do and they eventually only get longer. Creative finishers have been added which are basically small vignette you could possibly trigger when you’ve dealt enough clothing damage and hit them with a Ninja Art on some parts of certain maps. There are now AI teammates during some missions as well. They fight alongside you during missions and transform when you do. Sadly, they’re sort of brain dead and oddly just stand around from time to time even though an enemy is right next to them. Eventually they will go attack them, but it’s pretty bizarre to see. If anything, before you had AI companions, you could essentially just combo an opponent and then aerial rave them (basically follow up your combo with another one while in-air). In this game, they can help out with this in its own special variation. You can even run on walls in the game now, which can provide another attack to use or can be used to dodge oncoming fire. Gameplay wasn’t the only thing that’s gotten bigger and better either. Due to the ability to wall run, some maps are made with verticality in mind which, of course, wasn’t necessary before now. But now, even old maps are made bigger due to this accommodation as well as the fact that they have to hide the platforms from you. Graphically this game is much better looking than its predecessor with better breast physics… if you’re down with that.

Did I forget to mention that there are mechs you can fight in and fight against too?

As much as the gameplay has improved, the dressing room has improved as well. Now you can customize 3 (or 5 if you’re on the PS4 version) characters at once with a much, much more robust line-up of clothing options and lingerie than before. If you’re the creative type, however, there’s a diorama mode in which you can make your characters’ pose in various ways. If your good at it, you can make some really interesting stuff. But if you’re like me, it’ll just be some simple default poses and nothing more.

This is something super, super simple. As in I only toggled a few menus and added a filter.

There are some multiplayer modes as well. This features several different modes, from free-for-alls to death matches to even a horde mode (with an additional 3 other modes). You can play with up 4 total players (10 players if you’re playing on PS4). It doesn’t feel tacked on, but with the fact that there are AI companions in some missions, it almost feels like a wasted opportunity for you not to be able to do some missions with a friend. 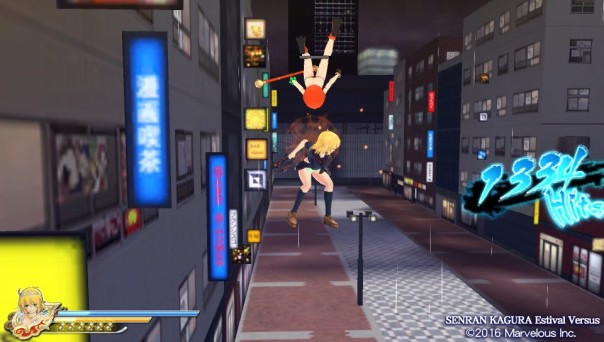 It’s quite easy to pull off long combos from the start.

At the end of the day, this game is filled with so many great improvements that the Vita can’t handle it all sadly. Between the subpar framerate and long loading times, at first it almost makes me want to go back to the much simpler Shinovi Versus, but this game is so much better that it can be overlooked quite easily. Of course, if you’re playing on a PS4, these issues are nonexistent. Another gripe I have with this game, however, is that, there were times where my enemy would appear literally out of the fighting area meaning you’d have to restart the entire mission from the beginning. Thankfully this only happens in a handful of missions, but truthfully this shouldn’t happen at all. 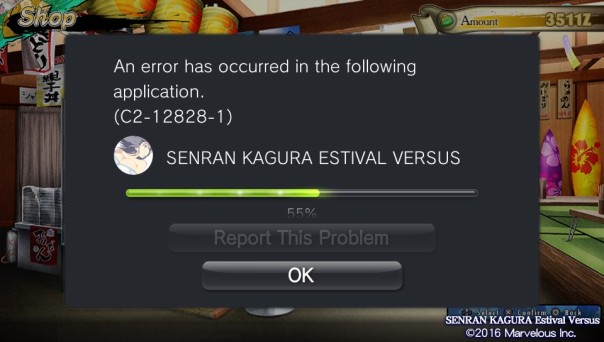 There was also some weird error when I entered the shop, but that was a one time thing. No big deal.

+ A solid improvement over its predecessor in every way

Posted on March 15, 2016, in Reviews. Bookmark the permalink. Leave a comment.