A review copy has been provided by XSEED Games

Stop me if you’ve heard this before: it’s a dark and stormy night after the school festival, seven children in charge of cleaning up stop to tell a ghost story about “Heavenly Host Elementary,” and how a teacher died in the school. Shortly after, the school was shut down and destroyed. In on it – their teacher decides to spook one of the students. Shortly after, a character’s little sister stops by to bring them their umbrella as they forgot it at home. Due to the fact that another character is moving away, the cast decides to perform the “Sachiko Ever After” ritual, a ritual that works as a charm in that, once performed, you will be best friends forever with the people you did it with. In this circumstance, not only are these nine people now BFFs, they’ve also been teleported to “Heavenly Host Elementary.” If you’re familiar with this introduction, then you’ve probably played Corpse Party already on the PSP which was Corpse Party Blood Covered… Repeated Fear. In that sense, outside of some minor details, these versions are incredibly similar.

Corpse Party is an adventure game that takes place within “Heavenly Host,” a completely broken down school. Thank goodness the game uses sprites, otherwise it wouldn’t be a pretty sight. However, while the game does use sprites, the atmosphere is quite horrific. Dead bodies everywhere, buckets filled with urine, spirits roaming around, nailed down doors, gaping holes in the floor, broken windows, immovable objects; combine all of that with the game’s music, and you’re going to have a FUN time if you decide to play it in the dark. The game’s sound design and writing is what makes this game shine, because even though you won’t be seeing anything gory from a visual perspective, you’ll certainly be reading about every stab or every slice and with how it sounds.

While there is nothing you can fight, you do have health you need to worry about. Not all spirits are your friends, as some will actively try and kill you. Although, truth be told, you have more to worry about: some ghosts will flat out kill you if they catch you, instead of just causing minor damage. With no map, the last thing you want to do is run around in circles with something chasing after you, so make sure to learn the current layout quickly (yes, current, as in it will change on you after an advancement in the story) to get it over with. Along the way you’ll find various writings on the walls and the floors. Remember the saying “curiosity killed the cat?” Well, that takes full effect here. You’ll never know which ones are cursed until you read them. If you read all of a victim’s memoir in a chapter, it’s game over. Game overs in Corpse Party aren’t just simple fade to blacks and restarts; consider them a branching path in the story. Some bad ends are obvious when gotten, but others just continue and you’d have no idea until it all blows up in your face. That said, with how they’ve gotten, they can be incredibly cryptic. Anything from a simple decision like going into a locked room, or even worse, going into an unlocked room. The simple fact is that overall, exploring too much just might get you killed, so be sure to tread carefully.

Corpse Party on PC (in Japan) was released in an episodic nature that remains in this version,  as well as each chapter can be played without having played the previous one as they’re all unlocked from the start. They each have their own save states as well. Of course, doing something such as playing the final chapter first wouldn’t be ideal narrative wise, but if you want, the option is there.

The characters in Corpse Party are unfortunately built in a way that you know who’s going to fall victim to the school; it’s just a matter of when. With some of them, it’s really the mere fact that you never see anything from their perspective or play as them which is really unfortunate.

It should be noted that the PC version of Corpse Party runs absolutely fine with no hiccups whatsoever. Although, the game runs at a constant 4:3 mode so if you want to use a 16:9 resolution you’ll have to enjoy your black bars. 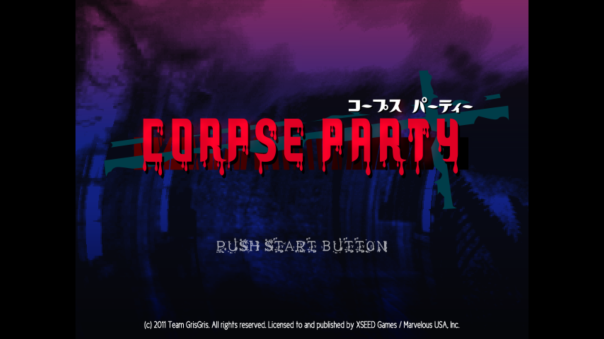 Ultimately, if you want Halloween to come early, this game is a great fit. While jump scares don’t necessarily exist in this game (unless you want to count walking normally and then spotting a ghost that you know can immediately lead to a bad end), the mood and tone of this game just fits so well. If you’re a fan of the PSP version, while being incredibly similar, the little extra it adds might interest you.

Posted on April 25, 2016, in Reviews. Bookmark the permalink. Leave a comment.