In the recent investor’s meeting from Nintendo, Nintendo was happy to report that Splatoon’s success continues to shine even as we approach the one year anniversary  of the title. Nintendo has reported that they have shipped 4.27 million copies of Splatoon.

The driving factor behind Wii U hardware sales over the fiscal year ended March 2016 was Splatoon, released in May of last year. Strong sales have continued into 2016, leading us to ship 4.27 million units worldwide in this fiscal year. This title started off with early appeal among core gamers and has gradually spread to the young consumer and female demographics, providing an excellent illustration of Nintendo’s strengths.

Splatoon is also still extremely popular in Japan, with currently 1.49 Million units sold, and with 790,000 players participating in the most recent Splatfest in Japan alone.

Nintendo has also reported that in Japan alone the Splatoon Amiibos have sold near 1 Million units. 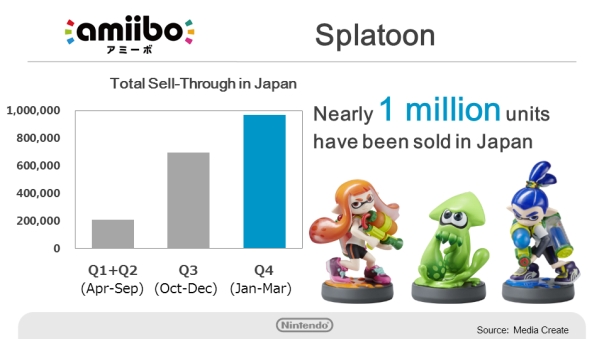 It’s really good to see a new IP from Nintendo taking off extremely well like this. It will be interesting to see how sales continue to grow, and what future the series has.