ESRB Rating: The PC release was not rated by the ESRB, the original Vita release is M

Thank You XSEED for providing a review copy of this game.

The girls of Senran Kagura: Shinovi Versus are back, but now in 1080p and 60 frames per second. Shinovi Versus was previously exclusive to the Playstation Vita, and this new version of the game supports higher resolutions, framerates, the ability to play with Japanese text, and all of the DLC is included. 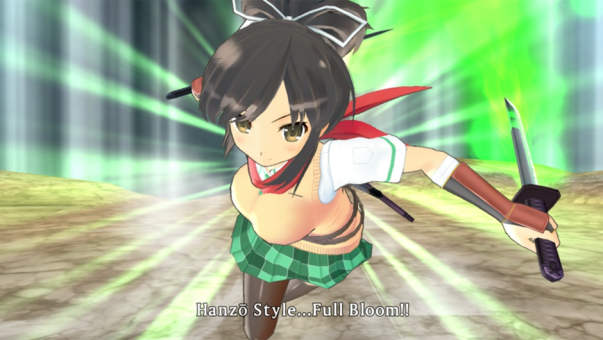 The 22 girls you play as in Shinovi Versus are split up into four schools; two schools of five and two schools of six. When you select which school you want to go to, you have a small prologue of their story to read. After that, you reach the main hub. The main hub for all 4 schools contains the same content: a shop, a changing room, the mission select area, the options, and of course the girls themselves and their teacher. The shop is self explanatory, as you can buy in-game music, CGs of important scenes, accessories, and you can have your hand in the panty lottery where you try and win over 90 different pairs of undergarments. You can take all of the new accessories, panties and outfits you bought in the shop and customize the girls with them. You can change their undergarments (unfortunately mismatching isn’t an option), their normal everyday outfit and well as their ninja outfit. 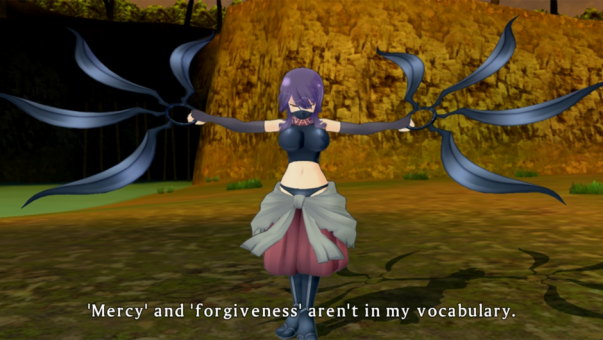 The mission select area contains four components: tutorials, story missions, Girls Heart missions, and online. Each school has their own story and while they don’t tie in together in this game (in fact some even contradict each other), they’re all the same in terms of story structure: School A fights School B for reasons, may potentially fight schools C&D for some reason although these are for lesser reasons or even might be just for training purposes. Girls Heart missions are essentially side missions based around a specific character. They’re five missions long and are pretty whimsical in nature. Story missions and Girls Heart missions are structurally based the same as the main idea is to just beat everything in an area and move on to the next section to do it all over again until you reach the boss of the level. The gameplay itself is very musou in nature. Getting a combo chain in the hundreds is pretty easy to do as countless enemies surround you. In case you find yourself in a bind, or if you just want to end things quickly you can either transform into your ninja outfit, or you can forgo everything but your underwear and enter Frantic Mode. A normal transformation provides bonuses in all stats as well as completely gives you back all your lost HP whereas Frantic Mode massively raises Attack and Speed at the loss of defense. In both of these forms you can use your Ninja Arts. You can use these arts by either raising the meter when comboing, or finding a scroll hidden in the stage. These arts actually will damage the targets clothing and it’s entirely possible to strip them naked (although censored of course) at the end of a bout. If playing in story mode, any damaged clothing is carried over for the rest of the scene. In terms of online there are three modes: Death Match, Understorm, and Strip Battle. Death Match is a battle royale where people are put against each other. Understorm is a mode where panties are falling from the sky and who has the most wins. Strip Battle is a mode where the name of the game explains the mode, the more people you strip the more points you get. All three modes provide either a one for all or co-op option. 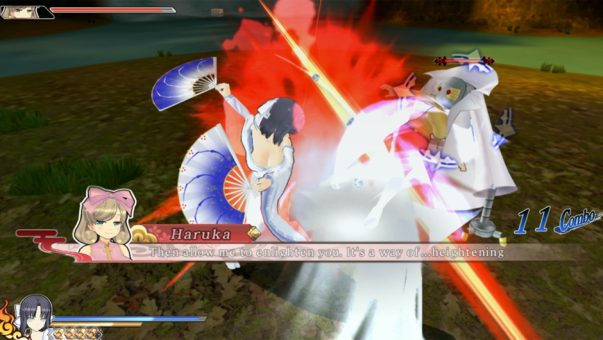 Shinovi Versus’s port job is okay but it has some weird issues. For one, the loading times from the original Vita version of the game still exist. Granted, the loading times provide you with tips on characters, there’s no reason as to why it should take this long on PC. Secondly, for a game that’s regarded as a 60fps, some of the animations are either still 30fps or just doubled the speed.

In the end, Shinovi Versus was and still is a really fun game to play. If you already have the Vita version, there might not be enough incentive to dive into this version unless resolution and frame-rates are a big thing for you. While I wouldn’t recommend playing this from a story perspective as the original game isn’t available on PC, the gameplay and content available makes the game worth its asking price.

7/10
+The game is still incredibly fun

Posted on June 29, 2016, in Reviews. Bookmark the permalink. Leave a comment.