Thank You Spike-Chunsoft for providing a review copy of this game.

Back in 2009 the first Zero Escape game known as 999: 9 Hours 9 Persons 9 Doors was released. While it didn’t sell very well, it ended up being a cult classic, and deemed one of the Nintendo DS’s best games on the system. Series director and writer Kotaro Uchikoshi was given a second chance and released it’s award winning sequel Virtues Last Reward. Of course, awards are nice, but subpar sales are not thus, the series was quietly canceled… Not wanting to be left off on a cliffhanger, fans asked and pushed for the trilogy to at least be completed, and, through a miracle, Spike-Chunsoft decided to green light it. Please note that because this game was greenlit out of fan demand, it is highly suggested that you play the previous two entries first as it’ll be very easy to get lost if you don’t have any background knowledge of what’s happening.

On the surface, ZTD’s overarching plotline is very simple: follow nine people that have been kidnapped by a person cloaked in black going by the name of Zero. All Zero wants these people to do is play a simple decision game where every choice they make will have dire consequences. The initial example Zero gives is a simple game of Heads or Tails. He tells them that if they win, they will all be set free like this never happened, if they lose, the only way to escape is to have six X-Passes. The only way to get an X-Pass is if someone dies, so when at least six people die, everyone else has a chance to escape.

From 999’s visual novel style of play, to Virtues Last Reward’s idea of a branching timeline, Zero Time Dilemma changes the formula even more. They do this by not only removing the visual novel segments entirely by being completely cinematic, but even goes as far to completely hone in on the idea of a branching timeline by making the story completely nonlinear. You see, in ZTD the order which you do things doesn’t matter simply because of the fact that every ninety minutes the cast is hit with a drug in their watches that forces them to fall asleep and are hit with a second drug in their unconscious that state makes them forget said previous ninety minutes. Due to the fact that these people are only awake in ninety minute chunks, the game calls them Memory Fragments. Because of the fact that the nine of them are split into three teams of three, you can do most of the memory fragments of one team before moving on to another if you choose to do so. That said, don’t expect to be able to figure out a way to go through the game in a linear manner. Multiple routes aside, when you select a memory fragment, you see how long it is, yes, but you won’t know which route you’re in until you’ve made your choice. 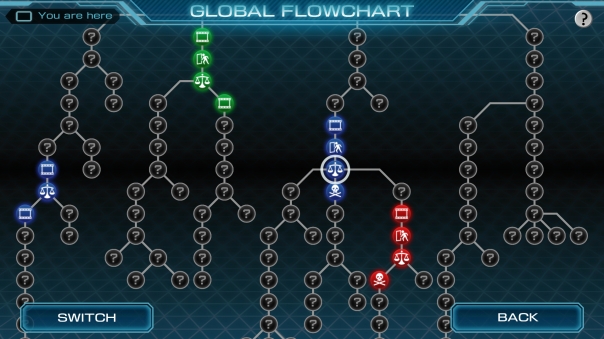 Everything about the story in this game is top notch. Due to the fact that everything is told in small vignettes, the pacing is almost pitch perfect. Most fragment sections boil down to a cutscene, the escape-the-room segment, a choice to be made, and then the result of that choice. There was just one or two scenes that felt that like they dragged on for too long. Again, if you have not played through the previous two games you may feel lost on some pieces and will just have to accept them as they come. If you have, you will be treated very kindly with this game. Granted there are a few things in this story that didn’t feel like they belong. These won’t be discussed for spoiler reasons, but in the grand scheme of things, that doesn’t necessarily matter. Overall, this game is just heavy, dark, gory, disgusting, and at the same time it can just be incredibly beautiful. The game can just effortlessly bring out a plethora of emotions within you.

The puzzles in the escape-the-room segments of the game I found to be disappointingly easy. There are some rooms that provided a challenge, but this game gave you the answers on a silver platter. Of course, that’s not to say that all of them are easy, just what felt like most of them. Admittedly there were some where I was just stumped as to how I should progress and there was only one that I actively hated. Nonetheless, the quality of most of the puzzles were pretty well thought out.

The only bad thing that I can honestly think of when it comes to this game are the facial animations. Now, I don’t normally go hard on graphics or any technical aspects of games all that much, but this is pretty bad. Granted, this game is lucky to even get out the door but this is pretty janky. Movements look stiff and facial animations are just absolutely awful to a point where they barely lip sync the English dub and the mouths don’t even close some times when a character is finished talking. Of course, that’s not to say that the game should’ve went back to its visual novel style presentation of the previous games because the way the game is presented in these cinematic scenes are absolutely fantastic and were able to draw me in much deeper than the other games.

At the end of the day, this is an absolutely fantastic game that’s only bogged down by its animations. However, at the same time, this is a wonderful example of where the technical problem they couldn’t get down doesn’t harm the enjoyment of the whole. What does harm the game’s overall enjoyment is just how lost one might be if they didn’t go through the previous games. Even so, while this potentially ends the franchise with a weird bang, it’s a bang nonetheless.

+Great directing in the cutscenes
+Fun puzzles to solve