This morning Deep Silver came out with an announcement about a partnership with Atlus and SEGA: 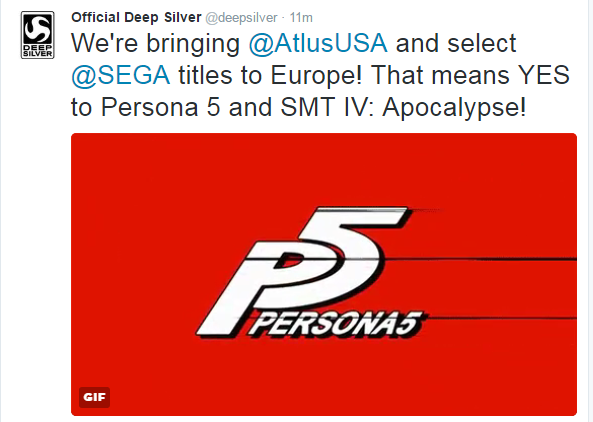 It is good to see that Atlus has found another publisher after NISA decided to go their separate ways from the JRPG giant. In the past Atlus and select SEGA games have had a difficult time making their way into Europe. Let’s hope that this new deal between Atlus and Deep Silver will speed up the time it takes games to hit Europe. Deep Silver has confirmed their first games they are brining over are Persona 5 and Shin Megami Tensei IV:Apocalypse.

Update: Atlus has released an official PR release in light of the news, including a statement from Deep Silver:

Munich, Germany, July 6 – Deep Silver, SEGA® of America, Inc., and Atlus U.S.A., Inc.are entering a collaboration to publish multiple ATLUS- and SEGA-brand titles on consoles and handheld devices across all European & PAL territories.
The publishing deal will cover the wide array of future titles for both physical and digital versions across PAL territories, including the SEGA title 7th Dragon III Code: VFD, and the ATLUS titles Shin Megami Tensei IV: Apocalypse, and the hotly anticipated Persona 5.
“We are delighted to have signed this publishing partnership and look forward to using all our pan-European publishing network to maximize the potential of the ATLUS and SEGA games” said Dr. Klemens Kundratitz, CEO of Koch Media/Deep Silver.
“In entering this partnership with Deep Silver, I am truly delighted we will be able to release our titles in the European regions,” said Naoto Hiraoka, CEO, Atlus U.S.A., Inc., and senior vice president of publishing, Sega of America, Inc. “Not only does the deal span multiple titles, but Deep Silver has a strong presence in European and PAL retailers. They have a strong passion for being able to deliver physical games to our fans in those territories, which we hold in high regard.”
–PR

It should also note the first 3DS game they will be publishing 7th Dragon III Code:VFD won’t launch at the same time it does in the US.

Posted on July 6, 2016, in Announcement, News. Bookmark the permalink. Leave a comment.