The Righteous Boobage Producer – Kenichiro Takaki strikes again but this time, with a new series. The girls in this series aren’t ninjas, they’re just normal girls that so happened to come down with a terrible and mysterious condition. 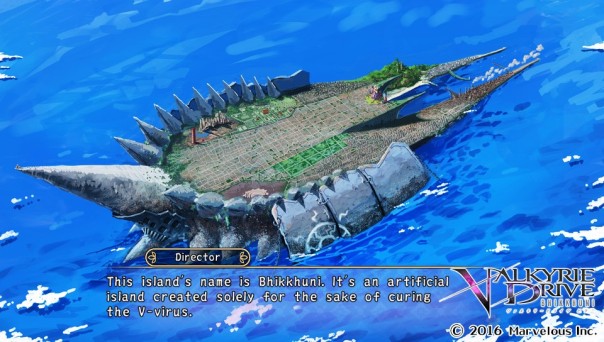 If you’ve heard of or seen the anime for “Valkyrie Drive” or the mobile game, the premise is more or less the same as they take on three different islands right next to each other. If you haven’t heard, to make a long story short: the world has contracted a weird disease where young girls have the ability to turn into weapons. This danger has led to the world to come together and essentially isolate anyone that’s contracted the virus on one of potentially five islands. Said virus comes in three different forms: the V-Virus variant (where you gain the ability to become a weapon,) the A-Virus variant (that allows you to wield said weapon,) with the last is being able to do both – the VR Virus variant. In the case of Valkyrie Drive: Bhikkhuni, all of the playable girls are able to do both.

The leads of Bhikkhuni are the sweet and ever loving Rinka and her almost polar opposite twin sister Ranka, as well as the people they meet along the way. It’s said that anyone that has come to the island has a high chance of being cured. The supposed secret is about learning self control, so fighting is permitted at all times outside of some safe spaces like the cafeteria. That said, the story is more than just fighting to control their virus, as not everyone living on the island care about going back home, since they have their own agendas to attend to.

Bhikkhuni is a pretty interesting evolution of Senran Kagura’s Versus series in terms of combat. At the start of every mission you choose two characters: a Liberator and an Extar witch (the term of the V-Virus holder and the A-Virus holder respectively). This is where most of the game’s replay value comes in, as all of the characters in the game come with two different level up systems. The game’s combat is a very combo heavy beat ’em up. While there is no dedicated run button, there are a dedicated dash button, dodge button and three attack buttons – one normal, one unique, and one that launches the enemy in the air. This doesn’t sound like much, sure, but you won’t be mashing buttons,  as all of these provide extremely fast-based combat. The game has a ton of ways to combine all of these attacks, especially dodging, the dash, and the launcher technique. The entire game is based around combining the dash with these techniques, as when successfully done, your attack raises for the extent of the combo. Once enough damage is done, your synchro gauge will fill up; once filled, your health will refill and you will become stronger because your partner became your weapon. Depending on the level of the Extar, this can happen a few more times, or you can spend the gauge on doing a special attack. To be honest, when there are just generic enemies towards you, the gameplay is great. But when it comes to other actual characters the gameplay doesn’t live up because once the mission is over, you get your ranking and a pool of experience points to share between your Liberator and Extar. This is where the “two separate levels” bit comes into play, as the girls have separate Liberator and Extar levels. So you actually have to max out the girl’s levels twice with Extar, requiring much more experience to level up. Also, keep in mind the rank you receive at the end of your mission is pretty important, seeing as how well you do in some missions will affect the storyline.

Outside of the main storyline there’s a survival mode, a challenge mode, and three online modes. Sadly, none of these modes offer experience points and the online is more or less dead. So unless you have a friend, have fun fighting CPUs. That said, the melee mode is kind of fun. Instead of the usual 3D arena battle ground, it becomes a 2D fighter with the objective is to get your opponent off the stage. Granted, this mode is a lot more frantic because the stage is much, much smaller than the arena and generally there are 4 characters on the screen so everything just feels a little claustrophobic. Lastly, there’s the dressing room where you can dress up and play with the girls. There’s even a mini-game segment on it if you play with them enough. 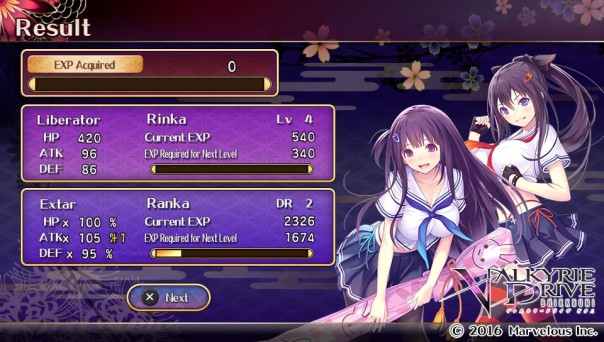 In the end, despite its anime counterpart taking perversion to the next level yet stopping just before being considered pornagraphy, this game is actually one of Takaki’s tamer games of the giant breast hyper battle “genre”. Sure, it still contains the usual mechanic of clothing being ripped off and the small cinematic that comes with it is still the same as the changing dressing room mechanics. But despite all of the sexual appeal, there’s a good gameplay mechanic underneath that just can’t seemingly take off the way the game wants, which is sort of disappointing.

Posted on November 21, 2016, in Reviews. Bookmark the permalink. Leave a comment.