Thank you XSEED for providing a review copy of this game.

Exile’s End is a Metroidvania developed by Magnetic Realms released on PC, Wii U, VITA and PS4. Does it capture the feeling of an exploration focused side scroller while being cinematic? Read to find out.

The story begins with a meeting about the L-735 digging site and that it has not been able to be contacted for the last twenty days. The mission is to go investigate and see if anyone is alive. You play as Jameson, a man who was dishonorably discharged due to the “miner’s ridge” incident. The team is against this, but the captain does not care and proceeds to begin the operation. However, your ship begins a self-destruct sequence and you’re forced to use to escape pods to head to the planet. Upon arriving there is very little signs of life, until you research the research station. There you find all the researchers and miners have been completely zombified. It is up to Jameson to find out what happened and escape the planet. 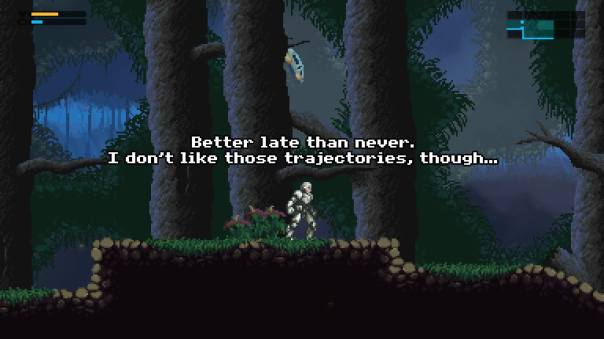 The story is completely inconsequential however there are data logs thoughout the game you can access via computers that give you information on the shady, corrupt corporate deals going on within the game’s universe that lead to the events that transpired. Jameson isn’t a silent protagonist so he will comment on various things throughout the game. Playing as a jaded old man can lead to some funny observations on his part, especially when he is insulting the organization he works. Thankfully you can move while he talks so it will not disrupt the pacing.

However, when it comes to being a Metroidvania, Exile’s End fails to capture the feeling of what it was inspired from. The biggest issue with Exile’s End when it comes to the gameplay is the first hour where you have no means to defend yourself from enemies that blend into the environment and you take fall damage from a very strict height. The fall damage would not be an issue if you could see below you more reliably, but unfortunately that is not the case. There are many times where the game wanted me to guess if I would land on a floating platform or fall into a pit of spikes leading to instant death.  Later you can upgrade Jameson to no longer take fall damage, but he still winces from the fall for at least two seconds, leading to situations where an enemy can attack you and you’re powerless to do anything. The most aggravating aspect of the game is the lack of a reliable map feature. The game displays the map feature on the top right of the screen and shows you a small portion of the area and shows you exactly where you are. However, you cannot check the entire map, zoom in and out or see if you’re close to any specific area. This caused hours of wandering around, not knowing where to go and because areas are designed very similarly with no distinction it turned the four to six hour experience into a ten hour slog.

The game autosaves every time you enter a room with no way to turn this feature off. This sounds like a blessing, but it is disguised as a curse. Health drops are very rare and in the beginning there are none with fall damage. The reason why this is a curse, is because if you have very low health to the point a breeze will kill you, you might be stuck and can’t continue the game ESPECIALLY in the beginning. For this review I had to restart the game three times because I couldn’t progress the story.

The way the game handles combat is very poorly as you cannot move and shoot. This a missed opportunity as the idea of barreling through enemies like a mad man could lead to fun and frantic gameplay. It just feels like I’m wasting time especially since stronger weapons like the sub-machine gun use ammo. It also can hinder the gameplay as enemies move very fast and often there are groups of them. So being forced to stop can cause a bombardment that can lead to frustrating deaths. Due to these issues, the experience ruined for me and I cannot recommend the game to fans of this genre.

The is a survival mode where you go from room to room defeating enemies with various weapons and power ups under a time limit. This will surely allow players to test their skills at speed running, but it reminded me of the missed opportunity of being able to shoot and move at the same time. This mode would have been perfect for gameplay like that.

The best aspect of the experience was the presentation. Smooth pixel art animation gave me a nostalgic feeling of the Gameboy Advance era of exploration focused side scrollers. The wonderful atmosphere drives home the isolation of being trapped on a planet looking for a way to escape. The sound track while not remarkable, fit the areas and cemented how dangerous the environments were. The game has gorgeous art work and the cut scenes that do play create a very nice cinematic feeling that usually is not present in this genre.

Exile’s end failed to give a satisfying experience and left a lot to be desired. While it has a pretty good presentation, it is not enough to justify a purchase. With no map, a slow beginning, and unfair game design, the game left a bad taste in my mouth

Posted on December 3, 2016, in Reviews. Bookmark the permalink. Leave a comment.