A Review Copy Was Provided by Nintendo

Indieszero, known for their work on the Theatrerhytm games, have brought us a brand new IP with an interesting concept. Sushi Striker is a puzzle action title, set in a world where Sushi was outlawed due to the dish causing wars and strife. The main campaign is a silly, shonen-like story that is incredibly entertaining if you just turn your brain off, and enjoy the humorous writing. This premise is way too ridiculous to be taken seriously, but it seems that way on purpose. 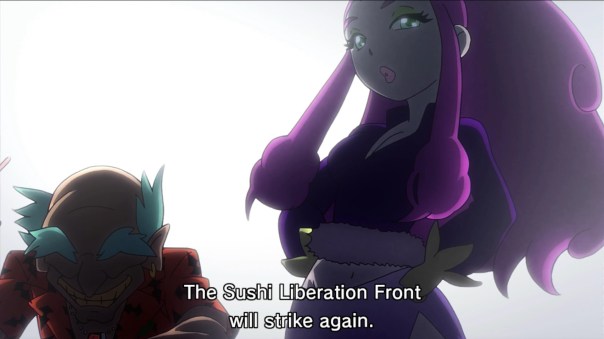 You’ll be in this mode a lot as the single player can range from ten to almost 25 hours. It has a lot of meat to it due to reasonably sized list of levels and missions. Though, trying to 100% the campaign became quite tedious as every level needed to be replayed at most three times to fully complete. Tedium aside, the core gameplay is addicting, fast, and very fun. After every mission, you will gain experience that go towards level ups to increase your HP, and attack strength.

The goal in Sushi Strikers gameplay is to stack as many plates of Sushi of the same color as possible, then letting go to pile up your total amount of plates. Then you will fling them at your opponents to cause them to take damage. Once the health bar depletes to zero, you win. You can toss them right away, or build up a stack, and increase your damage. Then there’s the Sushi Sprites which give the player abilities such as a shield and make your opponents lanes move faster. 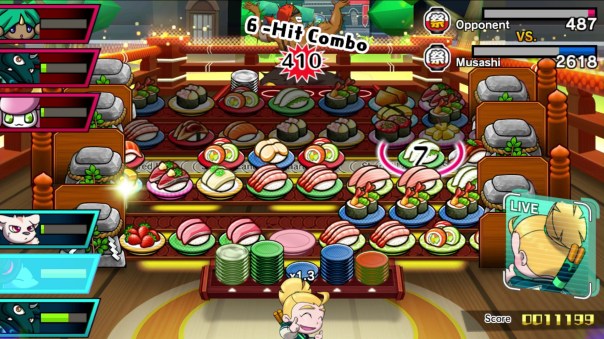 The game quickly rewards on the fly thinking, as well as patience, and planning. This all applies to your opponent as well, and you’ll be competing to keep those combos up since there are seven sushi belts constantly moving. You and your opponent have three each and one shared. This gives the game a competitive edge for matches with two human players, leading to very fun times, or the loss of your best friend, whether it be locally on one screen, two screens, or online. 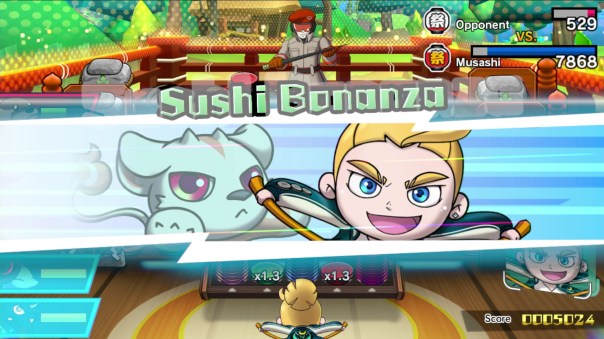 The game supports every control option the Switch has to offer, but the absolute best one is touch screen. Being in full control of your combo thanks to the added precision is a pure blessing. This game is perfect for handheld play as the art is much crisper on the Switch display, and overall much better suited for handheld play due to the casual pick up and play nature of puzzle games.  Every control option still does the job very well, but in this case touching is good.

The weakest area of Sushi Striker is the overall presentation. The art direction just doesn’t do anything for me, as the faces on many characters are off-putting, and the designs are generally not memorable. At first glance, the title looks like a flash game, which is caused by the art style being too simplistic for its own good. The English voice acting is pretty underwhelming, with some actors giving poor delivery on various lines, but offering a better performance on other lines. The inconsistency was very distracting, and with no dual audio option this is very limiting to the player. The sound design issues don’t stop at acting, as the soundtrack is pretty underwhelming outside of that absurdly fun opening intro. The music is frantic, it fits the game, but it just never stuck around unfortunately.

Overall, Sushi Striker offers a fun frantic experience that shows that any silly premise can be made into something enjoyable. Underwhelming experience with the presentation aside, this game is so fun, it was almost completely surprising in of itself that it was this good. The price of entry is ten Dollars more than the 3DS version, but with no big differences between either the choice is entirely up to you. However, 50 USD is pretty steep for this title. Try the demo on the eshop, and go from there.

There are very few franchises with the same consistency as Kirby. Though it may not be for everyone, every main series entry manages to engage its fans with a surprisingly deep power up system and simple level design. Does Star Allies manage to keep this formula fresh or is the gameplay starting to become stale? Aside from one returning mode, there will be no spoilers regarding the post-game content.

END_OF_DOCUMENT_TOKEN_TO_BE_REPLACED

The original Bayonetta created new standards for the action game genre, but the series never took off in the way Platinum games and Sega wanted. It was very likely that a Bayonetta 2 would be a pipe dream. That is until Nintendo stepped in and brought this passion project to life, bringing gamers one of the greatest action games of all time. Now they’re in your hands wherever you go on Switch.

END_OF_DOCUMENT_TOKEN_TO_BE_REPLACED

“Fire Emblem Echoes: Shadows of Valentia” is a remake of “Fire Emblem Gaiden,” a game that was never released outside of Japan. This is a true modern take on the original thanks to a revamped gameplay engine and a fully voiced cast. This may be one of the best entries in this strategy RPG franchise.

END_OF_DOCUMENT_TOKEN_TO_BE_REPLACED

Thank You Nintendo for a Review Copy of this Game

Pokemon Sun and Moon revamped the structure of the series by doing away with the traditional gym challenge, and replacing it with the island challenge. The island challenge is a much more personal journey, where the player travels across Alola to clear trials from seven captains, and become the island challenge champion. Where this differs from gyms, is what you’re doing in each trial. Some trials involve defeating wild Pokemon to advance, solving puzzles, or even a simple memory game. At the end of each trial is a fearsome Totem Pokemon. A gargantuan version of a Pokemon that is related to that island. After every trial on an island is completed you fight the Kahuna, the strongest trainer on the Island. As a new trainer in the Alola region, can you conquer the Island challenge?

END_OF_DOCUMENT_TOKEN_TO_BE_REPLACED

Thank You Nintendo for Providing A Review Copy of this Game

The Professor Layton franchise has managed to achieve consistency in quality ever since its first entry released ten years ago. Azran Legacy was the end of a very solid prequel trilogy, and here we are going forward with a brand new cast of characters. Does Lady Layton continue to provide an excellent Visual Novel and Puzzle game experience? There will be no major story spoilers in this review.

END_OF_DOCUMENT_TOKEN_TO_BE_REPLACED

Pokken Tournament is a Pokemon fighting game developed by the talent behind the Tekken series, originally made for Wii U and Arcades. Instead of just making a Tekken game with a roster entirely made up of Pokemon, the developers decided to go a different route by combining 2D and 3D gameplay. Pokken Tournament DX sports new content, and a few quality of life changes to make the experience much better, but how much better is it overall?

END_OF_DOCUMENT_TOKEN_TO_BE_REPLACED

Metroid: Samus Returns is the return of a classic Metroid adventure made from the ground up on 3DS hardware. Thanks to a plethora of new additions in content and gameplay, this is the true way to enjoy Samus Aran’s mission to eradicate the Metroid species, and bring peace to the galaxy.

END_OF_DOCUMENT_TOKEN_TO_BE_REPLACED

Let’s cut to the chase, Sonic Mania is the true Sega Saturn sequel to Sonic 3 and Knuckles we never received. Made by big names in the Sonic fan community this game is a testament to why we love the hedgehog in the first place. Christian Whitehead definitely knows what he’s doing, and thanks to Head Canon, Tee Lopes, and PadogaWest Games, we have something that will be remembered just as fondly as the classics.

END_OF_DOCUMENT_TOKEN_TO_BE_REPLACED

“The Nonary Games” is an excellent way to jump into the Zero Escape franchise as it contains the best version of “999: Nine Hours, Nine Persons, Nine Doors” and a good port of “Virtue’s Last Reward.” It’s thanks to the dedicated fans that the third Zero Escape entry was released, and that we received this excellent collection, all due to a renewed interest in development. This review is spoiler free and focused on the PC version.

The story of 999 takes place on a sinking ship where Zero, the main antagonist, kidnapped a group of nine people and is forcing them to play the Nonary game. The characters have watches locked to their arms with a number. The cast has to split into two groups, with the player having control of where the main character, Junpei, goes. The cast can only be in groups of three to five people and their watches have to result in a digital root matching a numbered door. After going through the numbered door there will be a puzzle room or two for the player to complete. Every puzzle room gives various hints towards future plot points, and alludes to Zero’s identity. It’s a wonderfully written story with laugh out loud dialogue and a genuine sense of mystery. 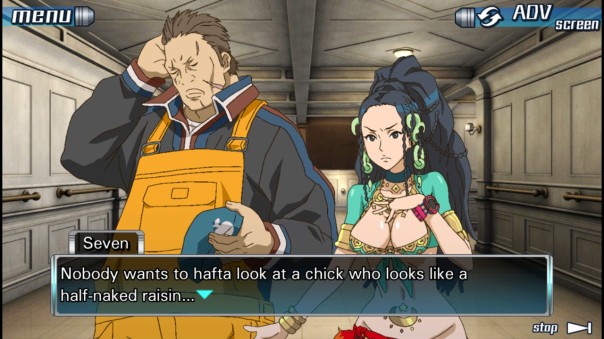