Thank You Nintendo for Providing A Review Copy of this Game

The Professor Layton franchise has managed to achieve consistency in quality ever since its first entry released ten years ago. Azran Legacy was the end of a very solid prequel trilogy, and here we are going forward with a brand new cast of characters. Does Lady Layton continue to provide an excellent Visual Novel and Puzzle game experience? There will be no major story spoilers in this review. 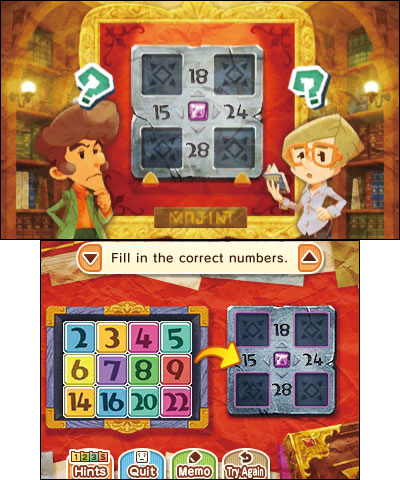 Many years after the events of Unwound Future at some point the good professor settled down, had a child, and just vanished. Katrielle Layton is at your service as a crime solver, and is just as big of a puzzle fanatic as her father. While she is fixing the sign of the agency she works at, a talking dog asks for her assistance. As nonsensical as that sounds, she brushes it off without a care. After solving a test puzzle she is deemed the “real deal,” and we find out this dog doesn’t remember who he is. The Lady is up to the task to figure it out, though she is curious about what happened to her father.

The story is as whimsical, and charming as expected from a game in this franchise. The writing is very good, though the slapstick humor involving the character Ernest does fall flat, and is seemingly undeserved. Katrielle Layton’s character may not be as charming as her father’s, but she is an enjoyable protagonist, and I was very much engaged in the experience. Though, the plot can be pretty predictable sometimes, even later in the  game. This can potentially make the game’s sense of mystery fall flat, but it will vary from player to player. However, I managed to enjoy the story regardless.

Puzzle solving is the franchise’s focus when it comes to the gameplay, but there is more to it than that. Just like previous entries there will be point, and click adventure gameplay where you talk to NPCs. You can find hint coins to help you get through tough puzzle, and some NPCs will have optional puzzles to solve themselves. This aspect of the game has always given it a Visual Novel feel, and managed to create a world you wouldn’t expect from a puzzle game. Thankfully, that has been realized once again, and only made me want to discover more about the world and citizens. This is tied around the enjoyable puzzle gameplay, while not having a great selection of brain teasers, it has some memorable puzzles. The very first puzzle in the game makes you think outside of the box, by using the box as a means to solve the puzzle. I was impressed with many others, and was constantly reminded of how much I over think to find solutions.

The Professor Layton art style didn’t really transition into 3D very well, the exaggerated character designs look very out of place to the properly proportioned cast. Lady Layton does not fix this issue, and can be very egregious at times. You’ll be treated to wonderful animated cut scenes, and that’s where the games character design direction fits. Thankfully, the soundtrack managed to stay consistent, giving that whimsical European vibe the franchise is known for. Lots of pianos, violins, even the accordion. Maybe it’s not as memorable as previous entries, but it did fit the mood and I hummed along during many instances throughout the story.

Overall, Lady Layton is another good entry in the franchise. It may not be as well written, but it’s another solid story, and a good casual friendly puzzle game. Fans won’t be disappointed. If Katrielle is the new puzzle fanatic we will see going forward, I’m all for it.

–Some character designs don’t work in 3D
–Predictable at times

Posted on December 3, 2017, in Reviews. Bookmark the permalink. Leave a comment.