There are very few franchises with the same consistency as Kirby. Though it may not be for everyone, every main series entry manages to engage its fans with a surprisingly deep power up system and simple level design. Does Star Allies manage to keep this formula fresh or is the gameplay starting to become stale? Aside from one returning mode, there will be no spoilers regarding the post-game content.

Metaknight and King Dedede are going through their daily routine as purple energy begins raining down the sky. Kirby, is sleeping as all of this happens, but a pink heart falls on him causing him to wake up to the horror that is King Dedede stealing all the food in Dreamland. Kirby sets off the stop this madness, only to find out that this purple energy is possessing residents of planet popstar and making them do bad deeds. The pink heart allows Kirby to sway some of his enemies to join him. With their help, Kirby sets off to stop this evil and save his home.

Story has never been the focus of the series, but optional logs that give background details have returned, offering more depth to the bosses, and the events that unfold in the main campaign. Some of which tying back to previous entries, deepening the lore of the franchise. This is always appreciated as it shows that this franchise isn’t just for kids, but also for the adults that have been around for many years. One piece of information will only be appreciated by those that are aware of the franchise’s most obscure details, which caused a jaw dropping moment.

Depth isn’t just found in the background details, but also the main focus of the gameplay: power ups. Anyone who has played Super Smash Brothers will have an easy time adjusting to this system. Kirby can dodge, and guard the same way he does in Smash. Every direction you press along with the attack button will cause a different move to happen with some moves requiring more than that. There are moves that can be used in sequence for a combo, allowing Kirby to plow through enemies like they are made out of wet paper. This power up system gives the player a satisfying feeling, making them feel powerful, and any opposition wouldn’t stand a chance. In Star Allies, you can add elemental effects to some power ups thanks to your teammates. For example, the sword power up can be infused with ice to cause explosive damage, freezing enemies in their tracks. Water can be fused with ice to send ice spears at a group of enemies. As cool as this is, it doesn’t apply to every power up, but doesn’t come close to the combination system of Kirby 64 and the Crystal Shards. It feels pretty limited, which is a shame because of the potential this system can have. The bright side is that there are almost thirty power ups here, so there is a lot of variety in what Kirby can do. 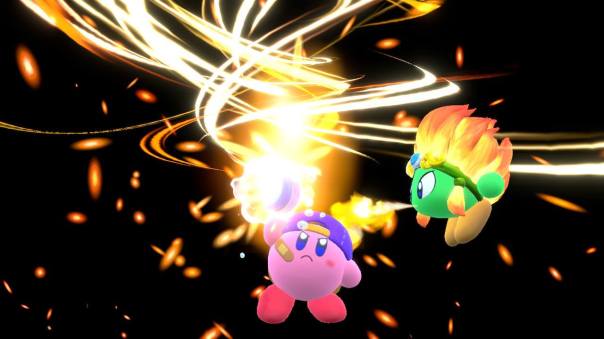 Befriending Kirby’s enemies is the main feature of this adventure. You’ll finally be able to have Chef Kawasaki cook the opposition and it is adorable. Your real friends can also jump in for some co-op play as the enemies you befriend. In fact, as you progress you’ll be able to unlock the ability to have Metaknight, King Dedede, and Bandanna Waddle dee join you, just like in 2011s Kirby’s Return to Dreamland. For this review a majority of the game was played with co-op, but a downside was discovered. With co-op, the game is one of the easiest entries in the franchise. Most bosses are a complete joke and Kirby’s lives will sky rocket very quickly. The Ai partners are also really smart, they will solve puzzles and defeat enemies with ease. They will play the game for you, and while it would’ve been annoying if they didn’t know what to do, they are just too good. It is entirely possible to play most of the game with just Kirby, but it will be impossible to 100% complete. If you want to have enemies join you but still want somewhat of a challenge, then only have one extra ally at a time, and more than one just for puzzles. A harder mode is not present in the game, so there is no alternative for a more fulfilling challenge. The series is known for being easy, but Star Allies is especially easy.

Levels don’t offer a lot of collectables anymore, there are puzzle pieces you can find that fill in art for players to view. Along with a larger piece that attributes to level completion, and a switch that unlocks bonus levels in each world. Sometimes these are hidden well, but others I found just powering through.

All of this may sound bad, and it certainly affected my enjoyment, but it was still a blast. Levels are so fun to run through and are as charming as ever. Co-op makes the game easy, but with friends it’s really enjoyable, and the game is definitely designed around it. As players cannot interfere with each other, and must worth together. It also offers a chaotic environment that comes with co-op, but feels very manageable. The varied character designs and sizes should be enough to stop players from losing track of themselves. There are also minigames that can be played with friends. There isn’t much to them, but completing every stage does go towards completion. There is chop champs where you have to cut down a tree as much as possible, without hitting the bugs. Then star slam heroes, where Kirby uses a baseball bat to send a meteor back to where it came. These are fun little distractions and they are worth playing at least once. Though of course, there is one returning mode that offers an insanely difficult challenge. True arena is back, re-named The Ultimate Choice, bringing with it a difficulty slider in the same vein as Smash Brothers and Kid Icarus Uprising. For those who want a challenge, bring it up to 9.0 and try not to damage your joy cons.

With the jump to Switch Star Allies looks absolutely breathtaking. It’s sharp, loaded with vibrant colors, and has great lighting. The details don’t just stop in textures, as there are so many call backs to previous entries, fans will just adore this game. However, it seems with all this detail framerate was sacrificed as the game is locked to thirty frames per second. This is very unfortunate as the 3DS titles ran at sixty, making the controls feel tighter in those games. The soundtrack is as energetic as ever, with Reef Resort being a track worth listening to. Along with that the sound affects really have a punch to them, which is satisfying.

Over all, Star Allies is a gorgeous entry in the franchise, the power up system continues to be engaging and the lore is just getting deeper. Some may feel that 60 dollars is steep for a game like this, but Star Allies offers a lot of content during the main game and post-game. If you try to 100% the game, you’ll get at least 20 hours out of it. While the game is easily the least challenging entry in a long time, it was still very enjoyable. 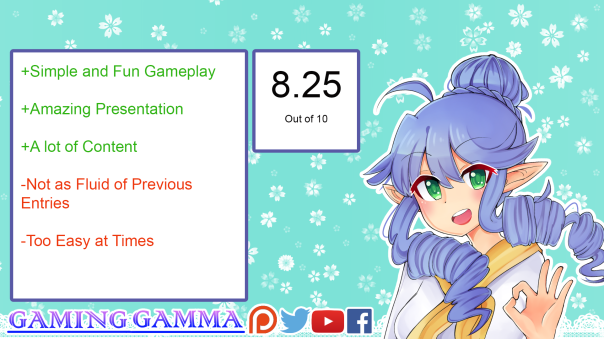 Posted on March 27, 2018, in Reviews. Bookmark the permalink. Leave a comment.