← Super Mario Maker 3DS Review
Yakuza 0 Review So You Want to be a Yakuza? →

Atelier Shallie Plus: Alchemists and the Dusk Sea is a game of dual protagonists where both main protagonists are, ironically, nicknamed Shallie. This game is the third and final game in the Dusk series. Of course, each entry in Atelier is represented as it’s own story that has previous characters from the concurrent series in it. So if you don’t want to go out and play previous entries in Dusk, that’s fine.

If one decides to play as Shallistera Argo, you play as the princess of Lugion Village. You’re on a trip to the oasis town, Stellard, with the hope that they would provide you with some water because the water in your home is drying up. Unfortunately that isn’t the case, as they’re having drought problems as well. But, after some pleading, Shallistera starts working for Stellard through their Union in order to get her village some water. On the flipside, you can play as the other protagonist, Shallotte Elminus, a citizen of Stellard. Unlike the quiet and shy Shallistera, Shallotte has a very rambunctious personality. Her main goal of the game is to get rich as well as becoming a better alchemist. She also works for Stellard’s union, but more as as their janitor, despite wanting more important work.

When playing as Shallie, there’s a lot to do. On the top left of the screen there’s an icon where the “Life Tasks” are located. There are five different types of Life Tasks. There’s one that focuses on the Mind, the Body, skills, other people, and the main tasks at hand. These tasks vary from helping out other people, defeating different types of monsters, synthesizing things using alchemy, and anything pertaining to the story path. Once all of the main tasks are done, you can proceed to the next chapter. Just remember though: once the main tasks are done, outside of simple fetch quests, Shallie won’t gain much from doing anything else until there are more main tasks to do. So do as much you can before doing all of the prerequisites for moving the main story.

Outside of Life Tasks to handle, there’s always work at the Union for you to do as well. These usually range from “can you give me X amount of Y; can you defeat X amount of this certain kind of monster” and so on. Doing these will fund your adventure so money is never an issue. Neither is the time you need to do them, as there are no time limits involved. You won’t run out either as they’re always randomly generated, and doing enough will make harder ones appear. 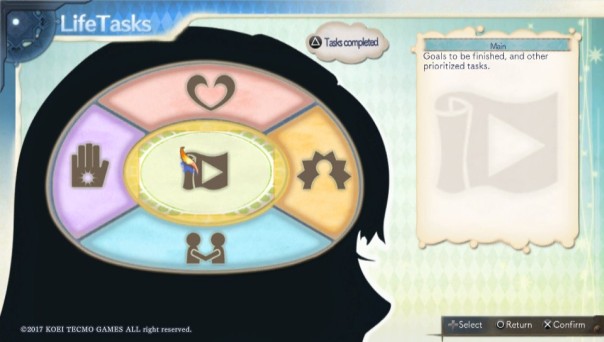 When out in the world, you simply choose where to go from anywhere that’s available to you on the map. Once you’ve done that, you can explore an area. In that area, you can gather herbs and all sorts of resources, battle monsters, and generally search the environment. When in an area with an enemy, you can hit them to start a battle, with a small advantage of going first. Battles themselves are pretty simplistic. It’s a turn based system in which you can attack, use skills, and use items. Continuously attacking the same enemy can potentially cause them to break. Once they’ve broken chances are they won’t be able to attack. Attacking enemies will also build up the burst meter, and once that’s reached 100%, damage dealt is increased, ultimate attacks can be performed, and so can combo assists. As far as assists go, there are generally two types; attack assists, where an ally attacks after you’ve taken a turn; and defensive assists, where someone takes damage in your place. If there’s anything to be wary of during battle, it would be that Shallie is in charge of items. 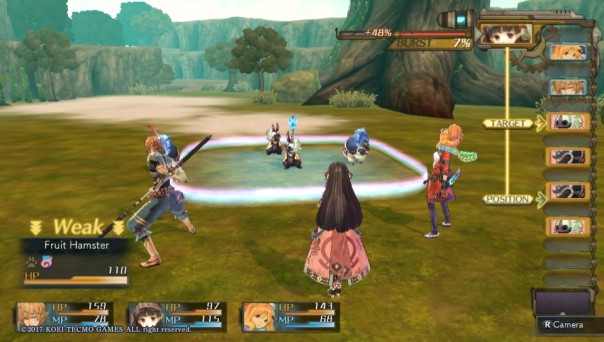 After a battle or after gathering an item, the field event gauge on the top of the screen will build up. Once it’s built up, you can use that to search for relics, battle powerful monsters, or get all of items in an area at once. However, you should actually be careful about how much you go harvest and defeat monsters because odds are you can affect an area to a point where an item may not come back. 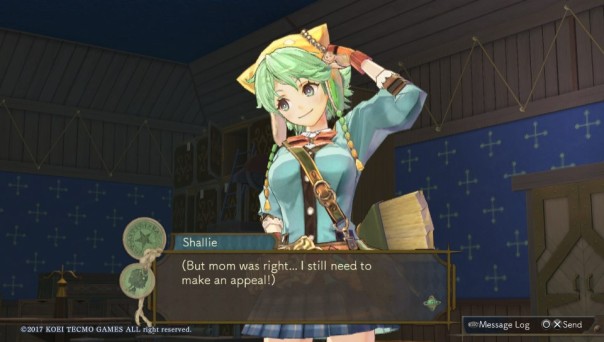 Once your done gathering up all of your new materials from going out in the world, it’s time to synthesize your items to make new ones. After all, you are an alchemist. As an alchemist, you can create health items, bombs, all sorts of accessories, and even materials so you can create other materials. All of the items you gather and create will have their own values associated with them as they can potentially have their own positive and negative values. You can try to increase these positives, negate the negatives, or do the complete opposite altogether if you need to by using your alchemist skills. The more items you synthesize, the higher your alchemist level increases, allowing you to create more complex items.

Atelier Shallie is a port of the original Atelier Shallie but with more content such as featuring Ayesha from Atelier Ayesha as well as Logy from Atelier Escha & Logy. This brings along new events to be explored. Naturally, all of the DLC from the game is included as well. As a port, the frame rate does dip a little at times, but it’s nothing too serious given that it’s a turn based game. If you’re not prepared, some battles can feel seemingly tough. Also, what makes up for the somewhat sluggish framerate is the fantastic music as well as the game’s art direction.

All-in-all, Atelier Shallie is a pretty solid game. Sure, choosing between Shallie, and Shallie seems like a pretty hard choice at first, but the game differentiates their stories just enough while making them intertwine; making it worth the two playthroughs. If there’s really anything to note is that you should always over-prepare; scout as much as you can so can learn as much can about your surrounding environments. You don’t want to be caught in a situation you weren’t ready for, but when you are ready, it’s incredibly easy to relax and practically waste away playing the game.

Posted on January 17, 2017, in Reviews. Bookmark the permalink. Leave a comment.

← Super Mario Maker 3DS Review
Yakuza 0 Review So You Want to be a Yakuza? →