Bomberman is making his return to dedicated gaming devices with a brand new entry that promises classic puzzle-action gameplay. Did it deliver? This game was tested with all of the control schemes, including the pro controller. 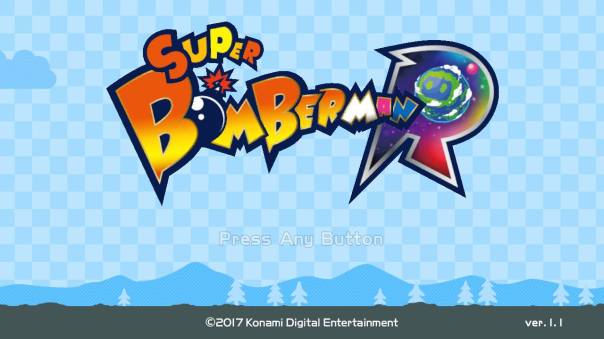 The story of “Super Bomberman R” is simplistic, and told like a Saturday morning cartoon. The evil Buggler and the five dastardly bombers plan to destroy the entire universe, and it’s up to the Bomberman bros. to stop them. Due to each Bomberman having their own personality, the group tends to clash more often than they work together. White is the leader type who just wants to do the job right, but his siblings have their own priorities. Red just wants to blow everything up, while black is too self-absorbed to care. It’s very silly and managed to get a few chuckles out of me, but it can be pretty cringe inducing, especially since the voice acting is not particularly great, but manages to achieve what the story is trying to convey. The story may not be the focus of the game, but it was enjoyable for what it was.

Bomberman is a puzzle-action game that has a level based structure. Each level has its own mission that needs to be completed to move on. These missions can range from defeating all enemies, or finding keys to unlock the level goal. There isn’t a lot of variety when it comes to missions, but even the same missions play completely different, and this is thanks to the maze-like level design. The puzzle gameplay comes from how you plan to complete each level as there are multiple ways of completing them. You can be reckless, or you can carefully plan by watching enemy movement patterns. Your plan can potentially even change while going through a world as your stats increase via power ups found by bombing obstacles. These power-ups can increase a Bomberman’s speed or allow them to drop more bombs to trap enemies for easy kills. This can be very helpful as their only method of attacking is placing a bomb where they stand. Be careful, though, as you can blow yourself up if you’re caught in the radius of your bombs explosion. 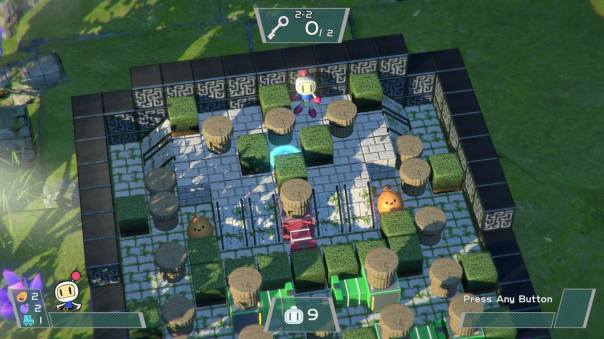 The game can be quite challenging and really punishes players for a complete gameover. You’re given a set amount of lives throughout each world and the bomberman bros. can only take one hit before a live is lost. If you reach game over, you can spend in-game currency to revive with all lives and power ups you have obtained. Each difficulty greatly increases the amount of money you could spend. When you run out of money and game-over, you are forced to return to the beginning of that world and try again, but with even less of a chance since all your money is gone. The only way to earn money is to complete worlds in story mode; lower difficulties will earn you very little, while higher ones will reward you with much more.

Boss battles have two phases, with one being where you fight one on one with a dastardly bomber, and one where you fight in an open arena against a big machine. The “dastardly bomber” fights are uninspired, as each bomber is beaten easily by using the same strategy. On the other hand, the fights with a giant machine piloted by the bomber of that world are really fun, and offer some intense moments to keep you on your toes. These are some of the best moments story mode can offer. The story mode can also be played co-op with a friend locally, which can change the entire game in terms of strategy and pace.

The game is packed with content aside from story mode. You can battle up to eight friends locally and online in twenty different arenas for some hectic multiplayer action, and it is a blast.  In story mode each person only has one life, but when you’re knocked out, you get to mess with your friends by launching bombs in the arena, and under certain conditions, you could even be allowed to return to the game. I really like this feature because these games can go on for a while and it allows defeated players to still be a part of the game even though they may not win in the end. It is also very cathartic to get revenge on the person who knocked you out. Using money you earn in story mode, you unlock twelve of the multiplayer arenas via a shop. You can also accessorize your characters with hats to add more personality to your preferred bomber. While no personal issues with the online multiplayer were found during tests, many players have been experiencing connectivity issues, so keep that in mind. Visually the game is really simple and is no way an example of what the switch can do. This also makes me wonder why the game is locked at thirty frames per second, and not able to grow to sixty. The simple visuals still look nice and are sharp thanks to the game being 1080p native, and the music is very energetic, matching the fast paced gameplay. World two has a very relaxing oriental theme that makes me want to add to the growing playlist on my cell phone.

Overall, Bomberman fans are going to enjoy this entry. It is everything a fan could want out of the game, and while it is an incredibly safe attempt, it was still enjoyable. This is definitely a game to keep an eye on when buying a Nintendo Switch. All control schemes worked perfectly fine for the game, but the pro controller was definitely the preferred way to play.

+Multiplayer is a Blast

Posted on March 10, 2017, in Reviews. Bookmark the permalink. Leave a comment.