Thank you XSEED for providing a review copy of this game.

“Story of Seasons: Trio of Towns” is the latest game in the long running Story of Seasons series, (formerly known as Harvest Moon,) and is the game that celebrates the series’ 20th Anniversary. As such, this game represents twenty years of progress in the series, and where the series has come since its inception on the Super Nintendo. Thankfully, it seems that Marvelous have delivered us a game that long time fans of the series will be able to enjoy.

Trio of Towns starts out with your discussion with your parents and sister about moving again due to your father’s work. Being fed up with always moving because of his job, you declare that you would rather become a farmer, and strike it out on your own. Your father is completely against the idea and thinks it’s foolish for you to make such a rash decision, but reluctantly agrees to let you set out on your own to start your farm (if only to use this as a learning experience to prove that he was right about you.) So, you set off to see your Uncle Frank and begin your new life at the crossroad of a Trio of Towns.

Previous Story of Season titles have always had an issue with starting the game, since you are normally flooded with tutorials that make starting these games a bit of a chore. Thankfully, it seems like Marvelous has finally found the right balance for tutorials compared to previous games. Instead of day after day of unskippable tutorials, this game manages to spread them out a bit more, and they don’t impede on your progress through the game at the start either. The best part about the tutorials is that when your Uncle Frank gives you some, he will give you a basic rundown of how a mechanic works, but won’t go into much detail and will let you “ask him any questions you may have.” So long time players can completely skip most of the tutorials, and newer players can ask as many questions as they need to to understand the mechanics. This change to how the tutorial works makes the games start feel a lot smoother and feels like you can start making progress on your farm a lot faster.

Next, I would like to discuss the actual farming in this game. Farming more or less has remained the same since the previous Story of Seasons game, with the exception that you only have your farm and there are no longer any conquests or rivals to fight for farmland over. While it is a bit of a bummer that they’ve removed the in-game mechanic of specific fields that allow for better crops to grow, I feel like the farm space you eventually end up getting more than compensates for this. Everything is still held to one button presses to do your farm work. When you hold a hoe and want to till the area around you, you just hold the a button, same with watering crops and harvesting them. I feel like the act of farming in this game has hit a point of where “if it isn’t broken, don’t fix it.” The farming is very intuitive, easy to grasp, and is easy to learn about how to create better crops through the use of different fertilizers. Its neither too dumbed down where people will find it boring, nor too overcomplicated to not get an understanding for it.

Raising animals in this game is just as simple as well. It’s your job to make sure your animals are happy so they can provide you with goods to sell. You can raise a variety of different animals from cows and alpacas to chickens and quails. Keeping your animals happy is simple enough as well. Make sure you take the time to clean them, let them out to graze, and most importantly feed them! 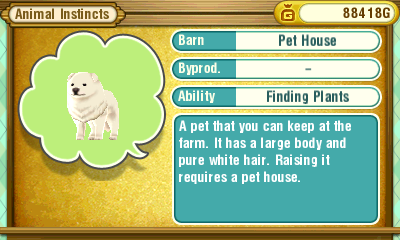 Thankfully this game lets you stockpile a lot of feed for your animals to eat, so you don’t have to constantly put out fresh food for them. The only downside I can think of to raising animals is the fact that your starting barn and chicken coop can only house one animal each, with the upgraded ones only being able to hold three. I don’t understand the reason behind this and it feels like a step backwards, mainly because in every previous game when you get your first barn they can hold a numerous amount of animals. That said, when your farm begins to grow you can start placing more and more barns around to house more animals, but it just seems like unnecessary clutter.

Next, let’s talk about the tools of your trade. You have various tools at your disposal, but they can take up quite a bit of stamina to use, perhaps a bit too much if you are playing on Veteran difficulty. Unlike previous games where you do simple upgrades on your tools, you actually upgrade the different attributes of your tools instead. So if you want you can focus on upgrading the effectiveness of your tools so they can be more powerful, or put your time in upgrading their weight so you use less stamina when using the tools. This lets you customize your tools in the way you want to use them. Granted, this isn’t without its drawbacks. To upgrade your tools, you need to forage for materials in the mines of Westtown. But the issue with that is that the materials you get out of those mines are completely random, and the game will actively discourage you from mining daily, as the longer you go without mining the less likely you are to get rarer ores. This became a bit of a hassle because I would go almost an entire season without getting enough materials to get what I needed. Thankfully, there is a material salesman who will sell you certain materials to make this headache a little less cumbersome.

That really takes care of it for the farming part of the game. The series has really come a long way since its inception, and as the series began to grow, your farm only became part of the gameplay. This game is called Trio of Towns after all, and your farm lies at the crossroads of them. This game holds three distinct towns, each one big enough to be their own town in a separate Story of Seasons game, with their own culture, festivals and wide cast of people to befriend.

Trio of Towns has you befriend the residents of Westtown, Tsuyakusu, and Lulukoko. A Midwestern type town, a traditional Japanese town and a tropical town. Each town has a vast variety of people to befriend, and each town has an overall friendship level known as Town Links which you can raise to unlock more things in the towns for them to sell to you. This right here makes the townsfolk in this game stand out more from recent games. Town Links are increased the more you befriend a town’s villagers, shop there, ship them crops or do part time jobs for them. This mechanic here gives you a much higher incentive to go out and get to know each person in all of the towns. 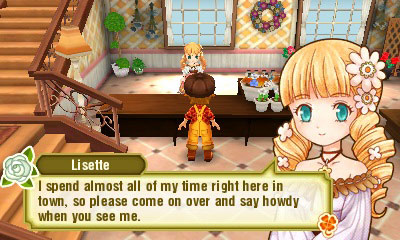 Each villager, whether you can marry them or not, have their own friendship events. These are five to seven minute cutscenes you can unlock when befriending villagers, and these scenes gives a look more into a villagers character. Each friendship event you go through also involves other villagers as well, and sometimes a group of friends can have their own saga you can explore while getting to know them. At times I truly felt like I was being accepted into a circle of friends, and I loved it. The marriage candidates are also really fleshed out as well, and aren’t two dimensional like some were in previous games. Each one has their own secrets they are hiding that you only get to discover through befriending them.

On a final note, Trio of Towns is also a very visually appealing game on the 3DS. Each of the three towns all have their own distinct look and feels refreshing whenever you visit one after spending a long period of time in another. The part time jobs really let you get the leg out and explore these towns as you deliver things for people across these three towns. The only issue I noticed were some frame drops here and there on the farm when a lot of things were on screen, but it was nothing too bad that broke my time in the game.

At the end of the day “Story of Seasons: Trio of Towns” is a marvelous game to celebrate the series 20th anniversary, and truly exceeded all my expectations. The game also has a lot of call backs to earlier Harvest Moon games from the flashback scene at the beginning being reminiscent to Friends of Mineral Town, to the plot paralleling Harvest Moon 64 and Back to Nature to Harvest Moon DS’s main theme being remixed and used for festivals, the game is just filled with nods to earlier games in the series. Long time fans will truly get a lot out of this game, and for newcomers I can easily recommend this game to you if you want to dive into the series for the first time.This game is easily one of the best games in the series to date.