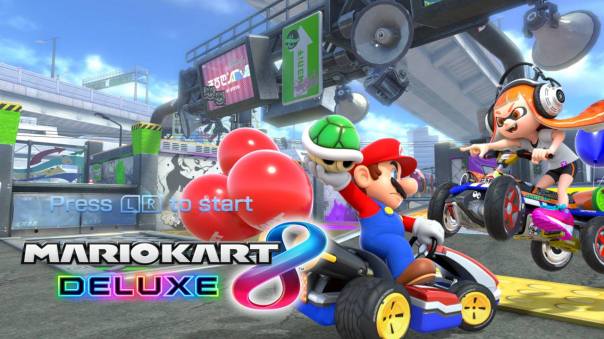 Mario Kart 8 was one of the first must have games on Wii U during the first half of the systems’ life cycle but there was always something missing that Mario Kart 8 Deluxe manages to fill with the revamped Battle Mode. Content additions weren’t the only focus of the game as Mario Kart Deluxe features native 1080p visuals at 60 frames per second for a sharper experience that feels good to play. From Joycons on their side to the preferred pro controller, Mario Kart 8 Deluxe offers one of the most diverse control schemes in any multiplayer game out there. This is, of course, on top of being one of the best racing game or party game experiences out there.
As always, the track design is outstanding and offers so many hidden details that add a sense of world building making the experience feel like a racing game set in the Mario World, rather than a racing game with Mario characters and some guests from other Nintendo franchises. Due to the appearance of Link, Isabelle, and the Inklings from Splatoon it almost feels like the game is trying to step away from the “Mario Kart” branding; but I doubt many would object if other characters manage to make their way into the franchise for the sake of variety. 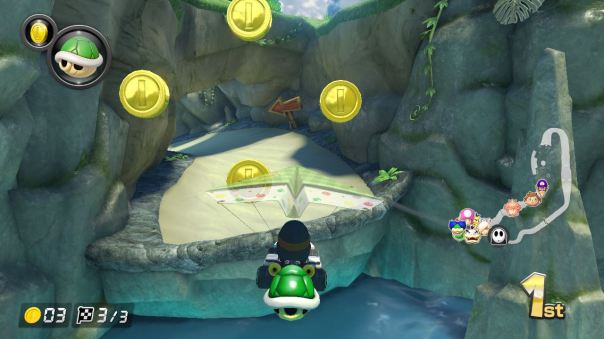 The original release contained thirty-six playable characters, but seven of those characters were the Koopalings and that made the roster feel padded out compared to other entries where characters such as Diddy Kong and Petey Piranha were playable. In Deluxe there are over forty-two playable characters (unless you count Bowser Junior as a Koopaling,) making the roster will feel much more varied. The addition of King Boo in particular was the favorable choice due to how different he looks compared to the rest of the cast.

Battle Mode is the biggest addition to the remaster. In the Balloon Battle mode, two to twelve players battle it out in arena to score the most points and achieve victory under the allotted time given. There are many returning modes such as “Shine Thief,” where players have to try to hold onto the shine sprite until the time runs out to achieve victory; “Coin Runners” where players collect and steal coins from each other to achieve victory; and “Bob-omb Blast,” where there are explosions everywhere. There is a brand new mode in the form of “Renegade Runners,” which is essentially cops and robbers with Piranha Plants. The cops send the opponents to jail and the opponents can try to break free until no one remains. This new mode was probably the highlight of this new battle mode due to the excitement that can be had with a group friends. 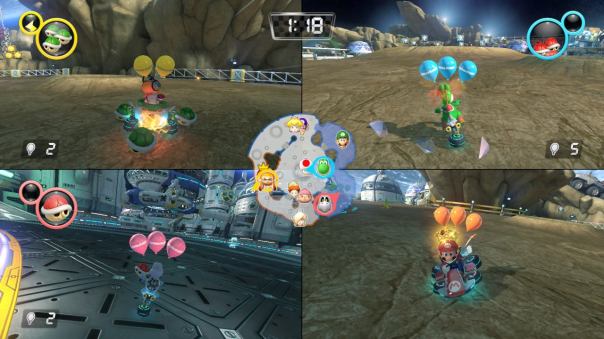 All modes including the races can be played online with a very good experience. Every match tested was lag free and may just be one of the best online experiences Nintendo has ever created. Even with subtle changes such as allowing characters and kart changing between matches makes it a much smoother experience than the 2014 release. However, on the flip side, as a modern game it lacks various features such as voice chat and messaging making it too simple of an interface. This is a problem with the Nintendo Switch in general and, unfortunately, Mario Kart 8 Deluxe is bogged down by this. 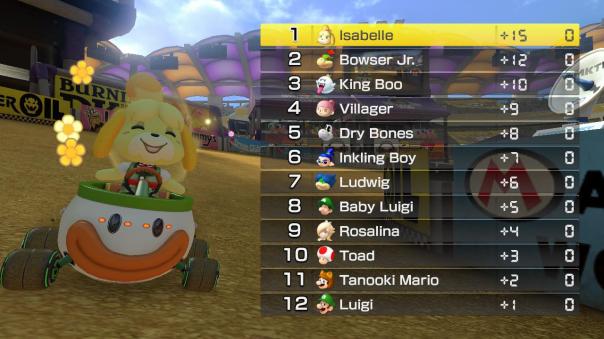 -Online interface issues have not been addressed

Posted on May 1, 2017, in Reviews. Bookmark the permalink. Leave a comment.