Miitopia Review You Call this a Utopia?!

A Review Copy Was Provided by Nintendo

Miitopia is the latest game in the “Mii” series of video games and is one of the first ones to get its own standalone release. Miitopia seems to be an extension of the Mii Plaza game “Find Me” in terms of concept. So how does this game fair now that it was able to be fully fleshed out with its own kind of campaign? Well, the answer to that question may not be what you think, so let’s take a look into Miitopia.

The whole story behind Miitopia is that the Dark Lord is going around Miitopia and stealing the faces of its inhabitants and placing them on random monsters, this is where an adventurer, you the player, must take up arms and take action against the Dark Lord. I think the best thing about this story is that games entire cast is made up of Miis, from the Dark Lord to your party members to random citizens of Miitopia, they are all Miis you can create or pull from an online pool. It’s here that gives the game a sense of personality, as you can create your own adventure with these presets. Want to save the land of Miitopia from your tyrannical boss with a troop of your co-workers and friends? Well, This game lets you do that! While the concept is indeed novel, it is still rather enjoyable, and the writing of the Mii’s is humorous as usual.

Speaking of the Mii’s, like in Tomodachi Life, your party members have the ability to grow and become friends. If you room them together in the Inn, or if they help each other in battle, or interact in a cutscene they will become closer together. Doing this allows them to perform special moves in battle, and depending on how great of friends you guys are you can perform some pretty awesome combos on enemies. This is where most of the games strategy would come in, team up party members that had the best chemistry and find the right classes that complement the battle. Also, many of the scenes were pretty funny at times, and I would be lying if the game didn’t make me smile from time to time when I realized me and all of my friends were on a bit of an adventure, similar to the ones I would imagine when I was younger. Sadly this is about where my praise for the game ends.

The gameplay of Miitopia is that of a class turn based JRPG. When you create your party members you can select one of many personalities and classes to pick from. Each class has their own skillset, while each personality trait has their own different battle quirks. They offer quite a bit of variety in the gameplay. In theory at least. 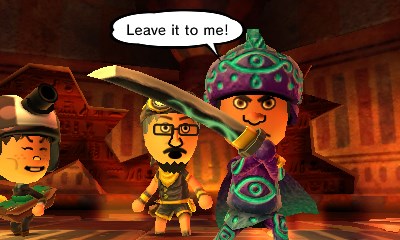 The problem with this is that you can only control your main Mii, the other ones you are left at the mercy of the AI. What I can say is that the AI in this game is somewhat smart, but it’s still not ideal that you are unable to have control of your party. There were many times a battle would have gone better if I were able to use everyone’s moves differently. That said, the combat at the end of the day is really simple, and can even be dull at times, it often felt like the game was playing itself with little input from me.

The next bit of gameplay is the real deal breaker for me. Miitopia has an overworld similar to that of most 2D Mario games. You have an overworld with many different “levels” to explore. And I use the term “levels” very loosely. All you are really doing is moving from the left side of the screen to the right until you reach an inn. You do this for the majority of the levels in this game. With the only real gameplay mix ups being choosing where to go at a fork in the road, random battles or random events. This makes the game feel like it’s more of a grind than anything else. 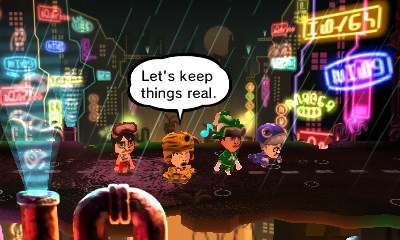 It actually gives the feeling that this game lacks any real gameplay.  While the cutscenes are humorous, they don’t really do the job when you are just trying to make your way out of an area to get to the next. This also doesn’t help with areas with branching paths, so you will have to “clear” them multiple times.

I am not sure why the game chooses to go this route. It honestly baffles me because the entire time I play this game I feel like I am not really playing the game, I am just watching the game. You can just hold down the B button and speed things up, but that just makes the feeling worse. I could forgive this if the combat had more depth to it, but because you have to rely so much on the AI to get things going, a lot of strategy goes out the window. Sure later in the game, you will have the ability to use a lot more complex skills, and different friend combos, but due to the combats situation you can’t really explore things to their most potential. I could have even forgiven this combat situation if there was more to do in the overworld. Sure there are special events like quiz shows and playing rock paper scissors, but that didn’t really do much. Even the side stuff just isn’t interesting enough to get invested into it.

Another issue to drive home about this game is the sheer amount of RNG involved with what happens in this game. An example of this would be, in one fight, a boss was a painting, and if my party member were to attack it, they would randomly stop to “admire” it, and the painting would attack to cause damage.

This happened several times in a row and due to this, we lost the fight, horribly. Another example is if you want to try and buy gear for your Mii’s they will sometimes not even buy the right gear but instead come back with a banana. That wouldn’t be an issue if it wasn’t for the fact that the item you wanted to appear again is also random. There were just so many things in this game that just boiled down to poor RNG that grinding through more of the game just became so much of a chore.

Visually, and with the games soundtrack, they are both honestly forgettable. The art style is in line with the many street pass games and Tomodachi life. It’s very simple, but it doesn’t do anything to truly make it stand out. The music in this game is also pretty bland with only a few tracks that actually stood out. Music in a JRPG can make or break an experience with everything happening, and this games score really missed the mark.

At the end of the day, Miitopia really is a letdown. It tries to bridge Tomodachi Life and the JRPG genre, but without adding anything that would make the gameplay endearing. I could only recommend this game to someone who is looking for a quick pick up and play game for short play sessions but doesn’t want to get invested in a extremely in-depth JRPG. That said, at the $39.99 price tag, it is even hard to recommend even that. There are quite a few games on the 3DS already that can act as a gateway to the JRPG genre for a fraction of the cost.

+Quirky use of Mii’s

+Go on an Adventure with your Friends

-The Game Plays itself