Thank You Idea Factory International for a Review Copy of this Game.

Cyberdimension Neptunia 4 Goddesses Online is the latest spin off in the Hyperdimension Neptunia series. Wow, I feel like I say that sentence a lot when reviewing these games. This game marks the first spin off Neptunia game on the PlayStation 4 over the PlayStation Vita, and for good reason to. This is also the first game in the series to make use of Unreal Engine 4.The amount of detail in the visuals shows. So how does this spin off hold up to the other ones?

The Hyperdimension Neptunia series is best known for parodying the JRPG genre, and delves into parodying other genres in its many spin off titles. This time around the game takes a stab at parodying the MMO genre. The CPU’s of gamindustri are invited to beta test the in game MMORPG 4 Goddesses Online, the latest installment in a popular in universe MMO series. The purpose of this “in-game game” is to resurrect the four goddesses with the sacred treasures before the evil demon king can use the treasures for evil. 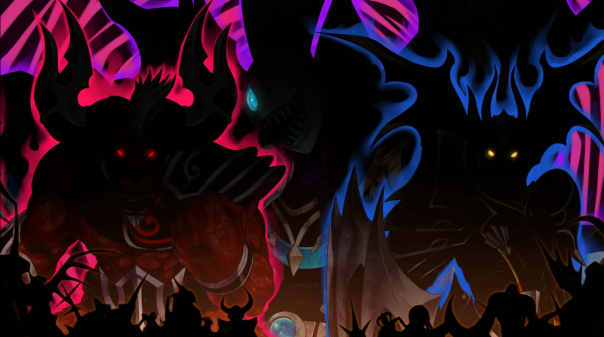 I don’t know what it is about Compile Heart lately, but their writing has been on point. 4GO’s writing is probably some of the funniest in the series to date. While the main story itself is nothing too special, the writing and all of the interactions between characters is enjoyable. Since the game is taken from the perspective of people playing an MMO, it leads to a lot of writing that parodies a lot of things you’d see while playing online. I would often find myself reading through every optional scene because of how much I enjoyed the writing and the interaction between the characters. Since this is the first game in which the CPU’s are not being rivals, but instead working together from the start, it has a much more charming atmosphere to it, and you get to see how they treat each other behind the scenes differently from the normal games. 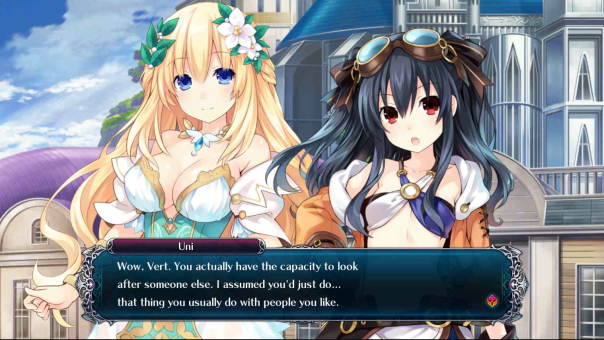 Gameplay wise, 4GO plays much like the other Tamsoft made Neptunia games. It’s a hack ‘n’ slash game where you have to go through hordes of different enemies. However, the only different thing is, the game is broken into different dungeons similar to that of the mainline series as opposed to separate levels that you progress through the story. Like an MMO, you take on several different quests from the guild and you have to explore the many different dungeons to fulfill the objectives.

Each of the characters you play as have different abilities similar to that you would find in any MMOs. You have your healer class, tank class, rogue class and many more to follow. When playing offline, it’s best to find the right combination of classes to suit the situation at hand. Now onto combat: The combat in this game is pretty simple. You press the x button to perform standard attacks, you can press the right trigger to guard against enemy attacks, and if you manage to guard with correct timing you can perform a parry and take no damage. Parrying comes in handy quite often, and more so against boss monsters, so be sure to learn a monsters attack pattern so you know the best time to guard. You also have many different special attacks that can add attributes to your party’s attacks or perform special moves. You even have a special meter that you can build up to do massive damage, similar to exe moves. The game’s combat overall is a massive improvement over that of MegaTagmension Blanc and Action U, as the inclusion of specialized classes adds a lot more variety for people to try and leads to a ton of potential play styles for people to use.

When it comes to the AI of this game, it is pretty good in most situations. You have the ability to set your AI to many different settings to best suit the battle at hand. If you are in a tight spot and want to make sure everyone makes it through, you can always tell your party to defend themselves. Or if you want, you can tell the party to act like how they would based on their personality. There are many different settings for you to pick from depending on the situation, which is good and made up for when I was playing online. I should mention that Blanc is a really good healer, because man if you go down you have to start the entire dungeon all over again.

The online aspect of the game is similar to that of Megatagmension Blanc. However, this time around you can create or join a guild of other players to do guild quests online. This more or less plays the same as you would in single player, but instead of having AI’s to control you have other players. To be honest, the online can be a lot of fun, and at times feels like it’s an actual MMO.

Another thing that I really enjoy in 4GO is the amount of customization that you have in this game. There are many ways to make things your own, such as how your party looks, what kind of gear you use, to how your party acts in battle. It’s these things that really drive the MMO aspect home, and oddly makes me wish this game was a full out MMORPG in the same vain as RuneScape or Final Fantasy XIV. That said, this game really does get the MMO points down and goes a long way in adding charm to this game. 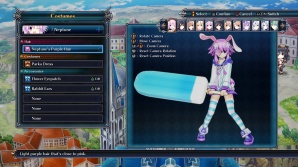 Visually, 4GO is a real treat to look at, the many different dungeons designs are very unique and filled with life, and creates a visually good looking experience all around. This is a massive step in the right direction for the series, as previous entries normally had a habit of reusing old dungeons to pad things out, this time around all of the dungeons look and feel unique, and feel like places I would see in an actual MMO. The soundtrack for this game is something special as well. The many different tracks fit every world and event, and are just really good to listen to. By far this game may have the best OST in the series as none of the tracks feel samey or feel like they were cut from the same cloth.

The only downside to this game’s presentation is the constant frame rate dips. Even using the PlayStation 4 Pro, I noticed quite a bit of slowdown in some area when a lot of monsters are on screen, or when there were many different particle effects going off, or if a boss was using a special move. While still playable, these frame dips really took me out of the otherwise fast paced action. Another performance problem I noticed were a few bugs in the game. An example of these would be when fighting a boss a boss managed to phase out of the map and then teleported to another random spot in the arena. I have heard of people experiencing game crashing bugs, but thankfully I have yet to run into any of these myself. The final issue I had with this game is the fact you are unable to actually pause the game. Yes, I know they were going for the MMO feeling of “you can’t pause an online game”, but when playing offline you should be able to pause the game. This gets more annoying with how many menus you have to shift through at times when trying to either switch out party members or just trying to find your current quest objective.

Overall, Cyberdimension Neptunia 4 Goddesses Online is everything an online Neptunia game should be. The game has creative writing, an enjoyable combat system, and fantastic visuals to boot. The only thing really holding this game back is the amount of performance issues tied to this game. Outside of that, you have a really enjoyable spin off of a loveable series. If this game is going to set the groundwork for how future games look and feel, I am excited to see what the future holds for the Hyperdimension Neptunia series.

Posted on October 9, 2017, in Reviews. Bookmark the permalink. Leave a comment.