A review copy and screenshots have been provided by Atlus USA

END_OF_DOCUMENT_TOKEN_TO_BE_REPLACED

About a week ago, in my write-up Thoughts on a Demo- Stella Glow, I wasn’t sure how Stella Glow would turn out because the demo didn’t leave me much to say in terms its battles. However, after about 4 chapters and 17 hours of play, I have to say that this game has met my expectations. The story isn’t anything special and is pretty run of the mill, but it doesn’t bring down the game at all. The characters keep me coming back to this game as they’re all very enjoyable. The battles, while still overall pretty easy are pretty fun to play.

So far, the story hasn’t necessarily done anything unique to sink me into it. The broad overview is that, for some reason, Hilda is bent on crystallizing the world. In order to stop this, Queen Anastasia has ordered her knights to find the Earth Witch, Fire Witch, Water Witch and Wind Witch. This is due to the fact that their powers combined can defeat Hilda. Along the way, they pick up Alto and his friend – just turned Witch, Lissette. All-in-all, the story is nothing amazing. But it’s not boring either. No real twists or any foreshadowing for later in the game. It just feels “standard” for lack of a better word. If anything, there was one interesting turn early on in the game that might have made the game a bit more grim or at least darker in terms of overall scale had that mood been kept throughout the game. But that was just an early chapter. Nothing more.

The characters that hold this story together aren’t necessarily the most unique or special, but they certainly have great qualities to them and mold together very well creating a fun cast. Look at Archibald for example. He’s the most serious of the knights and comes from a long line of honorable blacksmiths. However, during his bonding events, we find out he has an arranged marriage. Believe me when I say that while he’s one of the best in battle, him on a one-on-one conversation is absolutely horrible. I almost felt bad for the girl he had to meet. Constant stuttering, indecisiveness – it’s just a bad time for who has to date him. Naturally, you have someone in the exact opposite camp than him like Rusty, for example. He’s a real ladies man. Never too serious or one to want any responsibilities or deal with children really. He’s just incredibly laid back. So laid back that he’s actually the one who takes you to the tavern for the first time too despite not being old enough to drink. At the end of the day, he’s just a down to earth kind of guy. There are some other people in your party as well like Klaus and the other witches but those two just go with each other so perfectly, that it was immediately noticed.

The only thing so far that’s slightly disappointing are the battles. Don’t get me wrong, the game is very fun. I love SRPGs due of the depth and strategy they provide. This one however, is just straight forward and very simple. The only way to make it difficult is to try and beat each mission under the special conditions they give. Even then, it’s still pretty easy due to the use of songs. What makes Witches special is that they’re the only ones in the world that can sing and that transfers over to gameplay. When Popo sings for example, the opponent can’t attack for two turns. After the first turn of the song has passed, the opponents then have their defense lowered making the whole thing a huge game changer unless the opponent is the type to not be affected by status effects. Luckily, you can’t outright abuse these as they are pretty costly. This example in particular costs four PP. PP can be gained when you do damage to an opponent, you defeat an opponent, an opponent defeats you, and so on. So while battles aren’t necessarily the most balanced thing in the world and are very much in your favor, it’s nothing terrible or even bad. The only real complaint I have is that it’s just too easy.

For Imageepoch’s swan song, I’d say that they a pretty great job. How great? Well, if you want my full thoughts, wait until November 14th for the full review. But, if you couldn’t tell already, I enjoy this game a bit. While nothing in particular stands out on its own, it’s how it all comes together that makes this game worthwhile.

END_OF_DOCUMENT_TOKEN_TO_BE_REPLACED 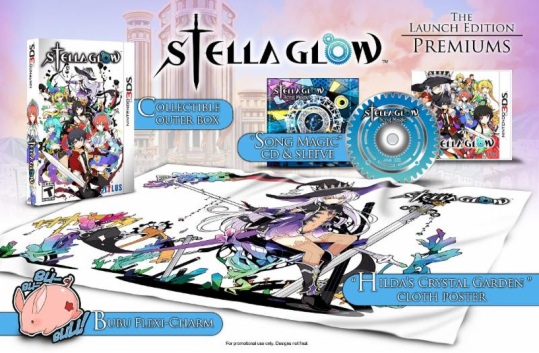 The Limited edition comes with Hilda’s Crystal Garden Cloth Poster, Bubu Flexi-Charm, “Song Magic” CD and a Collectible Outer Box. A nice amount of cool trinkets to go with this game when it comes out!