This year marks the 20th anniversary for the Story of Seasons/Harvest Moon, and what better way to celebrate it by having a new entry in the series! Checkout some of the latest screenshots of Story of Seasons Good Friends of Three Villages brought to us by the latest issue of Famitsu. 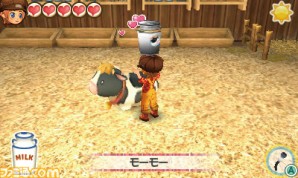 Story of Seasons Good Friends of Three Villages will be launching in Japan in the next few months. No word from XSEED yet on when we can expect to see the game in the states, but hopefully the good sales of the most recent Story of Seasons game will encourage priority of this game!

Disclaimer: Story of Seasons is the life/farming simulator known as Bokujō Monogatari in Japan, the series was rebranded from Harvest Moon to Story of Seasons in 2014 when Marvelous AQL acquired XSEED Games and shifted localization from Natsume to XSEED.

Posted on January 13, 2016, in Reviews. Bookmark the permalink. Leave a comment.