Why to keep Tokyo Mirage Sessions on Your Radar 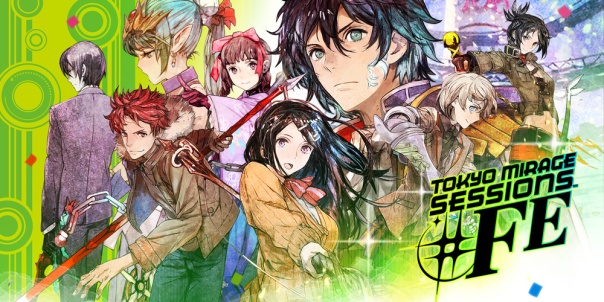 *Editor’s note: This is based off of my time playing the Japanese version of the game.

If someone were to ask me who are my favorite video game developers of all time, two of the ones near the top of the list would have to be any of the many teams currently at Nintendo, and Atlus. Let me give you some backstory on how I grew to love Atlus; I honestly never heard much about Atlus, nor had I played an Atlus game (I’m not counting the impulse buy that was Conception II) until I saw the official announcement trailer for this game when it was under the name of Shin Megami Tensei X Fire Emblem.

Now, thanks to this, Etrian Odyssey, Persona and Shin Megami Tensei have become some of my favorite series of all time. The more I delved into Atlus’ diverse library of games the more I fell in love with the idea of this crossover. However, when Nintendo went dark on the game for almost an entire year, I expected the worst: that the Fire Emblem series and the Megami Tensei series were too incompatible for a crossover.

That all changed when Nintendo showed the first trailer for the game during a Nintendo Direct. At first, I had no clue what the game was. But I said to myself: “Whatever this is I love it!” Low and behold, it was the crossover game that got me into Atlus games. The reception to the outcome of this game was mixed at best. And I will be the first to admit if you prefer traditional Shin Megami Tensei games and Fire Emblem, this game wasn’t going to be for you. If you are a person who prefers Persona and Fire Emblem Awakening, then this game is more likely to be up your ally. Thankfully, for me, I was the kind of person who grew to like Persona (specifically 3 and 4) and loved Fire Emblem Awakening. So I was never really on that bus of people who felt betrayed by having their expectations very high of a game that never had development fully started really high. 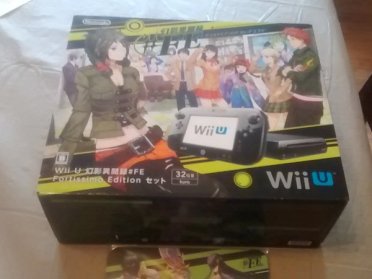 So the moment I saw the Japanese Wii U bundle I pre-ordered it (I am minoring in Japanese so I thought it would be a great educational investment). I have put in about 12 hours into the game, translating it to the best of my ability as I go along, and all I can say is that this game is truly fantastic.

While I cannot speak much on the game’s story due to my limited ability of translating (Outside of the fact that Fire Emblem characters are mirages and you’re following around a group of Idols), I can speak in great detail about the gameplay itself.

While the game seems to have strayed far away from that of a story based crossover, it is indeed a gameplay crossover. The game’s combat is taken straight of the Shin Megami Tensei textbook, while incorporating the class battle system of the Fire Emblem series. The mix works extremely well and provides for some interesting combat choices. In fights, you have to keep experimenting to find what an enemy’s weakness is and do your best to exploit it, the game also uses the follow up attack system from Persona in which (depending on your party set up) your teammates can perform follow up attacks against enemies for extra damage.

Keeping things in the veins of Persona, the Fire Emblem characters, known as mirages, act a bit like your character’s Persona, such that they can be used for special attacks and skills in battle. The combat in this game feels really woven together, and I often found myself not being bothered too much if I had to grind for levels because I was able to try out new combinations in battle I could use in later boss fights. I guess I can talk about the next thing I really enjoy about this game so far: the game’s scenery and atmosphere.

The game’s art design and sound design, in my opinion, is some of the best I have played in a game to date. The visuals are extremely gorgeous and put so much life in everything around you. 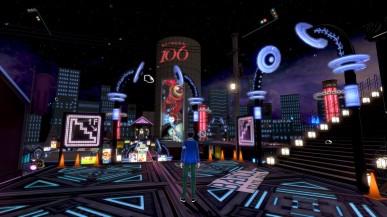 Each dungeon has its own theme and puzzles that you need to solve to progress through them, and the enemies in each dungeon seem to be vibrant and full of life, especially the boss monsters. In fact, it’s not just the boss monsters, the entire game’s cast is full of life and energy, well almost the entire cast, I can’t get a good read on the main character, he just seems like your generic anime protagonist #160915. Maybe his character will evolve more as I progress the story but where I am at now he is very bland. But I can currently overlook that at the moment due to this game’s awesome soundtrack. The game takes the idol theme and runs with it.

The songs in this game are professionally done, and some of the songs have become some of my favorite idol tracks in a while (specifically Reincarnation, Dream Catcher and Black Rain) the sound design just really sets the mood for the game. It’s just a shame there is only one battle theme, it’s a good track, don’t get me wrong, but it can get a bit tiresome after hearing it for the 20th time in a dungeon. That being said, the soundtrack is really top notch and fits the game’s tone very well.

Overall, Tokyo Mirage Sessions is a labor of love from both Intelligence Systems and Atlus. This game is also looking like it will be the last major title on the Wii U this year that I am looking forward to. If you are a fan of Atlus’ JRPG’s such as Persona or any of the other Shin Megami Tensei spin offs, this game is definitely worth checking out. The game’s charm has a life of its own and deserves to get a lot more attention than what it is currently getting.

I should also mention again, this is a first impression based off of playing through the first chunk of the Japanese version of the game, my opinion is subject to change upon completing the English version (I may be studying Japanese but it’s still at a basic level, kanji is my sworn enemy, and, no, not Tatsumi.) That being said, we expect to have a full and in depth review of this game posted once this game launches in the States.