A Review Copy was provided by Idea Factory International 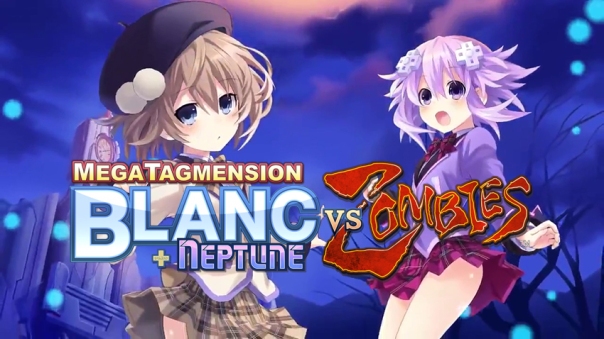 MegaTagmension Blanc is the latest Hyperdimension Neptunia spin off, starring our tough and tiny protagonist Blanc. This game sees itself more as a sequel to Hyperdimension Neptunia Action U in terms of gameplay, but instead of fighting waves of your standard Neptunia enemies you are fighting waves of zombies. Also our characters stay clothed this time when taking damage.  However, the similarities stop there, as this is the first game in the Neptunia series to include a multiplayer feature, and the game works completely around a co-operative experience. But how does this game hold up for being the first multiplayer centered game in the series? Let’s find out.

The story of MegaTagmension Blanc is pretty straightforward, the CPU’s of Gamindustri have enrolled in a special school called Gamiacadmi to study human behavior and to interact more with the humans of their world. But, due to declining birth rates and student enrollment, the school is looking like it’ll close its doors at the end of the year. This is where our tiny protagonist, Blanc, comes in.

The president of the film club, Neptune, is looking to make a movie that will hopefully win an upcoming major film festival to draw a lot of buzz and attention to the school for people to attend. Neptune asks Blanc to help in her endeavors, Blanc agrees on the condition that she gets to write and direct the movie. This is where our adventure begins, but what kind of movie are we filming here? A zombie film of course! What’s more convenient is that a strange force is turning all of the students in the academy into zombies. So it’s up to Blanc and the other CPUs to hold off the zombies invading the school and local towns, while shooting a zombie movie in the process. Talk about killing two birds with one stone.

So how does the main story hold up on its own? Quite well for what it’s worth, given the fact that the game’s main story can be cleared in about six or seven hours depending on how well you do in the story. While the story in and of itself is quite short, it is still very charming and enjoyable as we watch our CPU’s and friends come together to try and make a movie. The character interactions in the story never failed to make me laugh and it was a good time from start to finish, however, it was nothing ground breaking either. It was a quaint tale to string along various different missions to get the player ready for the games real task, the multiplayer.

But before we talk about the game’s multiplayer, let’s first discuss the gameplay. At the start of each battle, you get to pick two characters to play as. Each one has their own fighting style ranging from fast paced (but weak) combos that can cover a lot more enemies on the field, to slow moving (but powerful) combos that can send enemies flying. It is important to find the perfect playstyle for yourself, or you are going to be in a world of hurt. 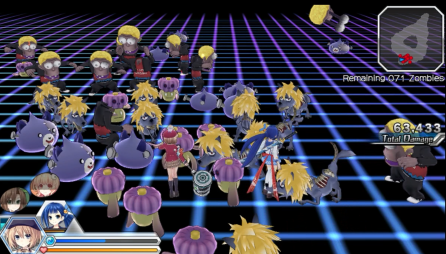 Personally, I prefer faster characters who can move around the map with ease, but I did try my hand in some of the more powerful characters like Vert. The combo system is extremely interesting, however. You learn more combos by leveling up and spending skill points on your technique tree. The different combos you can perform also work well against certain factions of enemies, there are airbound combos that you can perform once enemies go airborne, combos that allow you to rack of a vast amount of damage against a hoard of enemies and strong attacks that work well when facing off against a single boss enemy. There are also exe combos you can perform when your exe drive fills up, these are powerful attacks that can make quick work of a lot of enemies on screen and can do a large amount of damage to boss enemies. My only real complaint about the combat, however, is that the camera is extremely odd. 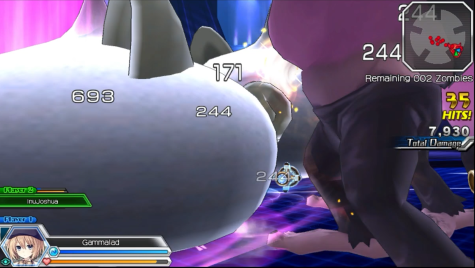 There were many times I would die, not because I wasn’t doing good, but because the camera was in an odd angle, pinning to me to a wall and I had no idea which way enemies were coming from. Even when I recalibrated the camera I would soon find myself back into the corner once again. Another issue I had was with the games lock on ability, when you lock onto an enemy you get to see how much HP you have and the camera focuses on that one enemy. However if you lock onto the wrong enemy, such as a tiny dogoo over the giant boss about to smash your face in, your camera will completely focus on the dogoo. This makes the lock on system more of a chore than what it’s worth and I only recommend it if you have cleared out all of the other enemies before the boss.

The game also offers a lot in terms of unlockables, by playing through the story mode and the online missions you can unlock different weapons and costumes fo

r playable characters. These costumes add a nice personal flare to the characters you can play as, as there is a plentiful amount of costumes to be unlocked and countless amount of combinations to wear them.
However, a lot of these are purely cosmetic and will not affect your gameplay performance in a positive or negative way. Unless you get distracted by a teeny tiny Histy sitting on top of Blanc’s head.

This brings us into the game’s multiplayer. The multiplayer, in a nutshell, is basically the same as the single player, but expanded and with friends. A thing I didn’t like about the single player was that the maps at times were too big and you would only be using a fraction of it to fight in. 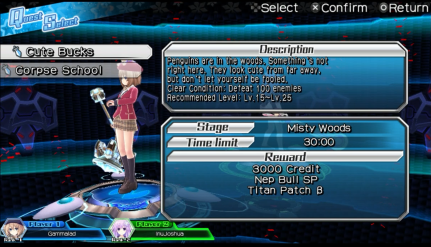 However, in the multiplayer this is simply not the case. In the single player you have to choose which scene you want to “film”, from there you are given your objective and, as a team, you carry it out as you see fit. Depending on the mission you can all be together defeating a huge hoard of enemies, or dividing up into teams to take out boss monsters at different parts of the map. I had a lot of fun playing through the game’s multiplayer, for some reason, having friends to join in on the zombie slaying mayhem made it more satisfying. I just wish the game would have added a bit more of a competitive aspect, there’s no experience or money bonus for slaying the most enemies or anything. I think adding that would have gone a long way to encourage players to fight even harder. Also if you don’t want to play online with others you can set up a local multiplayer room for local co-op or to do the multiplayer missions on your own.

Finally, let’s talk about this game’s length. The single player campaign can be beaten in about six hours across 12 “scenes”, however, the game is set up in a way that encourages you to play through certain scenes again with different combinations of characters to unlock alternative scenes different from the first time around.

A lot of these alternative scenes were quite humorous and it was a good way to level up characters I didn’t give much attention to in my initial play through. Oh and I should mention, to see some of the Neptunia branded humours fan service you gotta work extra hard this time around to unlock those scenes, they aren’t just going to give it to you this time. However with the amount of unlockables this game has to offer, you will be going through a lot of missions to grind for materials for the best gear to fuse better items. Also the game has a bunch of content that can be unlocked through playing the multiplayer as well. Overall, after you complete the story there will be more than enough to do to keep you coming back if you enjoyed the game’s overall presentation.

MegaTagmension Blanc+Neptune Vs. Zombies is a very solid first attempt from Compile Heart at a multiplayer Neptunia game. While I cannot recommend this game to people who are not already fans of the series (if you want a good starting point, check out our Megadimension Neptunia V2 review here.) this game is a fun addition to the Neptunia series and fans will get a good laugh out of the charm and wit of the story while beating up hordes of zombies as their favorite characters. The school aesthetic is also worth the purchase alone, I mean come on, school girls AND fighting zombies, that should sell you on the game right there. 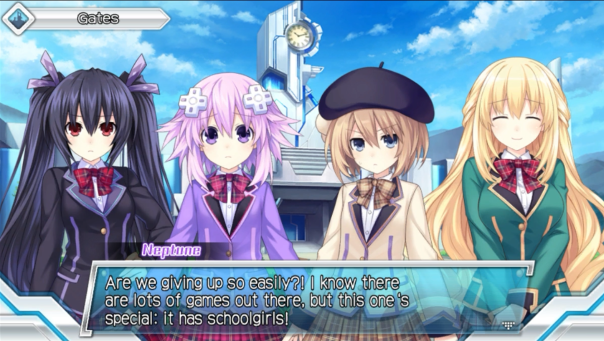