Thank You Idea Factory International for Providing a Review Copy

MegaTagmension Blanc+Neptune Vs. Zombies originally released on the PS Vita back in May. I found the game to be quite enjoyable, but felt it was held back due to the limitations of the PS Vita. Recently,  Idea Factory International has released a PC version of this game, which begs the question: does the limitless potential of the PC help negate some of the original game’s flaws? Let’s take a look.

Before we get started, I should probably open with what my current PC specs are. I am currently running my gaming rig with:

So with that prefaced, let’s get into the overall part of the review.

In this review I will not be delving too much into the single player campaign as that, for the most part, remains unchanged. (You can read up on all of that in our review of the Vita version here.) With that said, I still found this game’s story very charming and it was a delight to roll through it a second time. The structure is still the same: you go through a few scenes where Blanc and company are filming their movie, and then you get into a battle where you have to clear out all of the enemies within the time limit.

Right away you will notice the difference between the PS Vita version and PC when you enter into a single player mission. I was able to get this game running at 1080p 60fps with no problems whatsoever. Even in the more hectic moments on screen I never noticed any real dip in the game’s frame rate, unlike the Vita version where if you were to try and clear too many enemies at once you would be looking at near single digit frame rates. Being able to play this game in a steady 60fps made all the difference in enjoyment in this game. I did not drop nearly as many combos as I did in the Vita version, and I found it easy to get my bearings straight when in frantic fights as the entire game is just so much crisper. All in all, this game is far superior to the Vita version in the graphics department.

The gameplay for this game is still the same as the Vita version. You are tasked with picking one of your favorite Neps and having them take on a hoard of zombies in a certain time limit. While it may sound a bit mundane, once you get into a rhythm of things with your favorite characters, you will be surprised how much time you will spend on this game with friends. All of the characters play very differently from each other and have a variety of different combos to choose from, so you will never feel like you will run out of different ways to play the game. 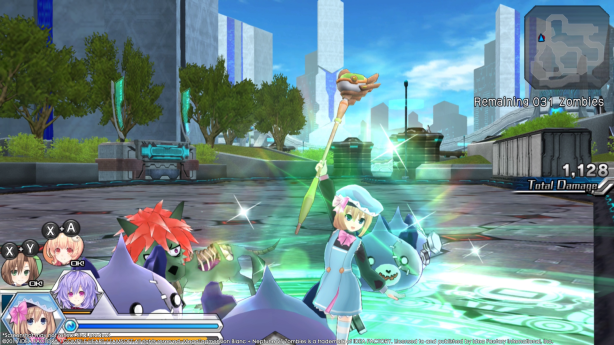 The online mode was also still a real treat. This being Compile Heart’s first multiplayer Neptunia game, I was able to play this game with my friends, when we were able to actually get into a server. There were some issues with playing with my international friends, but that was fixed by changing the download region on Steam. That being said, it is a bit disappointing that this game launched with poor server issues that I never experienced in my time on playing this game on the Vita. It is good to note however that Idea Factory International is working hard to get a fix for this. That being said, it’s here for now and it really can take away a lot of the draw from the game if you can’t get in a lobby with your friends.  Speaking of the lobby, I also encountered an issue where random people could still find their way into our lobbies even if we were to put a password on it. I am not sure if this is a bug or not, but I do hope this gets fixed as well.

Next I would like to address another issue that I had on the Vita version of this game. The lock on system. While the lock on system feels a bit more improved in this game, I still had the issue where the camera at times was unable to keep up with the action that was happening on screen. It could also just be me, but the lock on system in this version of the game now targets higher priority enemies over random dogoos. What I mean by this is that, in the Vita version, when I was fighting a boss in the single player mode or online with friends, the lock on would not always lock onto what I was actually looking at. So instead of the boss I would lock onto a random enemy. While I did have that problem happen every now and again on here, it is a lot less frequent and to me and makes the lock on system a bit more viable in this version of the game than on the Vita. 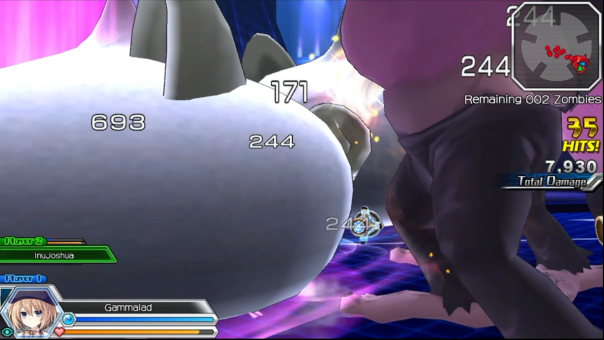 An example of the wonky lock on system from the Vita

Overall, MegaTagmension Blanc + Neptune Vs. Zombies is an all-around solid first attempt by Compile Heart to bring Neptunia into the multiplayer world. With the game now on PC, the game’s performance is greatly amplified compared to the Vita, and to me the game feels like I am playing the game that Compile Heart intended for us to play. A very fluent hack and slash multiplayer game with our favorite waifus. If you are a fan of the Neptunia series and have not picked up this game yet, I highly recommend this game to you; the Neptunia style spin on the zombie genre and the endless hours of hack-and-slash action with friends will surely draw you in. 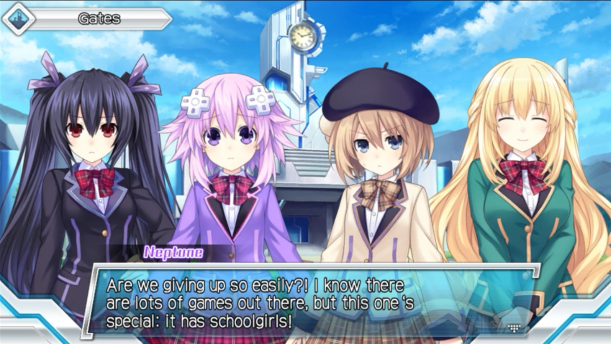 +Multiplayer is still a lot of fun

-The lock on system is still very wonky

-Online problems when getting into a lobby

Posted on October 10, 2016, in Neptunia, Reviews. Bookmark the permalink. Leave a comment.