A Review Copy was Not Provided by Nintendo

Metroid Prime Federation force is a new spin off of the critically acclaimed Metroid Prime Trilogy. Taking place after Metroid Prime 3 the Space Pirates are up to no good again and it’s up to the Galactic Federation to find some way to counteract them. Does this controversial game excel at what it does? For this review the game was played on New 3DS and used the Zero Suit Samus amiibo.

The story is a follow up to the 2007 Metroid Prime 3, so if you have not played that game, you will not understand some references or some plot details. Planet Phaze has been destroyed finally getting rid of the Phazon menace. The Space Pirates activity have been very quiet but that doesn’t mean they aren’t a threat. The Galactic Federation created an elite squadron known as, “the Federation Force,” containing highly trained Marines taking control of Mech Suits to combat some of tougher members of the Space Pirates. 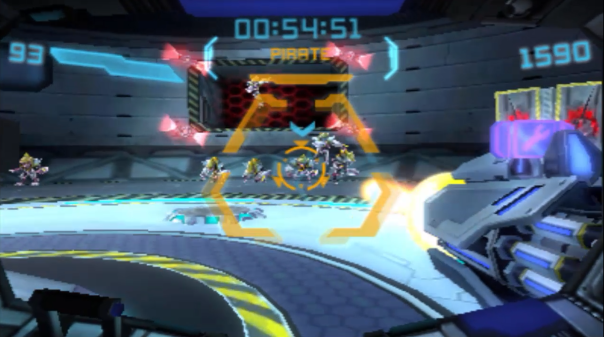 The story is very simple, but works for what it is trying to do. If you want more detail you can scan computer stations scattered throughout missions to get some context on what happened to that area before you arrived. It makes the areas you visit feel like real places where people inhabited and become more curious as to how it was like before. An example of this is a research station that has been nearly destroyed, yet one computer still functions and tells you what took place. It made me visualize what it was like before the creatures attacked. If the player doesn’t care about the mission logs, then they can just skip them and keep playing. This makes the story non-intrusive and almost a reward for exploring. For what it was, it conveyed what it was trying to do properly.
Unfortunately, the same cannot be said about the presentation as it doesn’t convey the atmosphere very well. The graphics are very simple and because of that, all the details you would find in an atmospheric experience are missing due to the fact that the areas are very cartoony. The music tries to be very atmospheric and it works for what the game wants it to be, but doesn’t match the environments. The art style itself is not bad, but what the game wants convey needed something with more detail. However, this is the only area the game falters quite a bit.

The gameplay is heavily focused on customizing your Mech suit, playing online or locally with friends, and fast paced first person shooting action. The game is set up with a mission based structure where you’re in an area for about 10-30 minutes and when you’re done you leave and move onto the next mission. Soon after playing the game you’ll be able to choose missions out of order, giving a sense of non-linearity. Not only that, the mission variety is very good as you’ll be focusing on different types of puzzles, or taking down enemies. The game rewards you by killing as many enemies as possible, completing it as fast as you can and finding all the collectibles. If you complete the mission meeting its requirements you can get all three of that missions medals. However, it is very hard when doing it solo since a lot of levels are built around two-four people doing tasks together to make the levels go by faster than they would alone. That doesn’t mean the game is impossible by yourself, but the completionists may want to find people to play with. However, that alone is insufficient as you can customize your Mech suit to do more damage, auto repair when your health drops to 0, fit it with more defense or even more room to use more weapons. Before a mission you can fill up your arsenal with a variety of weapons such as the iconic ice beam, missiles or the ever so wonderful super missiles. You’re limited to a small amount of space but as you continue on throughout your adventure you’ll be able to upgrade that. Customization doesn’t stop at the mods as you can give your mech suit a paint job you can unlock. Paint jobs can be unlocked by completing missions or with the power of Amiibo. Specifically the Amiibo that are relevant to the Metroid franchise. The Samus Amiibo unlocks a skin that makes your mech look like the Varia suit from Metroid Other M, while the Zero Suit Samus Amiibo unlocks a skin that gives the mech suit a Zero Suit Samus color scheme. Though these two suits have special bonuses, with the Samus Amiibo allowing each missile pack to give the player ten at a time. The Zero Suit Samus Amiibo powers up the slow beam. Other amiibo unlock other skins you can earn in the game.

The online mode for the game is probably the optimal way to experience Metroid Prime Federation Force as the missions are based around tasks that can be completed faster with more than one person. This aspect of the game is done really well since the online is very stable with very little stuttering and disconnects. The only downside side is the lack of voice chat so you’re forced to choose from a list of prompts to get your friends attention. This can cause the gameplay to get very hectic when with chat it would be a smoother experience. You’ll have to use third party chat apps on your pc to chat with your friends as you play. Other than that, this game has very good online play.
The only other mode this game has to offer is the blast ball mode which 3DS owners have had access to for a couple weeks now. It is a 3 versus 3 mode where you compete in a game of soccer using Metroid Prime Federation Force mechanics. You shoot the ball across the arena to score a goal. You’ll gain power ups during the match to gain the upper hand over your opponent but if you lose all your health you will be ejected out the mech suit and you’ll have to quickly run back to it which could place a handy cap on your team. It’s a fun distraction but you won’t be missing out much if you choose to not play this mode.

Finally, the control for the game is the weakest part of the gameplay experience. The control set up is simple, A to shoot, B to jump, Y to use your sub weapon, L to lock on, R to activate free aim and using the gyroscope to aim. This scheme works well, but because of the way the 3DS is shaped it has caused hand cramps to occur and required a break to make the feeling go away. Metroid Prime Federation Force seems like it should have been made for the Wii U as I cannot see this issue happening with the game pad. There are other control options so try to use what works best for you.
Overall, Metroid Prime Federation fails to give a truly atmospheric experience due to its presentation being held back by the art style they chose. The gameplay more than makes up for the downsides and is definitely worth getting if you’re looking for a fun experience. I’m glad I gave this game a chance. However, due to it being a spin off, it is not the Metroid experience you may be looking for. 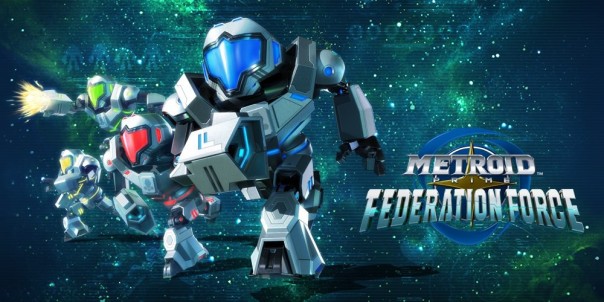 7.5/10
+Fast Paced Gameplay
+Great Online
+Solo Play is viable
+Customization
-Controls can be hard for long play sessions
-Presentation does not convey what they intended

Posted on August 19, 2016, in Reviews. Bookmark the permalink. Leave a comment.