The King of Fighters 14 Review

Thank you Atlus USA for Providing a Review Copy

The King of Fighters XIV is another entry in the Japanese fighting game franchise by SNK. Does the combination of fast paced action and story driven plot meet the standards of the fighting game genre? Let’s take a look.

( For this review, a PS4 dualshock controller was used to play the game.)

The game’s presentation is remarkable. Though, some models have questionable aspects to them; like Mai Shiranui’s hair, which looks like plastic. Yet, the animations for each characters are very expressive, giving personality to its cast. The backgrounds have details that pop out and show that this is a universe with a living, breathing world. The moves you can pull off in this game are very flashy, and make the screen light up with visual splendor. The sound design is awesome, with amazing sound effects that drives home the sensation of a solid punch. Pulling off a long combo will make the player feel powerful due to this. The music is catchy, but also very forgettable; however, the intro to the story mode has an amazing opening song that gets you pumped up for what lies ahead.

As much as I would like to talk about the story mode, it is pretty much non-existent. Aside from two cut scenes featuring comedic dialogue from the champion of the King of Fighters tournament, and the intro to the final boss, there is pretty much no story to this game. There are character interactions between certain fighters if they know each other, due to lore and backstory, adding a decent amount of flavor text. Unfortunately, other than that, you just pick three characters and fight to the end. It takes one hour or less to beat and after that you can either replay it or go on to another mode.

The other modes in this game are training, tutorial and mission mode. These modes will help you learn the mechanics very easily, as they are very detailed. Because of this, even casual fighting game fans can pick the controls up quickly. Time trials, in the meantime, is just a mode to help you see how fast you’re executing combos, and taking down the opponent.

Versus mode is your standard arcade fighting mode that allows you to fight your friends locally. You can do team battles where you each pick three fighters and try to be the last one standing; or, you can do a standard single battle with your favorite character. This is where you will get the most enjoyment out of the game, aside from online play. 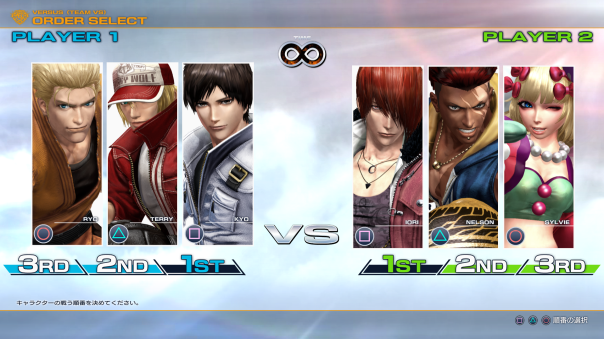 Online play will depend on both players. While there were times where it played rather smoothly, there were also times where it stuttered or even disconnected. Although, if a stable connection is made, prepare for a faced paced online fighting game that provides hours of fun with friends or strangers. You can even go into ranked mode to test your mettle against players around the world, or go into free mode if you would rather just want to play casually.

Other than these modes there is not a lot to do in The King of Fighters XIV unless you’re a competitive fighting game fan. It lacks a substantial amount of single player content and side modes to keep players busy. It’s a real disappointment that the game lacks in this department since the gameplay itself is so satisfying and fast paced which makes me want a more in-depth single player mode that takes advantage of it.

In terms of mechanics for the fighting gameplay, it is very fast paced with a lot of depth for those who will dedicate their time to understanding what the game has to offer. You have your light punch, heavy punch, light kick and heavy kick standard moves, but with the help of inputs like a quarter circle motion and the combination of other attacks you can pull off flashy moves that sound like they pack punch, giving the player a feeling of satisfaction. Guarding is done by holding the direction to the opposite of your opponent, but don’t guard too long! Your guard can be broken, leaving you wide open for punishment.  So the best defensive tool will be the evasive roll you can do by pressing right or left on the d-pad and then pressing square and x at the same time. Just make sure you’re dodging at the right time, because if the opponent doesn’t have a lot of end lag with their attacks they WILL be able to punish you. If you’re in a pinch, you can power up your character temporarily by pressing R1.

Overall, “The King of Fighters XIV” has a good presentation with expressive characters and fulfilling gameplay. It is a fighting game aimed at competitive players, but not casual consumers, despite it being casual friendly with all of its tutorials and modes that help teach mechanics. Versus mode and online will be what most players turn to in terms of the games content. It’s a shame that the game doesn’t offer much else.