Thank You PQCube for Providing a Review Copy of this Game.

Steins;Gate 0 is the sequel to the marvelous visual novel “Steins;Gate” for PS3, PSVITA, PS4, and PC. Due to the nature of a visual novel the story is integral to the main experience, thus this will be spoiler free. However, to fully appreciate the game, knowing the events of the original Steins;Gate is necessary to the experience. This review will be talking about the true ending of the original game when it comes to the story summary.

The world of Steins;Gate 0 takes place on the beta world line, a where Kurisu Makise is accidently killed by Okabe Rintaro. He traveled back in time over and over using Amane Suzuha’s time machine to try and prevent this from occurring. In the original game there was a true ending where Kurisu lived, thus creating a perfect ending for the main cast. However, for the sequel the developers decided that the story should branch off from the pivotal moment of learning that in a possible universe where he accidently kills her, he gives up and refuses to try again.

Throughout the story you’ll see Okabe Rintaro constantly being haunted of that traumatic experience; he goes to therapy and takes anxiety medication to help cope with the trauma. Characters will point out that he’s changed and when they look into his eyes, all they see is sadness. This is a very realistic approach to trauma and made me really connect with Okabe even more than the original game. However, there is a consequence that came from choosing to not save Kurisu and that is in the form of World War III. Kirisu was carrying important documents that were stolen by her father soon after her death. These documents were related to the creation of a time machine and were the cause of a cold war involving Russia, the United States, and Japan, resulting in the loss of five billion lives. Amane Suzuha came from the year 2036 to prevent this “hellish” world from ever occurring, but because Okabe refuses to save Kurisu (so he doesn’t have to re-experience her death) Suzuha sticks around trying to convince him at every turn. 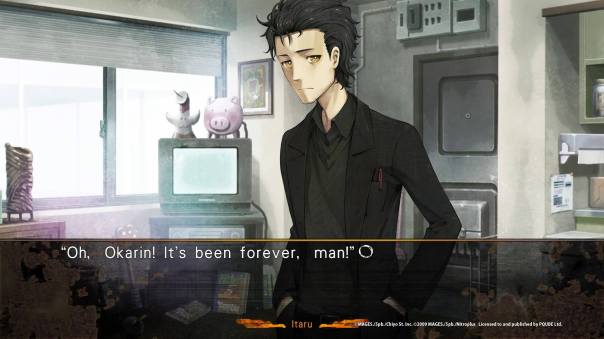 Throughout the story we delve deeper into the lives of characters, new and old, learning key details about their motivations and convictions. Itaru Hashida is a character who is integral to the creation of time machines and received much needed spotlight and more character growth. New characters such as Hiyajo Maho add more charm to an already excellent cast of characters and enhance the experience. This is even more apparent as Okabe isn’t the only perspective we view the story from as the player will often switch between various characters’ views such as Amane Suzuha and Hiyajo Maho.

The story can only be described as a slice of life and science fiction. The characters will bring up various subjects relating to biology, engineering and psychology. The game kindly gives you definitions and explanations in a menu labeled as tips, so the player isn’t confused or lost. However, that’s not the only thing you’ll learn about in the tips menu as the world these characters live in has its own variations on history and pop culture. They’ll reference various political figures in the real world and give them different names. This also includes the large amount of internet slang the characters keep using due to how involved in Otaku culture the cast is. You may even recognize some animes the game parodies such as “Juju’s Bizarre Adventure.”

As a visual novel Steins;Gate 0 doesn’t have much to offer in terms of gameplay, but that comes with the territory because the genre is heavily focused on story. What gameplay Steins;Gate 0 does have is revolved around Okabe’s cell phone. How you respond to text messages and phone calls will affect the ending of the game, and unfortunately it isn’t very obvious when these instances occur.

New to the phone mechanic is the Amadeus application. Throughout the game you will talk to an artificial intelligence based on a character in the game. The player’s ending will highly depend on interactions with this app. Sometimes the app will call Okabe and you can choose to ignore it, or answer. There will be times during an event where the game does not tell you to call the app, but you should to make the AI happy. This can be very frustrating when trying to achieve the true ending, however the game makes it convenient to try to fix choices due to the generous quick save mechanic. At every important story event the game will make a quick save to return to if the player did not like their choice

Lastly, the presentation for Steins;Gate 0 is absolutely marvelous, and only adds to the overall experience. Excellent character designs and art direction make this series stand out from other visual novels. It makes the experience feel special and the varied expressions each character gives adds to the overall charm of the game. However, looking back at the original Steins;Gate, there was an art-style change between games. The original used dark shadings for the character portraits, while Steins;Gate 0 uses brighter shading and colors for a more conventional art-style. This is very noticeable as characters look completely different between games. This is a non-issue in and of itself as Steins;Gate 0’s art direction is still magnificent. However, the game re-uses character portraits from the original and when put next to the updated art style it is jarring. This is especially so when the same character has an updated portrait to match the art style, but for a specific chapter they revert back to the old look. Other than that one issue, visually, Steins;Gate 0 is breathtaking thanks to its beautiful artwork. Sound is also excellent and while it is disappointing that there is no English cast, it really isn’t an issue, just something to make a note of. The absolute best part of the sound design is the soundtrack. From energetic tunes to somber pieces like “Gate of Steiner” the game knocks it out of the park and had me searching up the soundtrack on YouTube immediately. 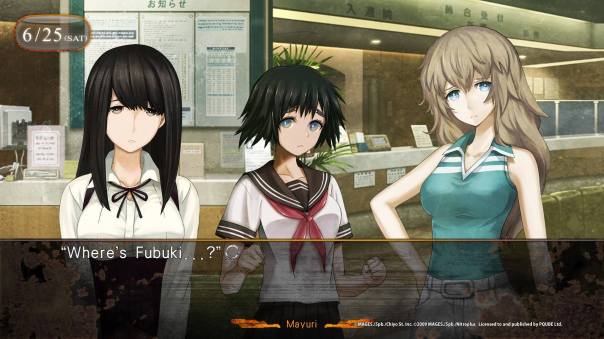 Overall, Steins;Gate 0 is an exceptional experience and should be on the radar of any visual novel fan. If you’re not a fan of the genre you won’t find much here to enjoy due to how the story centralizes around reading text, but for those who are, you’re in for a treat.

Posted on November 26, 2016, in Reviews. Bookmark the permalink. Leave a comment.