Mary Skelter: Nightmares Review – This Fleece is Pink With Blood

Thank you Idea Factory International for allowing us to review the Vita version of this game.

It’s been about a year since I’ve played a DRPG. It’s been a year since I’ve played MeiQ, the game that made me take this much time away from the genre. Yet here we are, with IF taking on the genre once more (albeit this one not being a Makai Ichiban Kan title) by the name of Mary Skelter: Nightmares. Thankfully, unlike the last one, going through Mary Skelter isn’t a living nightmare. 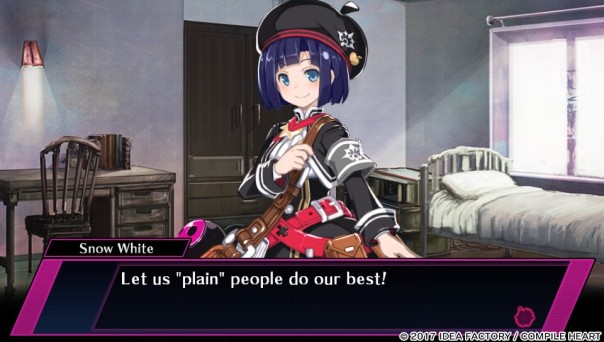 In Mary Skelter, you live in a living breathing organism called Jail. Outside of the few humans that live in Jail, Jail is run by the inhabitants called Marhens who essentially torture the people they’ve caught. One day after Alice (a dear friend of yours) comes to visit you after her daily torturing, Red Riding Hood shows up to break Alice out of prison as she is a Blood Maiden. Blood Maidens are the only people who can effectively fight back against the Marchens. Luckily enough for you, both you and Alice are inseparable so if she goes, you go. Problem is, you’re useless – effectively a meat shield. Regardless of your usability, you’re taken to Dawn, a group of people who’ve made it their mission to escape Jail. 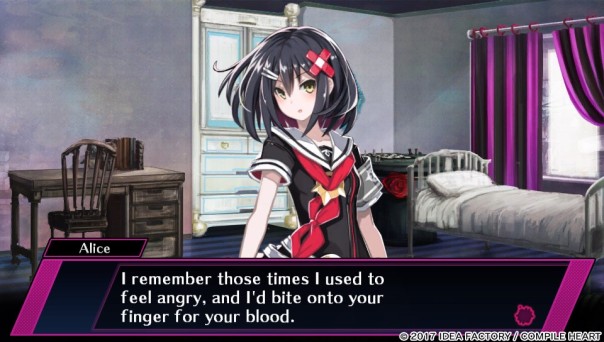 Mary Skelter is a first person Dungeon Crawler at some of its best. As per usual, the maps are grid based with you filling out map by walking on every section of the map. Didn’t walk on that one part of the map? That part isn’t filled in, so it’s best to do it even if you know it’s a trap so you aren’t bugged about it later and waste your time backtracking. Most battles are completely randomized with some being scripted as the map will have an enemy placed at a specific spot as well as the ever roaming dungeon boss – Nightmare. There are some light puzzles to solve and even some Metroidvania-esque elements. Also, you can pick a jobs and even go as far as to purposefully lower your level for bonuses. 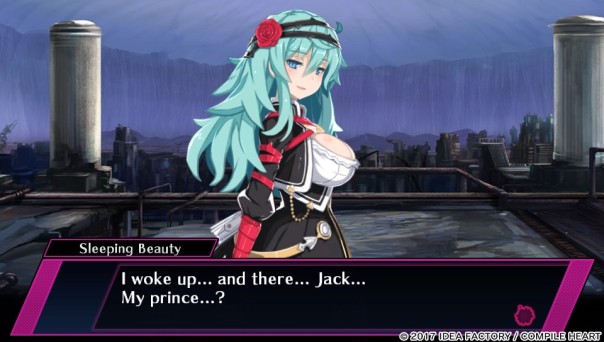 Mary Skelter even adds its own flavor to it by having some fun with its design choices. You see, each part of Jail has three parts that constantly want to be satisfied: Hunger, Lust, and Sleep. Satiating hunger is pretty easy as all you have to do is hit the opponents weakness. Lust is pretty simple as well as that’s pretty much rewarded to you by traversing the map as when you find an item, it goes up. Sleep is awarded by going periods of time without getting hit. Once one of these conditions are fulfilled, you are rewarded with a random buff chosen from a roulette. This is extremely beneficial in battle as it can either be a free health, a buff, or even damage to the opponent. 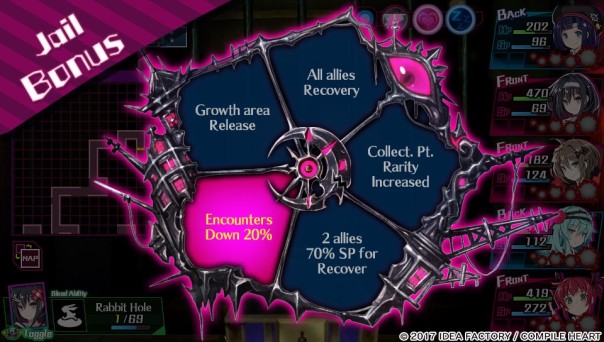 Remember when I said you were only a human shield? Well, that wasn’t a lie, but that wasn’t the entire truth either. In the beginning yes. Outside of managing items, the only real thing you could do is choose a party member and take their oncoming damage. Be warned though, doing this will leave you stunned for a few turns, so if you needed to use an item, well too bad. Game over now. Of course, as the game goes on you become more than a meat puppet. Turns out you’re a Blood Youth, how lucky. Turns out your blood relives the girls of agitation and prevents them turning into a Blood Skelter – a mode where the girls are powered up, but you can’t control them and they will attack both sides. 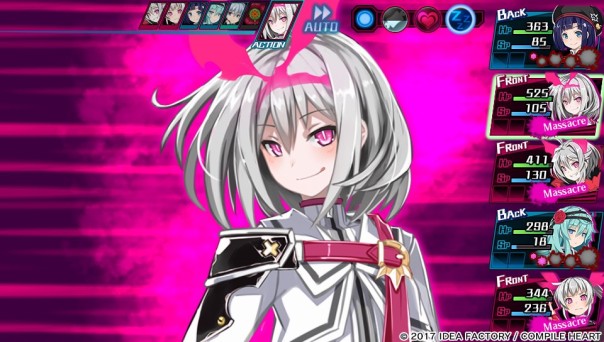 Blood is a very important part in battles. And I don’t mean their life blood either. While sure, you have to make sure everyone has enough HP to survive the next oncoming attacks, making sure they aren’t constantly attacked is just as important. Should that happen, the blood on them will blacken. If it gets dark enough, they turn into that Blood Skelter I mentioned earlier. You do have the ability to turn the blood on them into the proper color, however, if you keep doing it, you’ll increase your risk of not being able to move for a few turns. Blood can be gotten on a girl from either overkilling an enemy or attacking their weakness. When there is blood on them – that girl can be licked. The person doing the licking will typically gain a bonus whether it be health, rejuvenating HP, or some buffs. Should a girl have enough blood on them, they’ll achieve merciless mode. In this form, attacks give back HP and SP and the girls have access to a special skill. Should an enemy be defeated while a girl is in this form, whoever is will recover HP and SP. This form only lasts for so long though, so be sure to use and abuse it as much as you can. Should you beat down an enemy enough, their blood will actually splatter onto the game world itself. 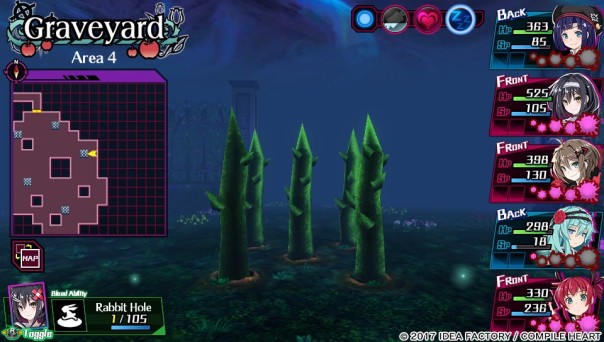 The best part about that is the fact that there is an actual gameplay mechanic behind that. Choosing to play the game on normal or hard is more than the normal “enemies are stronger” situation. It plays with risk and reward as battles give more experience and money on hard than they do on normal or easy. But easy mode gives you access to the minimap when a Nightmare is nearby. This is absolutely important as bosses can’t be killed – only stunned until you destroy its core. That said, when you’ve accidentally wandered into the bosses zone you lose access to the minimap unless you’re playing on easy and the boss will continuously chase you until your get out of its reach so the minimap is very important so you won’t get lost. So what does the blood splatter have to do with it? When you get into the bosses territory, everything is dark, so while sure you don’t have access to a map, the blood splatter will actually brighten the area a little so you can at the very least see where you’re going.

Blood also has a roll out of battle as well that isn’t just blood splattering in the dungeons. Later on, by using your own blood to purge the corrupted blood on the girls, they will receive boosted HP and SP stats the next time they go into a dungeon. This effect only lasts until they’ve been knocked out or you decide to leave the dungeon. 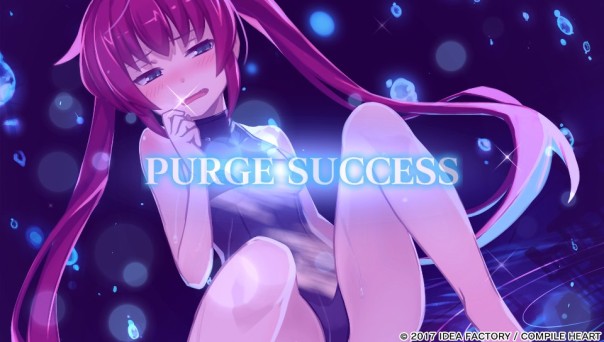 For what it is, the game looks nice on Vita. The CGs look great, but they feel far and in between which is too little for my tastes. However, my biggest complaint are the monster designs. There isn’t that much of a verity of them. It’d be one thing if I was facing a monster in one dungeon, and then facing its recolor in another a few dungeons later, but the fact that the game has the recolored enemies in the same dungeon even after adding new ones to the later parts of a dungeon doesn’t feel right. 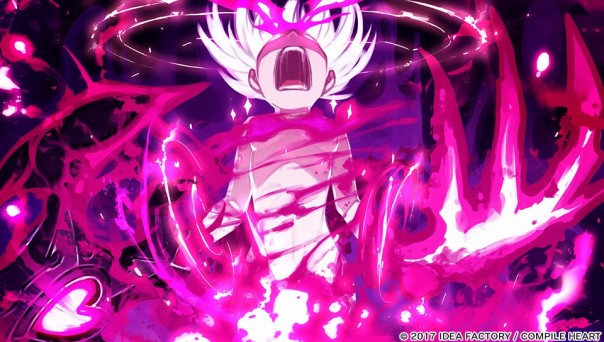 It’d be nice if the dungeons could be marked by the player as well. Sure what they game does mark is nice, sign posts, warps, trap-holes and so on, what it doesn’t mark make up the Metroidvania aspects I mentioned earlier. Every party member has a special ability that can be used outside of battle. Alice can make Rabbit Holes so you can save your game or get back to town, Snow White creates bombs to blow things up and Sleeping Beauty has arrows that can shoot far away targets. The problem is that, when you get to an impassable part of the map, the game doesn’t mark it for you to remember for later and you don’t have a way of doing it either. 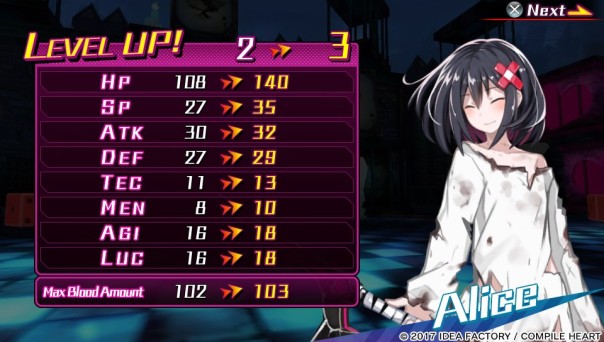 Despite all of its faults, it’s very impressive to see a studio release something like MeiQ to this. While MeiQ certainly had some neat ideas, they fell flat after a while and the game just became boring because of it. While here, the jump in quality from practically every angle can certainly be felt. This game has certainly left it’s mark, as while it’s not the best DRPG out there, it’s certainly a very solid and pretty original feeling effort. 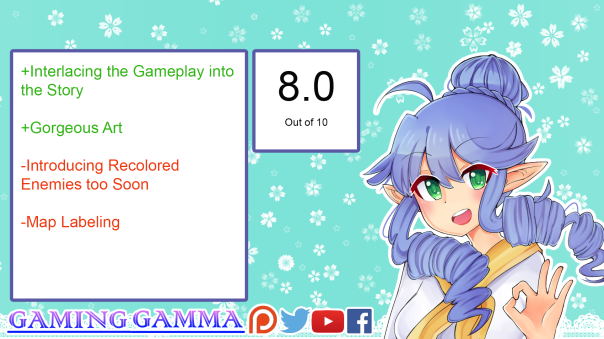 Posted on September 5, 2017, in Reviews. Bookmark the permalink. Leave a comment.