Are you looking for some 3D waifus? Well, look no further! We’re proud to announce that MegadimensionNeptunia™ VIIR (pronounced “V-two-R”) will be coming to North America on May 8, 2018 for the PlayStation®4 system and PlayStation®VR! The European version will be announced at a later date.

This enhanced version of 2016’s Megadimension Neptunia VII features smoother graphics courtesy of a new engine, a revamped battle system, and a whole new VR experience. Now, their dimensions and yours are connected! Hang out one-on-one with each of the Gamindustri Goddesses, listen to their conversations, and watch as the Goddesses react to you!

This remake of the game makes full use of the PlayStation VR to interact with your favorite Goddesses. Stay tuned for future coverage of VIIR, and in the mean time check out our review of Megadimension Neptunia VII 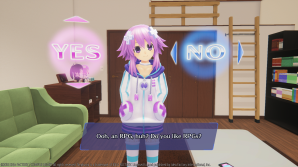